The Best Football Shirts of Qatar 2022

When a World Cup or European Championship starts, and the journalist’s cameras start flashing, attention inevitably turns to fashion. Yet just as much focus is given to what is worn on the pitch as well as off it. A stylish team shirt can have longevity far beyond the tournament, often becoming a relic of beautiful goals and nail-biting triumphs.

As well as this, everyone loves to take home a souvenir when they travel to sporting events. This has led to a whole subculture of retro and modern kit collectors. But when it comes to this year’s World Cup, which has been the most admired? Below, we discuss the best football shirts of Qatar 2022.

The England-away kit is a triumph of design. It looks both to the sixties World Cup winning squad and lends from currently in-vogue nineties fashion. A polo shirt has a different colored collar with a button, reminiscent of the classic Fred Perry look. This is mirrored in the hem of the short arms.

Apart from that, it is pretty simple, and all the better for it. Designed by Nike, it has the signature logo to the right and three lions to the left. It could not get much better.

No doubt a new shirt will arrive for Euro 2024, but it should not stray too far from this on-point outfit. When it comes to the 2024 tournament, betting is already underway. According to the majority of online football betting sites, host Germany is the current favorite to win at +450, despite their lackluster group stage performance at the World Cup. This is followed by England, France, and Spain on +600. Of course, these odds will change so you may want to bet early to get the best price way in advance. Very often, you may find that the lesser favored teams can produce the most desirable and rare shirts for future collectors. Away shirts and third kits also began to command higher prices, as they are available in lower quantities and less often purchased by fans.

In contrast to the minimalist chic of the England kit, comes a fantastically chic effort from Mexico. Where other kits have paired it down, the design by Adidas uses the current trend for bold patterns. A white shirt at its base, the rest is adorned with a faded pattern of traditional Mexican artwork.

Covering the whole of the shirt, it is busy but does not manage to be overpowering. Adidas has its signature stripes on the shoulder and side arms. Apart from this, it is all rounded off with the logo of the national team. An amazing piece of graphics in itself, this bird motif perfectly finishes the whole shirt. It has everything you could want, incorporating the country’s history, its own elements of national art, and its footballing past. 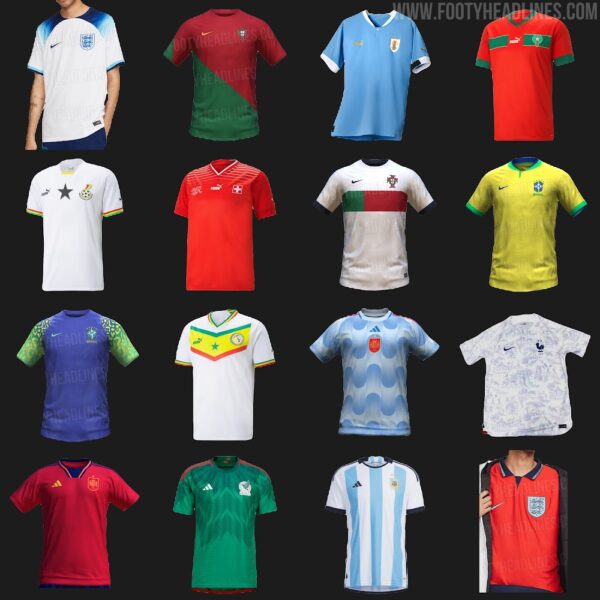 How this one was relegated to a third kit is quite unknown. This time, the design comes from Kappa, who split the shirt up into a patterned motif down the center and plain arms and side columns. The whole kit is resplendent in dark green, with cream piping at the bottom and hems, along with cream brand and national logos.

However, what sets it off is the central design. Just as Adidas have delved into Mexico’s past with their kit, so have Kappa with Tunisia’s. Decorating the front are beautiful motifs from the North African countries’ rich heritage. It is a design that looks fresh from the wall of an ancient temple or ruins in the sand.

The motif itself comes from the shield of a Carthaginian general, named Hannibal. Carthage was the ancient state of Tunisia, and Hannibal was a legendary leader who led them to battle against the Romans. The dark green is also said to represent the rich olive-growing industry in the country, which has endured for centuries.

Puma had quite an odd approach to their kit design for the World Cup. All away kits bore a template design, whereby a large logo sat at the front of the kit to represent the team, and colors changed, but little else. This resulted in Ghana, Uruguay, and other Puma kits looking identical, and it was not a pretty design.

However, they claimed back some respect with their outstanding Senegal home kit. It is a plain white shirt punctuated with the red, yellow, and green of the home country. A band on the collar and arms draws the eye in. Yet the greatest use of tone on the kit is the chevron laid over the chest. Representing the flag, it has the green star front and center making sure there is no chance of misunderstanding where this is from.

Of course, there is a whole host more shirts in the World Cup that you may want to keep as a souvenir. Honorable mentions go to Japan, who look back to eighties anime with their outfit. Get yourself online and bag yourself a stylish piece of World Cup history.