World Cup 2022: The most impressive victories in Qatar so far

Home » Blogs » World Cup 2022: The most impressive victories in Qatar so far

The build-up to the ongoing FIFA World Cup was filled with controversy. But as soon as the football got underway on November 20th, it was finally time for the world’s finest to do the talking with their feet. Qatar raised the curtain against Ecuador just over two weeks ago, but their maiden World Cup campaign couldn’t have gone any worse, losing all three games and exiting at the group stages. Oddschecker, which compares World Cup odds and offers, had made Brazil favourites to lift the trophy this winter, and the Selecao are living up to their billing.

Comfortable victories against Serbia and Switzerland saw them through to the last 16 as group winners before their third and final group game even got underway. To the surprise of many, a heavily rotated side was stunned by Cameroon, losing 1-0 at the Lusail Iconic Stadium courtesy of a last-gasp winner from Vincent Aboubakar. Tite’s side bounced back like champions though. They thumped South Korea 4-1 in their second-round tie, with all four goals coming within 36 scintillating first-half minutes.

As impressive as that victory was, it was an expected one. As such, it doesn’t make our list of the most impressive victories at the 2022 FIFA World Cup. These ones, however, do:

Heading into the second round of fixtures in Group F, qualifications were anyone’s for the taking. Morocco had just earned a battling point against 2018 finalists Croatia. Belgium on the other hand – despite entering the tournament as one of the favourites – had just been played off the park by lowly Canada. Despite that, the Red Devils had the heroics of goalkeeper Thibaut Courtois to thank for keeping a clean sheet, while at the other end, Michy Batshuayi nicked the only goal of the game to steal a 1-0 victory.

Roberto Martinez’s side was less than impressive, however. Post-match, Kevin De Bruyne threw his teammates under the bus, stating that his side couldn’t win the tournament as they were “too old.” It’s clear that there was disarray in the Belgian camp and the Atlas Lions took full advantage.

The Moroccans were the better side throughout, with De Bruyne and co. unable to match the passion and desire displayed by their North African counterparts, who were spurred on by a huge travelling army that was vocal throughout. And those travelling fans were rewarded in the game’s final third when Wolves’ defender Roman Saiss nodded home from Hakim Ziyech’s whipped free kick.

Morocco then doubled their lead in injury time with Ziyech once again the architect-in-chief. He beat two defenders before squaring for substitute Zakaria Aboukhlal to rifle home and send Moroccans from Casablanca to Rabat partying long into the night. 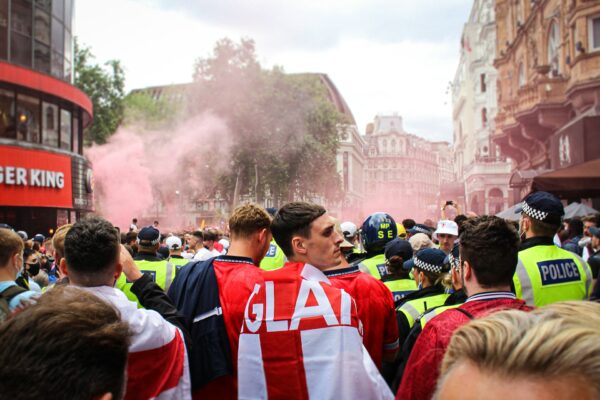 As far as second-round ties go, none of the favourites had a tougher-looking tie on paper than England. While Brazil was thumping South Korea and France was breezing past Poland, The Three Lions had a tricky-looking test against the reigning champions of Africa.

Senegal held their nerve in their final group game, defeating Ecuador 2-1 to progress at the expense of the South Americans. In the second-round tie against Gareth Southgate’s side, they were still the underdogs, but many gave them a fighting chance. But they didn’t bank on the brilliance of England’s teenage sensation Jude Bellingham.

It’s scarcely believable that the Borussia Dortmund star is still just 19 years of age. His incredible talent was on full display as he played a huge part in his nation’s first two goals. He first burst into the final third before squaring for Liverpool captain Jordan Henderson to give England the lead. Then, on the stroke of halftime, he stole the ball from a Senegalese corner and charged into the opposition’s half before finding Phil Foden. The Manchester City man then gave the ball to Harry Kane, who lashed home to double England’s lead.

Bukayo Saka would add a third in the second half, and England had made a tricky last-16 tie look like a walk in the park.