Westfalenstadion is the legendary home stadium of every neutrals’ favourite German side, Borussia Dortmund. Officially the ground is known as Signal Iduna Park for sponsorship purposes in a deal set to last until 2021.

The 80,000 capacity makes it the largest stadium in Germany and the third biggest in the top-flight of football (behind Camp Nou and the Bernabéu) .

Borussia Dortmund’s Westfalenstadion was originally built as a playing venue for the 1974 Fifa World Cup with enough room for 54,000 supporters.

The first match was held on April 2nd against rivals Schalke 04 in a Charity Game as Borussia Dortmund were in a poor financial position at the time.

The first “official” match occurred 5 days later on the 7th of April and this time the home side managed to scrape a point against Bayer Uerdingen.

The newly built Westphalia stadium hosted 4 group matches of the World Cup including three games of the Netherlands including an intriguing clash against Brazil.

After the world cup, the stadium became pretty much unchanged for the next 18 years until the early 1990s when some of the seating was converted to standing areas in 1992.

Spurred on by a Bundesliga tittle in the 1991-1992 season and a runners up place in the UEFA Cup the following season the club’s revenues began to grow which gave Dortmund the financial platform to redevelop parts of the stadium which would eventually occur in three distinct phases.

Fifa World Cup Stadium Dortmund hosted four group matches and a legendary semi final between the home side, Germany and Italy with the Italians winning 2 nil in extra time following a goalless draw at the end of 90 minutes.

Below is a seating plan of Borussia Dortmund's Signal Iduna Park: 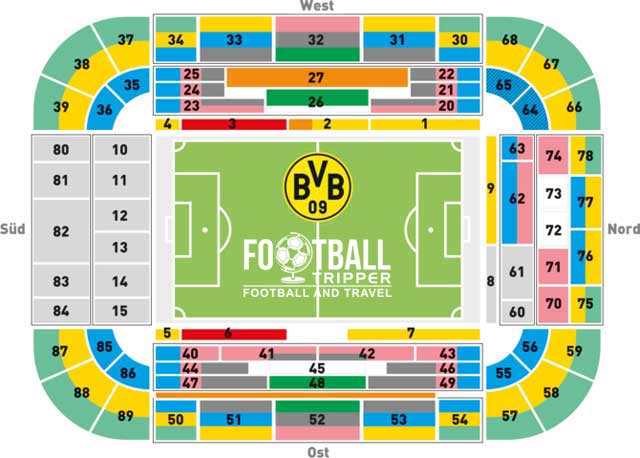 You can break Signal Iduna down into four unique parts: Nord, Ost, Sud and West.

The away section is housed within the central column of the Nord Tribune slightly towards the right hand-side, and whether through a conscious decision or not, away supporters aren’t confined to the corner as they so often are in football stadiums across Europe.

Appearing to be a nice touch by Dortmund at first, one you’ve had a glimpse of the famous Yellow Wall Kop Stand you may be feeling angry your club’s stadium hasn’t got anything like it.

The ticket allocation is usually around 2,000 – 3,000 depending on the opposition, and seating is distributed across both tiers of the north stand between sections: 08, 60, 61, 70, 71 and 75. You can cross referee the seating plan above to see where you will be sitting.

One of the most popular pre-match hang-outs is the large Strobels Bar located north-east of the stadium which serves beer and has a large outdoor area. Inside the ground you can also purchase pints and take them into the stadium which really does help with the atmosphere!

As for drinking either before or after the match in the city centre the highest rated pub amongst visiting football fans is continually the amusingly named Brauhaus Wenkers. Located centrally it has a decent selection of local pilsners and multiple TV screens showing the football.

Around the business park where Signal Iduna is location there are a few dining options before the game such as Steakhouse Rodizio next to Theodor-Fliedner-Heim tram station and the NRW Cocktails bar near to the Westfalenhallen stop. North of the stadium there is also the likes of Mongos Asian restaurant,  Das Allegro and Restaurant de Luca.

Within the stadium itself Strobels Dortmund restaurant comes highly rated and the numerous fast-food stalls and outlets will ensure you don’t starve. Plus you can drink beer in the stands, so what more could you possibly want?

Borussia Dortmund operate several fanshops throughout the city in addition to their very own International Online Store which allows fans the opportunity to purchase goods 24/7 from the comfort of their own home. The most popular one for most fans is located in the north-east corner of Signal Iduna Park stadium across two floors.

Die Schwarzgelben (The Black and Yellows) offer fans the chance to undertake a 75 minute guided tour of the iconic Westfalenstadion, now known as Signal Iduna Park.

The tour costs a more than reasonable €10.00 for adults and €7.00 for concessions, with tours running everyday between 10.00 am and 6.00 pm except on matchdays which coincides with the museum opening times. Tickets can either be purchased at official BVB stores across the city, or at the stadium before the tour with a limit of 40 people per group.

For further information and confirmation of tour times, please visit the official website of Signal Iduna Park. Note: There are no online ticket sales!

How to buy Borussia Dortmund Tickets

Tickets to see Borussia Dortmund play football can either be purchased online, by phone +49 1805 309000, or in person at one of the numerous BVB fan shops throughout the city.

The pricing at Westfalenstadion is very affordable with tickets generally starting at just €16.00 for a place to stand in the Southern Terrace and then up to €30.00 for a seat in the upper corners, with a central positioned seat within the main stand on average €50.00.

As one of the most popular football clubs in Germany, acquiring tickets can often be difficult as most matches tend to sell out – including those against the less popular teams. This means that you might have to search for resellers.

How to get to Signal Iduna Park

Where is Signal Iduna Park?

Signal Iduna Park is located next to the Westfalenhallen conference centre which is approximately 3km South Westish of Dortmund’s city centre.

The Stadium has good connections to the nearby Autobahns with the address for satnav is as follows:

The area around Signal Iduna and Westfalenhalle has over 10,000 metered parking spaces available to use. There is also a free parking and shuttle bus service from the Dortmund Megastore located at Dortmund-Horde, Felicitasstraße, B54 exit Rombergpark.

Trains typically run anywhere between three to four times an hour, and it will cost you no more than a few euros for a single or return.

Alternatively you can take the U-Bahn tramline which may be more convenient depending on your starting location as it has lots of Stations/Stops throughout the city.

Lines 45 and 46 drop you off at Westfalenhallen which is the nearest stop at 5 minutes walk away, with a special service on matchdays going slightly further and taking you along to the next stop, “Westfalen Stadion” which is even less of a walk.

The nearest Airport is located 10 km east of the city and is known as just Dortmund. As it is the second largest in the North Rhine-Westphalia region (Behind Düsseldorf  Airport), it is served by numerous low cost and budget airlines making it ideal for a cheap football weekend.

In terms of ground transportation once you arrive there is an express bus to Dortmund’s main station as well as shuttles to the metro lines and nearby railway stations.

As Signal Iduna Park is situated within a business park area with conference centres there are a few accommodation options such as the affordable B&B Hotel Dortmund-Messe, Mercure Hotel Dortmund Messe & Kongress (Ex Best Western) and Hotel Pullman Dortmund which is just the other side of the A40.

As the stadium is less than 3 km from the city centre you’re probably much better off looking there with the concentric ring road marking off numerous choices such as Park Inn by Radisson, City Hotel Dortmund and Hotel Carlton near the station.

Who plays at Signal Iduna Park?

What is the capacity of Signal Iduna Park?

As of 2022 Signal Iduna Park has an official seating capacity of 81,365 for Football matches.

When was Signal Iduna Park opened?

What is the postcode for Signal Iduna Park?

The postcode for Signal Iduna Park is 44139.

Covid Restrictions may be in place when you visit Signal Iduna Park in 2022. Please visit the official website of Borussia Dortmund for full information on changes due to the Coronavirus.