San Siro or The Stadio Giuseppe Meazza has an impressive history having hosted three UEFA Champions League finals and the 1990 World Cup. Shared by rivals Internazionale and AC Milan, this stadium has been at the top flight of Italian football since it was created in 1925, and can boast the largest capacities in all Italy with a massive 80,000 seat venue.

Originally known as Nuovo Stadio Calcistico San Siro upon opening in 1926 after the Milanese district it is located in, the stadium was one of the first-purpose built football stadiums in the country and was funded by famous tire entrepreneur Piero Pirelli. The 35,000 capacity ground was inaugurated on 19th September when home side AC Milan hosted Internazionale in a lopsided 6-3 defeat.

In 1947 Inter became co-tenants of the stadium and the two greats of European Football have shared the stadium ever since, with the San Siro being officially renamed as the Giuseppe Meazza in 1980.  The legendary Italian striker who was born in Milan played for both the Rossoneri and Nerazzurri although he is usually regarded as more of an icon of Inter having made over 360 appearances across two spells for the club.

For the 1990 World Cup, the San Siro was converted to an all-seater and it was upgraded to the highest category of stadium by UEFA after the addition of an extra tier of seating for three of the four stands. This boosted the capacity up to 83,407 for the event, making the Giuseppe Meazza the second largest stadium in Italy behind the Stadio Olimpico in Rome and ahead of Napoli’s Stadio San Paolo.

The San Siro is set to host the 2016 Champions League final which has prompted many to debate the future of the iconic “Scala del Calcio”.

Whilst it is widely reported that renovations will take place for the event, there is suggestion that A.C Milan could soon leave the stadium and opt to construct a new ground next to their Casa Milan headquarters.

Below is a seating plan of AC Milan & Inter's San Siro: 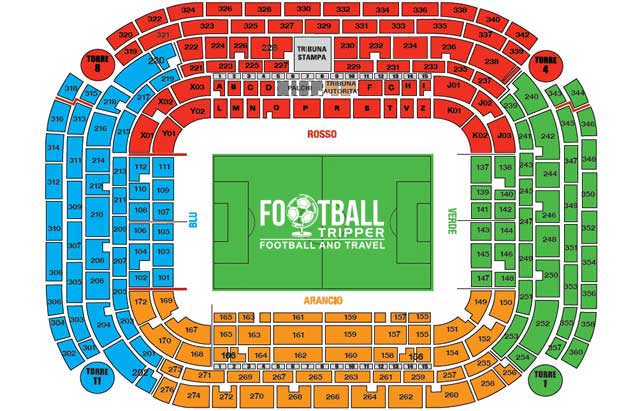 Depending on which team is at home the position of the away fans changes however regardless of which curva the away fans are in the ticket allocation is usually always for the third tier right at the back of the stadium. Below outlines the seating sections for away fans based on who is playing at home:

An easy way to work out where you will be sitting is to find the opposite of where the Ultras for each Milan team sit. Inter = Curva Nord, Milan = Curva Sud.

The neighbourhood of San Siro where the stadium sits isn’t the nicest area of Milan, and there really aren’t many pubs within close proximity to the stadium which are suitable for the average neutral tourist.

The central area of Milan as marked by the ring-road is full of bars and restaurants at every corner and depending on your starting point you might just want to explore the area and use your judgement.

The area directly around the Duomo is usually heaving with tourists however it is a decent reference point and within a ten minute radius you can find some decent pubs either in the sports bar or Irish Pub mould.

As for food the aforementioned advice regarding pubs pretty much stands as well. Within the side streets of the main square there are numerous restaurants competing for trade with young workers outside trying to tempt you in meal deals and cheap prices.

Once you get to the stadium there are a handful of food trucks which sell some fast-food such as fries and hot-dogs however compared to your average English stadia it was somewhat lacking.

Inside the concourses there are mobile vendors who travel around the stands selling popcorn, biscuits, crisps and what appeared to be tubes of Sambuca.

At the stadium there is the permanent San Siro store which is shared by both Milanese teams as well as a number of temporary stalls and outlets dedicated to each team which open specifically on matchdays. It is usually open between 10.00 am – 5.30 pm.

You should also note that both teams operate a club shop within the city centre of Milan. Inter’s is known as Solo Inter and is located five minutes north of the Duomo and Milan’s is around seven minutes east.

Fans can now undertake a stadium tour of the San Siro as part of a combined package with the football museum, with tours generally available seven days a week between the hours of 9.30 am – 5.00 pm.

Available in 9 languages the tour is one of the most popular tourist attractions in Milan, and takes in such sacred areas the tunnel, pitchside, changing rooms and the trophy room.

Tours can be available on matchdays for evening kick-offs but only usually between the hours of 9.00 am – 12.00 pm.

Tickets to see either the Rossoneri or the Nerazzurri play at the San Siro can usually be purchased online, from various locations around the city including banks or from third party resellers which sometimes can be easier.


It’s hard to give exact prices as they are adjusted based on who the opposition is and where about you are sat, however the above is a rough approximation of how much you can expect to pay for either team.

How to get to San Siro

Where is San Siro?

The San Siro is located approximately 6km north-west from Milan’s historical city centre where the famous Duomo cathedral lies, and is found within the Lombardy region of Northern Italy.

Driving to the San Siro is fairly straightforward enough due to the out of town location, however as per other large grounds there’s often a lot of congestion before and after the match which can sometimes be enough to put most fans off taking the car.

For around €3.00 you can park at the stadium where there is around 4,000 spaces available to the general public located to the west of the ground.

Some fans prefer to use the car park northwards at the Ippodromo del Galoppo horse racing track. As a back up you can also find some parking available at the Lotto Metro Station.

The city of Milan is served by several train stations however the two main ones are Milano Centrale and Milano Porta Garibaldi.

Central station has high speed lines to Turin and Bologna (Rome and Naples), and Porta Garibaldi generally offers more regional services for commuters although having said that it does have some Eurostar routes to other countries.

Previously the closest station to the San Siro was Lotto on the Metropolitana Linea 1 (the red one) but since April 2015 there is now a dedicated metro stop on the Purple Line 5.

Known as “San Siro Stadio” it opened a few days before the Expo 2015, and it arrived a year in advance for the Champions League final 2016. It is more or less accessible form all major train terminals throughout Milan. The metro maps can be found in every station and are very easy to follow.

The largest airport is Milan-Malpensa however it is located 40 kilometres north west of the city and is designed to serve the surrounding Lombardy and Piedmont regions more so than the city of Milan which means it isn’t the most convenient.

Milano Linate is a much better option when travelling however as not only is it closer to the city (just 8km south-east), it is also served by a number of European budget airline carriers which makes a weekend away to watch the football much cheaper than you’d think.

Upon arrival you can catch Bus number 73 outside the terminal which will drop you off at San Babila square which has its own metro station on the MM1 red line.

Even if there were lots of hotels close to San Siro (there isn’t) it would be hard to recommend them based on how much more choice there is in the city centre.

The area just outside the main train station (Milano Centrale) is often a decent choice with 15 minute walk to the centre of Milan being a decent compromise between location and price.

Who plays at San Siro?

What is the capacity of San Siro?

As of 2023 San Siro has an official seating capacity of 75,923 for Football matches.

When was San Siro opened?

What is the postcode for San Siro?

Covid Restrictions may be in place when you visit San Siro in 2023. Please visit the official website of AC Milan & Inter for full information on changes due to the Coronavirus.

Why is the San Siro called Giuseppe Meazza?

The stadium has always been known as “San Siro” however in 1980 it was official renamed Giuseppe Meazza in honor of the iconic 2 x World Cup winning footballer who played for both Inter and Milan.