Stadio San Paolo home of Napoli is the third largest football stadium in Italy with a capacity of 60,240 after the San Siro and the Stadio Olimpico in Rome.

The ground is famous for hosting the 1990 world cup semi final between Italy and Argentina where Napoli legend Diego Maradona scored the winning penalty for his country.

Stadio San Paolo first opened in 1959 and was constructed for the 1960 Summer Olympics in Rome. Conceived as a multi-purpose sports venue, the stadium is circular in design as it originally needed to accommodate an athletics track surrounding the perimeter of the pitch.

At its peak size in 1979 the stadium attracted a record attendance of 112,365 during a match against AC Perugia.

Unlikely to ever be beaten, Stadio San Paolo underwent extensive renovation in order to host matches of the 1990 Word Cup which was a tournament which firmly put the city of Naples on the map.

Hosting five matches in total including two group matches and three knock-out games, the stadium was famously the only ground where the Argentinian National Anthem wasn’t booed.

As Naples was the adopted home city of local icon Diego Maradona, the famous number 10 asked Italian supporters to cheer for him, but the Napoli Ultras responded with a tifosi which read “Maradona, Naples loves you, but Italy is our homeland”.

La Albiceleste went on to defeat The Azzuri on penalties in the semi-final at Stadium San Paolo.

Today the capacity of Napoli’s stadium sits at just over 60,000 making it the third largest stadium in Italy behind the San Siro and Stadio Olimpico.

Despite not always being full the San Paolo has some of the highest attendances in Europe, and when the club played in Serie C during the 2005/2006 season crowds in excess of 50,000 were not uncommon. Napoli managed to win two Serie a titles since moving here in 1959.

Maradona wore the blue shirt for seven years and wore the prestigious number 10. He led to them their only two Serie a titles, so it’s understandable why he is held in such high esteem by the Napoli fans.

Below is a seating plan of Napoli's Stadio Diego Armando Maradona: 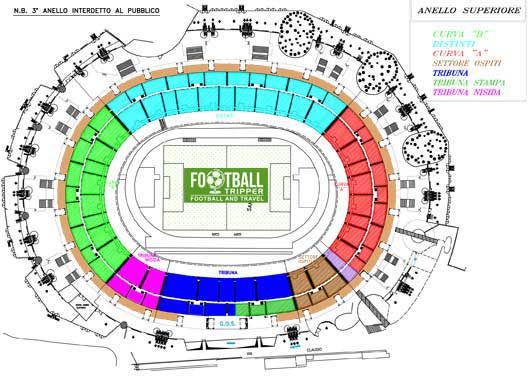 San Paolo is comprised of the following four stands: Curva Nord, Tribuna Est, Curva Sud and Tribuna Ovest which is the main stand.

The city of Naples is full of character and is crammed full of independently run cafes, bars and restaurants.

Although the city’s reputation as being unsafe for tourists is slightly overstated, it’s still best to stick to places which are located within more prominent areas such as the city centre and around the stadium.

The food options inside the concourses of the ground are very limited compared to England but there are plenty of street vendors between the station and the ground selling cheap slices of pizza.

A Neapolitan invention, no trip to the Stadio San Paolo is complete without sampling an authentic crust or two. There is also a unique McDonald’s housed within an apartment complex located on Via Giambattista Marion south-east of the ground.

Fans visiting Stadio San Paolo on matchdays can purchase official merchandise from one of the numerous mobile vendors located around the turnstiles of the stadium.

For a better range of goods, fans can also visit one of the four club shops located around the city or Napoli.

The most prominent one and easy to reach is arguably the one located at the Central station on the ground floor of Piazza Garibaldi. This is usually open 10.00 am – 9.00 pm each day, although double check with the official online store.

There isn’t a tour available of the stadium, and even if there was, it probably wouldn’t be very good.

As great as the San Paolo stadium is on match days there really isn’t much to see around and inside. First opened in 1959, it lacks the commercial aspects of most Premier League stadiums and is set in a run down residential area.

How to buy Napoli Tickets

Tickets to see SSC Napoli play at the iconic San Paolo Stadium can be in purchased online, at the box-office in the days leading up to the match, or from various approved sellers throughout the city centre.


How to get to Stadio Diego Armando Maradona

Where is Stadio Diego Armando Maradona?

Napoli are based in the Southern Italian city of Naples just past Rome and Stadio Sao Paolo is located within the Fuorigrotta area. This sits approximately 7.7 km west of the city centre.

Whilst there isn’t too much on-street parking around the stadium there are a few parking garages which you can use. Mainly located east of the stadium there is The Euroimpresa outside of Mostra Station, and two Autorimessa car parks just off of Via Lepanto.

From Naples centre you could get the line 2 on the metro from several station to Campi Flegrei or hop on the train from the Garibaldi Station to the Napoli Campi Flegrei where the 615 bus takes you straight to the stadium.

Mostra is the closest stop to San Paolo, however it requires you to catch the light blue L6 line which only begins at Margellina Railway Station. Campi Flegrei on the other hand can be caught from the the main train station in the city centre (L2 dark blue) and doesn’t require any changes.

Luckily there is only one major airport in Napoli named the Naples International. This is just a 25 minute drive to the stadium, and even quicker to the city centre as it is located north east of the city.

Once again you are faced with the decision of choosing a hotel near the stadium or near the city centre. It depends if you want a quick get away from the match or if you want to be closer to the heart of the city.

The nearest ones to the stadium appear to be Hotel Serium and Hotel Leopardi. Back towards the centre there are a range of hotels for all budgets and locational preferences – indeed too many to list here.

What is the capacity of Stadio Diego Armando Maradona?

As of 2022 Stadio Diego Armando Maradona has an official seating capacity of 54,726 for Football matches.

What is the postcode for Stadio Diego Armando Maradona?

The postcode for Stadio Diego Armando Maradona is 80125.

Covid Restrictions may be in place when you visit Stadio Diego Armando Maradona in 2022. Please visit the official website of Napoli for full information on changes due to the Coronavirus.