Stadio Alberto Picco is the home stadium of Spezia Calcio who routinely compete in the second division of Italian Football, Serie B. Located in the city of La Spezia which is between Genoa and Pisa on the coast of the Ligurian Sea, the ground first opened in 1919 and has a capacity of 10,336.

After missing the start of the season deadline, the inaugural match of Stadio Alberto Picco took place on 7th December 1919 between home side Spezia Calcio and S.C Genoa. Constructed after the First World War on a plot of land which formerly belonged to the Navy, it originally consisted of wooden stands similar to that of English stadiums of the time.

Named after Alberto Picco who died whilst serving in the Alpine Mountain Unit during WW1, the stadium really began to come into its own during the 1930s. Firstly an impressive stone entrance was created, and secondly a concrete grandstand was inaugurated on February 19th 1933 with a match against Novara.

In 1964 The Curva Ferrovia (The Railway Stand) was built with a capacity of 1,000 and quickly became popular with the Ultras movement. As the stadium began to predominantly host football matches, the athletics track slowly fell into a state of disrepair, and was eventually built over.

After Spezia earned promotion to Serie C1 following a second place finish, a new prefabricated Curva Piscina was added in 1986. This finally reduced the gap between the stand and the pitch, and by November 1993 the rest of the stadium had been upgraded to make Alberto Picco an intimate footballing arena.

Renovations have slowly occurred since the turn of the millennium, and on 21st August 2007, Stadio Alberto Picco was given a taste of international football when the ground hosted an under 21s match between Italy and France. The Azzurini managed to defeat their prestigious neighbours 2-1 in a satisfying encounter.

Below is a seating plan of Spezia's Stadio Alberto Picco: 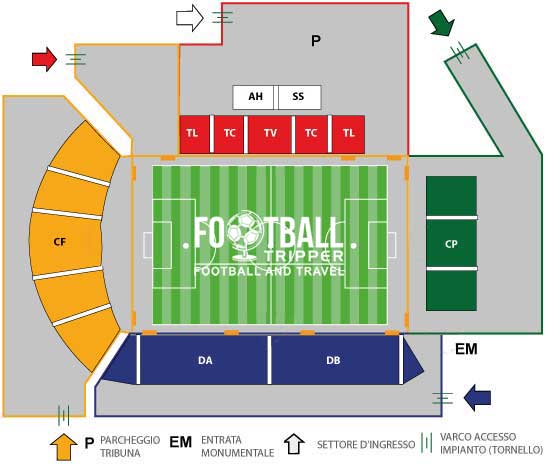