Stadio Olimpico Grande Torino (not to be confused with the stadium in Rome) is a the home of Serie A side Torino, and has previously being used by Juventus whilst they were building their new stadium on the site of the former Stadio delle Alpi between 2006-2011.

Originally named after Benito Mussolini the stadium was built in a year in order to host the Littoriali XI and the World Student Games in 1933. Il Dulce wished to exploit the popularity of sports for nationalist purposes and during his regime oversaw the construction of several communal stadiums in Florence, Rome and Bologna – all of which are still remain in use today.

Envisoned as a multi-purpose sports stadium, the first design was believed to be an ellipsoid, complete with a six-lane athletics track. Despite its origins, the majority of the stadiums use to date has been to host football matches. Starting with the 1934 World Cup, the ground hosted matches of the Coppa Italia, and matches of both Turin based teams until the Stadio Delle Alpi was constructed.

Beginning to show its age, a new stadium was favoured over the Olimpico to host matches of the 1990 World Cup. Intended to succeed The Olimpico as the city’s premier footballing venue, Stadio Delle Alpi proved immensely unpopular as a sports stadium, and Juventus eventually relocated back to their original stadium in 2006 after modernisation for the Winter Olympic Games.

The Olimpico underwent large-scale renovations of its own including a new external facelift, the addition of a new translucent roof, large-scale refurbishment of the seating arrangement and and matchday facilities capable of satisfying UEFA’s 4 star stadium category.

After the conclusion of the XX Winter Games, the running track was replaced by a carpet of synthetic grass. There are some reports that Torino could purchase the stadium outright from the council however the club appear to be content after redeveloping Stadio Filadelfia for youth and reserve matches.

Below is a seating plan of Torino's Stadio Olimpico Grande Torino: 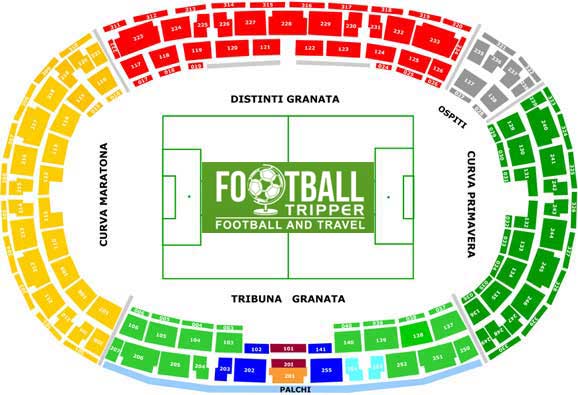 There are four parts to Olimpico di Turin: Curva Maratona (North) for Ultras, Curva Primavera (South) and Distinti Est (East) for families and Tribuna Granata which is the most expensive:

Away fans (Settoe Ospiti) who make the trip to Turin are housed within the south-east corner of the Olimpico between the Distinti Granata to the east and the Curva Primavera to the south. Divided across two-tiers, like a lot of Italian grounds the away section is separated by a layer of fencing on either side which somehow really adds to the atmosphere.

Whilst it would be a stretch to suggest the away fans are caged in or it is in the slightest bit dangerous (it isn’t), the two-tiers can appear quite densely populated from afar and this might be one of the reasons why every visiting team seems to have a real sense of camaraderie on matchdays.

As for the views from the away section, they’re surprisingly good considering that the original Stadio Olimpico di Torino was constructed with a running track around the perimeter of the pitch. This is of course helped by the fact that the roof is fully cantilevered which ensures there are no troublesome support beams.

The Olympic Stadium is much closer to the city centre of Turin than Juventus’ Stadium, and thus combining prematch drinks and getting to the stadium is much easier.

The map below outlines a few of the most popular Sports Bars and Irish Pubs.

There are a number of small food vendors scattered around the stadium, but culturally the Italians tend to eat dinner either at home or at Restaurants compared to the British who might expect to grab a burger at the game.

Similarly, there isn’t the same pub culture with most drinking happening in bars, rather than within the immediate vicinity of the stadium.

Torino FC operate two club shops throughout the city in addition to their own official online store.

The first shop is located along Corso Giovanni Agnelli which is the main road to the left of Stadio Olimpico, and is less than two minutes from the stadium.

You can take a tour of the Stadio Olimpico di Turin every day between 10.00 am – 6.00 pm providing there are no football matches or major sporting events on the day, and there is also a Museum which contains lots of Sporting memorabilia relating to the city.

Prices for the Museum and Stadium Tour:

How to buy Torino Tickets

Ticket to see Torino in action at the Olimpico can be purchased either online, from the two shops listed above and other approved resellers around the city, or from the stadium’s box office in the weeks leading up to the match.


The below prices are merely illustratively and approximately what you will pay for an average match. For big games such as against Juventus in the Derby della Mole then expect to pay a little extra (€5.00 to €20.00).

How to get to Stadio Olimpico Grande Torino

Where is Stadio Olimpico Grande Torino?

Stadio Olimpico di Torino is situated south of Turin city centre in Santa Rita on the Western side of the river Po.

We don’t currently have any parking information, sorry!

The main train station in Turin is Torino Porta Nuova railway station which is the third busiest in Italy in terms of passenger flow. It is 3.7 km away from the stadium which will take you 45 minutes if you plan to walk it or much less time if you take the tram instead.

Aeroporto di Torino known as both The Turin-Caselle and Sandro Pertini Airport after a former president is located 9.2 miles North West of the city centre. It is connected to the city of Turin by Line A of the Metropolitan railway service as well as the SADEM bus shuttle.

There are a number of hotels around the Olimpico with Lingotto Tech, AC Hotel Torino by Marriott and Hotel Cairo being my recommendations based on customer ratings and proximity.

What is the capacity of Stadio Olimpico Grande Torino?

As of 2022 Stadio Olimpico Grande Torino has an official seating capacity of 28,177 for Football matches.

What is the postcode for Stadio Olimpico Grande Torino?

The postcode for Stadio Olimpico Grande Torino is 10134.

Covid Restrictions may be in place when you visit Stadio Olimpico Grande Torino in 2022. Please visit the official website of Torino for full information on changes due to the Coronavirus.