The Mapei Stadium is a multi-use stadium, primarily football in Reggio, Emilia, Italy. The stadium was built in 1995 with a capacity of 20,084 and was given the name “Stadio Città del Tricolore ” in March 2012 for sponsorship reasons, replacing the former name of “Stadio Giglio”.

Constructed in 1995 to replace A.C Reggiana’s ageing Stadio Mirabello which dated back to the early part of the 20th century, Mapei Stadium is one of the most recently built stadiums in Italy. Described as being cast in same mould as English Stadium, the four stands are very close to the pitch and troublesome Athletics Track is done away with which has proven to be very popular with fans.

Originally home to just A.C Reggiana, Sassuolo’s owner Giorgio Squinzi purchased the stadium in December 2012 and now the two teams from the Reggio Emilia region share the facilities at Mapei. Upon opening it was known as Stadio Giglio, but it was given the name Stadio Città del Tricolore on 11th March 2012 which is said to pay tribute to the three colours of the Italian flag.

Currently known as Mapei Stadium after the construction company purchased the naming rights at the start of the 2013/2014 season, along with Juventus Arena and Udine’s Stadio Friuli it is one of three privately owned football stadiums in Italy. Stadium Mapei was actually the first to follow the British and German model, doing so over 20 years ago.

With Sassuolo Calcio being promoted to Serie A for the 2013-2014 season after being crowned Serie B champions, I Neroverdi (The Black and Greens) have ambitious plans for the region’s largest stadium. Not only is it used as a multi-purpose sports facility, it has been transformed in recent years to an shopping and leisure complex which is open all-year round.

Dubbed Project Petals, work began on constructing a new commercial area around Mapei Stadium in November 2004 and although it resulted in a reduction in capacity, the long-term economic benefits for the clubs have so far exceeded any potential ticket sales.

Below is a seating plan of Sassuolo's Mapei Stadium – Città del Tricolore: 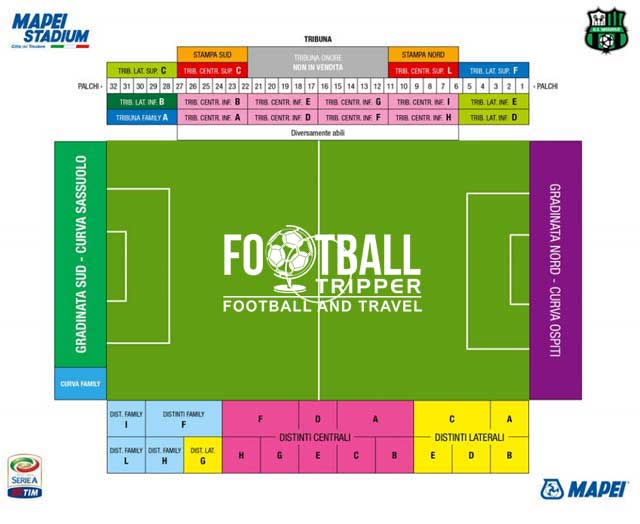 Away fans are usually housed within the northern stand or Curva Nord as it is sometimes referred to. Identical to its opposite number, the Curva Sud, both stands were designed to host 6,037 supporters however their capacities have been reduced since opening. Whilst the Curva Stand now seats 5,000 the away section’s matchday allocation is usually around 4,000 although it very rarely sells out.

Consisting of a relatively steep-tiered single-tiered stand constructed with harsh concrete bleachers rather than individual plastic seats, comfort levels are far from the best and you usually see fans using their jumpers as cushions. This if of course assuming that they don’t need them for warmth or to keep dry due to the lack of roof coverage!

Standard away tickets for the Curva Ospiti were €10.00 but always check with your travelling club first.

Located out of town there aren’t any pubs immediately around the stadium which we are aware of which means you’re probably better off drinking before hand in the center of Reggio Emilia.

You can of course buy a alcohol at the stadium although expect to find it more within a restaurant setting rather than an out and out boozer.

Often around stadiums in Italy there a lack of food options but Città del Tricolore bucks this trend with a nearby recreational and commercial shopping centre serving fans and enhancing the match-day experience. Restaurants include Rossopomodoro and the Old Wild West within the adjacent shopping complex.

Away from the stadium The region of Emilia-Romagna is famed for it’s pasta based dishes such as Garganelli, Strozzapreti and Spoglia Lorda with the key ingredient, balsamic vinegar, being a protected international export.

Like most Football clubs, both teams sell merchandise at the stadium on matchdays but whether or not they are open on other days remains to be seen.

The official online store of Sassuolo suggests that there is a store located here:

Currently there aren’t any tours available of the Mapei Stadium but the adjacent shopping and recreational facilities are open on non-matchdays which allows fans and visitors the chance to see the stadium up close and personal.

To see inside you have to take in a match with it being advisable to get to the Città del Tricolore early, so you can take as much as it in as possible.

How to buy Sassuolo Tickets

Tickets to watch Sassuolo and Reggiana play are available to purchase online and in the usual Italian outlets: Around the City (Tabacchi – Newsagents), and at the stadium box office which is open for up to three hours before kick-off.

Ticket Prices for Sassuolo vary from game to game but generally follow this pattern below. Expect cheaper prices for Reggiana matches as they are in a lower division.

How to get to Mapei Stadium – Città del Tricolore

The Mapei Stadium aka Città del Tricolore is located towards the North East of Reggio Emilia city centre approximately 2.5 kilometres from where the historic city centre lies.

When it comes to Parking, the nearby shopping complex has a lot of spaces with the official websites recommending the following carparks:

Stazione di Reggio Emilia is the main railway station of the area and is located on the famous Milano-Bologna line. It serves 4 million passengers per year with an approximately 165 trains arriving or departing at the station each day.

The closest station to the ground is Reggio Stadio with services departing from the aforementioned main station. Once you have arrived it will take you less than 3 minutes to walk to the ground.

The closest airport is technically Aeroporto di Reggio Emilia, however it doesn’t have any commercial flight services which means Parma International Airport is the closest, at a distance of 50kn away.

A reasonable alternative is to fly into Milan and then catch a fast train to the city centre which should take just under 1 hour.

The closest hotel to Stadio Mapei is the Holiday Inn Express which is located two roads (Viale Felice Romano, Via Meuccio Ruini) along from the Curva Nord with the Ramada Reggio Emilia slightly further away being another decent out of town choice.

For those looking for something central, Hotel Italia and Hotel Cristallo are reasonably priced with Hotel San Marco being the closest to the station.

What is the capacity of Mapei Stadium – Città del Tricolore?

As of 2023 Mapei Stadium – Città del Tricolore has an official seating capacity of 21,525 for Football matches.

What is the postcode for Mapei Stadium – Città del Tricolore?

The postcode for Mapei Stadium – Città del Tricolore is 42122.

Covid Restrictions may be in place when you visit Mapei Stadium – Città del Tricolore in 2023. Please visit the official website of Sassuolo for full information on changes due to the Coronavirus.