Stadio Ennio Tardini named after one of the club’s former presidents (often simply called Il Tardini) is a football stadium based in the city centre based, home to Serie A side Parma F.C. The ground is the sixth oldest in Italy and was last renovated between 1990-1993.

Parma’s stadium dates back to the 1920s when the club in conjunction with the local council sought to construct a new Stadio Municipale. Spearheaded by Parma F.C President and Italian Lawyer Ennio Tardini, the club launched a national competition for the design of the new stadium in February 1922 offering up a prize of ?10,000 to whoever came up with the winning idea.

Architect Ettore Leoni’s French and German inspired design which was said to borrow most of all from Lyon’s Stade de Gerland was eventually chosen, with construction work on Parma’s new stadium beginning on 26th December 1922. Sadly Ennio Tardini died a month before the stadium was completed in September 1923, and thus Stadio Municipale was renamed in honour of the ground’s catalyst.

Stadio Ennio Tardini underwent slight renovations throughout the 20th century including the addition of an Athletics track in 1935 and its removal once again in the 1980s. The capacity peaked at around 13,500 until Parma were promoted to Serie A in 1990 which at the time required all stadiums in the league to have a minimum capacity of 30,000, and subsequently the majority of stands were rebuilt.

Bankrolled by Italian multi-national company Parmalat in the 1990s until it went bankrupt in 2003, Parma had the necessary funds to rebuild the north, south and main stands, with the club’s owners even exploring the feasibility of constructing a brand new stadium in Baganzola outside of Parma. When Parmalat encountered excessive red tape they instead decided to renovate and the fill the corners to maximise the limited space.

Below is a seating plan of Parma's Stadio Ennio Tardini: 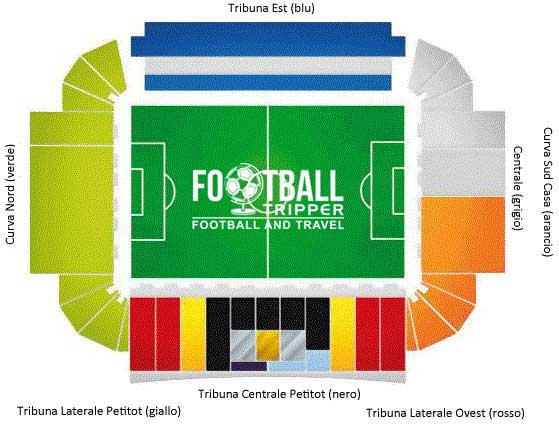 Away supporters making the trip to Parma’s stadium are housed within the Curva Sud (Settore Ospiti) with the standard allocation of tickets said to be set at 2,500 per match. Traditionally this section of the ground was shared with the home supporters, however since the accidental death of a Vicenza fan in 2009 who fell from the back of the stand, it has been used to solely house the visiting fans.

Although Parma F.C were cleared of any wrongdoing, the club have continued to renovate sections of the ground with €830,000 spent in the Summer of 2010 to improve safety above and beyond current guidelines. Visiting supporters are now generally located within the large central block between the two corners which means views of the pitch are decent, with close proximity to the pitch and unrestricted views throughout.

Located just outside the city centre which is located on the banks of the river Parma, you can easily grab a few pints in the city centre before making your way to the stadium in time for kick-off. The nearby University of Parma helps to set the demand for bars and there’s a reasonable number scatted around the local area just waiting to be discovered.

There isn’t much happening at the stadium food and drink wise with the immediate environs being residential in nature. This means if you want a pre or postmatch dining experience of Parma Ham and Parmesan Cheese, you’re better off looking around Parma’s historic city centre or even your hotel’s restaurant – assuming it has one.

There is an official Parma Emporium inside Tribuna Petitot just as you enter the main piazza of the ground which sells a massive range of Official FC Parma merchandise. Originally designed as a meeting place for the whole spectrum of I Gialloblù (The yellow and blues) fans, it has since transformed into a mini museum of sorts with memorabilia from the clubs history tastefully displayed to the general public.

For more information about opening times or anything else feel free to phone the store on  +39 0521.505212 or send an email to  [email protected]

With the club having relocated their main offices and administrative function to the Centro Sportivo di Collecchio on the 16th December 2011 and the fact that Italian stadiums aren’t on the same commercial level as their English counterparts, fans will be disappointed to know that there is no official tour available for the Ennio Tardini.

This may however change in the future with rumours of a €200 million reconstruction project which would see the ground encompass a shopping centre, car park, cinema and gym facilities just like Sassuolo’s Mapei Stadium. If they’re offering these commercial activities, then I can’t see why they wouldn’t incorporate something football related such as a tour.

How to buy Parma Tickets

Tickets to see Parma in action can be purchased via the expected channels such as online, at the stadium’s club shop in the weeks leading up to the match and from the many Tobacconists/Newsagents throughout the city.

Note: For high-profile matches which English fans might call “Category A” games there is usually a €10.00 euro price increase to offset the extra demand, with tickets starting at €25.00 and going anywhere up to €150.00 for the best seats in the house.

How to get to Stadio Ennio Tardini

Where is Stadio Ennio Tardini?

The Ennio Tardini stadium is less than 1 kilometre away from Via Nazario Sauro which is essentially the city centre. The city’s infrastructure was praised during Italy’s failed Euro 2016 bid which means matchday travel should be easy enough.

The majority of drivers will be arriving from the A1 motorway Autostrada del sole (The longest in Italy…) which runs down the spine of Italy, connecting Milan with Naples via Bologna, Florence and Rome. Take the exit to Parma and proceed to follow signs to the city’s ring road, Tangenziale, and exit at the Via Mantova road, following signs for the Stadium.

There isn’t any parking available at the stadium to the general public on matchdays which means you can either get there early and contend with street parking or find a parking garage in the city centre.

The railway train station of the city is Stazione di Parma which forms part of the Milan-Bologna railway with 4 tracks in total. Unfortunately there are no connecting trains or indeed train-stations near Ennio Tardini which means you will either have to walk  to ground or catch a bus.

The walk from the station to the stadium will take you 30 minutes but is pleasant enough as Parma like a lot of Italian city’s is full of character and history on ever street.

Aeroporti di Parma known as Parma “Giuseppe Verdi” Airport is located in the Emilia Romagna region of Italy, halfway between Bologna/Milan and only 1.5 miles Northwest of the city centre. The airport lacks its own train station meaning that you will either have to get a taxi or bus to get to the stadium/city.

The main bus is No 6 which costs €1.20 euros with an additional 80 cents fee if you purchase the ticket on the bus rather than from a vendor before boarding.

Who plays at Stadio Ennio Tardini?

What is the capacity of Stadio Ennio Tardini?

As of 2023 Stadio Ennio Tardini has an official seating capacity of 27,906 for Football matches.

When was Stadio Ennio Tardini opened?

What is the postcode for Stadio Ennio Tardini?

The postcode for Stadio Ennio Tardini is 43123.

Covid Restrictions may be in place when you visit Stadio Ennio Tardini in 2023. Please visit the official website of Parma for full information on changes due to the Coronavirus.