Stadio Mario Rigamonti is a football stadium located in the Lombardy city of Brescia which is in Northern Italy. Home to two football sides, FeralpiSalò and the much larger Brescia Calcio, the 1959 built stadium has a capacity of 16,308.

The site on which today’s Stadio Mario Rigamonti sits has been used to host football matches since at least 1928 when the council built its first stadium. The original ground was demolished and replaced by newer facilities which opened on 19th September 1959. Designed Tommasietti architects, construction work began on 30th April 1956, and lasted around three years in total.

The first stadium was known as Stadio di Viale Piave however after it was rebuilt, it was renamed in honour of Mario Rigamonti who tragically died in the Superga Air Tragedy. Born locally, Mario played for Brescia Calcio before transferring to Torino at the age of 19, where he subsequently won four consecutive Serie A title as part of the legendary Grand Torino side.

When Brescia earned promotion to Serie A after finishing third behind Lecce and Cesena in the 2009/2010 season, Stadio Mario Rigamonti underwent renovation work in order satisfy the league’s minimum capacity requirement of 20,000. Safety inspections on the new sections of seating were carried out later than expected and thus the capacity was reduced to only 16,308 for the first three games of the season.

At the start of the 2012 season the Curva Nord was rebuilt in order to reduce the distance between the stand and the pitch. It was inaugurated on 27th October with a match against Pro Vercelli. That season Stadio Rigamonti was also chosen a neutral venue to host a match between Genoa and Cagliari, after the Luigi Ferraris stadium was closed following crowd trouble against Siena.

Stadio Mario Rigamonti hosted its first international match on 4th June 1988 when Italy took on Wales. The only goal of the match was scored by Juventus’ Ian Rush who had recently signed from Liverpool. A rugby match between Italy and Tonga on 10th November 2012 was also held at Mario Rigamonti, attracting an estimated 18,000 fans.

Below is a seating plan of Brescia's Stadio Mario Rigamonti: 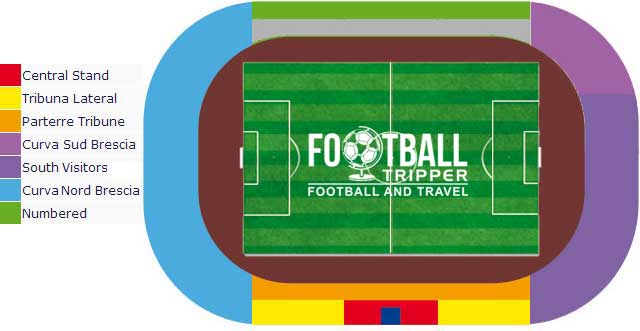 How to get to Stadio Mario Rigamonti

Where is Stadio Mario Rigamonti?

Who plays at Stadio Mario Rigamonti?

What is the capacity of Stadio Mario Rigamonti?

As of 2023 Stadio Mario Rigamonti has an official seating capacity of 16,308 for Football matches.

When was Stadio Mario Rigamonti opened?

Covid Restrictions may be in place when you visit Stadio Mario Rigamonti in 2023. Please visit the official website of Brescia for full information on changes due to the Coronavirus.