Stadio Renato Curi is a football stadium located in the capital city of Umbria, Perugia, which is in central Italy. Home to A.C. Perugia Calcio since opening in 1975, the 28,000 capacity ground is named after footballer Renato Curi who died whilst playing for Perugia against Juventus in 1977.

Designed by architect Luigi Corradi who also lent a hand to Napoli’s San Paolo, Perugia’s stadium first opened in 1975 when it was known as Stadio Pian di Massiano. Through use of prefabricated materials, the stadium was essentially complete in just over four months, beginning in May 15th and finishing in October 5th. It should however be noted that originally the stadium only consisted of three stands which helped speed things up.

It wasn’t until Perugia earned qualification for the UEFA Cup during the 1978/1979 season that a matching Curva was added to the south stand. It was inaugurated on 7th November 1979 when the club took on Aris Thessaloniki F.C. The stadium was renamed to Stadio Renato Curi two years after opening when the Perugia player died of a heart attack on the pitch on 30th October 1977 in a match against Juventus.

Renovations in the last three decades have been predominantly about modernising the facilities, rather than rebuilding the existing structures. One such example was the addition of plastic coloured seating to spell out AC Perugia which was added, as well as the removal of perimeter fencing at the request of UEFA.

Since the 1980s, the stadium has hosted six matches of the Italian national team, and during the 1989/1990 season A.C Perugia ground-shared the stadium with Fiorentina after Stadio Artemio Franchi was being prepared for the 1990 World Cup. During this season, Stadio Renato Curi ended up hosting a semi-final match of the UEFA Cup against Werder Bremen in what has probably been the highest-profile game held at the ground to date.

In 2003 an agreement was signed with the municipality of Perugia to lease the stadium for the next 80 years with the football club pledging to invest in further expansion and renovation work. However, future remodelling has since been cast into doubt after Perugia were declared bankrupt in 2005.

Below is a seating plan of Perugia's Stadio Renato Curi: 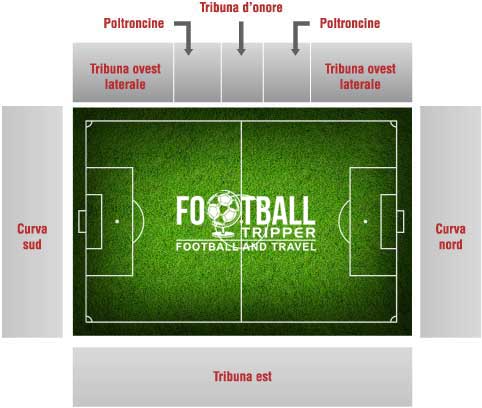 How to get to Stadio Renato Curi

Where is Stadio Renato Curi?

Who plays at Stadio Renato Curi?

What is the capacity of Stadio Renato Curi?

As of 2023 Stadio Renato Curi has an official seating capacity of 28,000 for Football matches.

When was Stadio Renato Curi opened?

Covid Restrictions may be in place when you visit Stadio Renato Curi in 2023. Please visit the official website of Perugia for full information on changes due to the Coronavirus.