The Stadio Olimpico in Rome is located within the Foro Italico sports complex and is home to both Serie A teams Roma and Lazio.

The stadium is famous for the having a running track around the perimeter of the pitch, even though the ground is primarily used for Football and Rugby union events.

The original iteration of Stadio Olimpico dates back to the period just before the Second World War when the Olympic Stadium then known as Stadio dei Cipressi was constructed as the heart of an upcoming sports complex. Known as The Mussolini Forum which first opened in 1937, its name is obviously derived Il Duce who was one of the infamous founding fathers of fascism.

Renamed as Foro Italico after the war had ended, the stadium was finally completed in the post-war period and peaked with a capacity of 100,000 in 1953. Reopened with a friendly match between Italy and Hungary, the capacity shrunk after the stands were converted to all-seating for the 1960 Summer Olympics.

Building on the success of this, Stadio Olimpico became even more prominent in the eyes of sports fans across the world when it was chosen to host matches of the 1990 World Cup including the final. With the exception of Tribuna Tevere which was expanded, Rome’s stadium was completely rebuilt from the ground up resulting in its current form.

Since Italia 90 it has been classified as a UEFA Elite Stadium which means it is capable of hosting the biggest football matches in the continent, and to date it has two Champions League finals. The first one in 1996 featured Italian side Juventus against Ajax, and the second one was held 13 years later in 2009 when Barcelona battled with Manchester United.

Most recently renovated between 2007-2008 in preparation for the most recent Champions League final, The Stadio Olimpico has been one of the enduring success stories of the the 1990 World Cup. It has now been selected as one of the thirteen venues for Euro 2020 which is set to be held across the continent.

As far back as 2005 Lazio President Claudio Lotito talked about a new stadium project dubbed Stadio Delle Aquile, however since then there has been very little development.

AS Roma have their own Stadio Della Roma project which has also been the source of much frustration for fans of the club. Set to be located in the southwest of the city within the Tor di valle district on the site of the current racecourse, the entire project has been fraught with delays and difficulties.

The project inspired by the coliseum launched in 2014, was approved in 2017 and then delayed/halted in February 2021.

Based on the bureaucracy of the local government and the fact that Rome is an area of intense archaeological interest with significant history potentially beneath every piece of land, don’t expect either club to move away from the Stadio Olimpico any time soon.

Below is a seating plan of AS Roma & SS Lazio's Stadio Olimpico Rome: 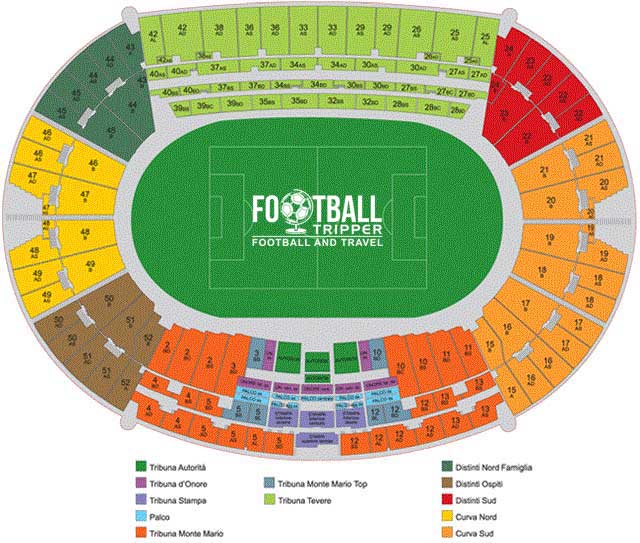 The Olimpico is one continuous ring but could be divided into the following four sections: Curva Nord, Tribuna Tevere, Curva Sud and Tribuna Ovest.

Away fans are housed in one of the the distinti sections (The corner) opposite the home curva although they can inhabit more of the stand depending on levels of demand for tickets. For example when Roma play their fans occupy the Curva Sud therefore the away fans will be housed in the corner between the Curva Nord and either of the grandstands. For Lazio the opposite is true.

When it comes to hosting the annual Coppa Italia final the stadium is usually split 50:50 with both finalists receiving a goal-end, similar to how the English FA divides Wembley for domestic matches.

Although there’s a congregation of pubs and restaurants located across Ponte Milvio which is the next bridge along after the one which takes you to the ground you’re probably much better off drinking in the city centre whether you are an away fan or simply a football tripper.

With a slight bias towards Irish Pubs and Sportsbar the above map features half a dozen highly rated suggestions you might want to keep as back ups just in case you can’t find anything.

Personally we think Flann O’Brien’s and Shamrock Irish Pub are both decent choices as they are close to the metro lines which means you won’t have to walk as far when eventually heading to the ground.

Like most Italian stadiums the ground doesn’t offer much in the way of catering beyond a token offering of fries and a few other matchday staples. The city centre has an abundance of fast-food franchises such as McDonalds if you want something quick otherwise explore the city and choose a restaurant.

It’s really hard to go wrong when it comes to the cuisine in Rome, and one of the great things about the city is that a lot of them are open later after the match. This is obviously great for your tactical debriefs and player ratings!

Neither club operate a permanent club shop at the Olimpico due to licensing however you will be able to purchase merchandise both official and unofficial outside the stadium on matchdays from the many stalls and kiosks scattered around the stadium.

We’ve added the two largest stores to the map but for a complete list of each club’s store locations throughout the city visit this page for Lazio, and this page for Roma.

Sadly neither the two Rome based clubs or the stadium’s operators offer guided tours of Stadio Olimpico. If you really want to appreciate it in all its glory you should get to the ground early and have a walk around the perimeter.

How to buy AS Roma & SS Lazio Tickets

Tickets to see both Lazio and Roma play at home can be purchased online, at the stadium box office, or from any of the numerous sellers located around the city including the club shops.


For further information you can also visit the club’s respective websites as outlined in the “further reading section” at the top of the page.

How to get to Stadio Olimpico Rome

Where is Stadio Olimpico Rome?

Italy’s national stadium is located within the Foro Italico Sports Complex which is located approximately 6km north-west of what is widely regarded as Rome city centre.

As the country’s capital city and place where supposedly all roads lead to, Rome has excellent road infrastructure, however it also has world-class levels of congestion which should certainly make you think twice about driving.

For an out of town stadium the number of car parking spaces appears to be pretty inadequate with both clubs neglecting to mention what the deal is regarding on site parking and whether or not there is indeed an official car park.

Thankfully the majority of people who will be reading this will be travelling via plane and then public transport!

The two main stations in Rome are Roma Termini which is the largest in the city, and Roma Tiburtina which has emerged in recent years as a hub for high-speed rail services across Italy.

Stazione di Roma Termini has international services to European cities such as Paris, Munich and Geneva, with the 29 platforms serving over 150 million passengers a year. Although many associate Roma Tiburtina more with InterCity and commuter services across the Lazio region, both stations actually serve similar routes.

Most cheap flight providers tend to use Fiumuncino as their hub and although its closer to the city centre, the drawback is that there are no train connections which means you have to take a coach or taxi.

There are a few hotels located close to Stadio Olimpico but with the city’s vast array of culture and heritage back within the centre it would be pretty foolish to not book something further south.

There are lots of affordable hotels located near to the main train stations and due to the vast amount of tourists there’s usually lots of competition based on price which is good news for us Football Trippers.

Who plays at Stadio Olimpico Rome?

What is the capacity of Stadio Olimpico Rome?

As of 2023 Stadio Olimpico Rome has an official seating capacity of 73,261 for Football matches.

When was Stadio Olimpico Rome opened?

What is the postcode for Stadio Olimpico Rome?

The postcode for Stadio Olimpico Rome is 00135.

Covid Restrictions may be in place when you visit Stadio Olimpico Rome in 2023. Please visit the official website of AS Roma & SS Lazio for full information on changes due to the Coronavirus.