Amsterdam Arena stylised as the Amsterdam ArenA is the home stadium of famous Dutch club, Amsterdamsche Football Club Ajax. Constructed over a two year period at an estimated cost of €140 million, the 53,052 capacity ground opened in 1996 and is famous for having a retractable roof.

Amsterdam Arena was first opened on the 14th August 1996 with a friendly match held between Ajax and European rivals A.C Milan after a construction period of three years. Costing approximately €140 million Ajax’s stadium had its genesis in the city’s bid to host the 1992 Summer Olympics with the original designs of the ground featuring an athletics track. After Amsterdam lost the bid to Barcelona in 1986 plans were shelved until the early 1990s.

With Ajax having to host its more important matches at the Olympisch Stadion, there was a growing realisation that the current De Meer Stadion with its capacity of 19,000 was too small for a club of Ajax’s size. Working in conjunction with Government of Amsterdam, Ajax redesigned the stadium to include a retractable roof, improved public transport infrastructure and no athletics track. The revamped design was green-lighted almost immediately in 1992, with construction beginning the following year.

Designed by architect Rob Schuurman, the 53,052 capacity ground was designated to host the 1998 Champions League final with Real Madrid defeating Juventus by a single goal to nil. Seen as a dry run to the Euro 2000s, the Amsterdam Arena proceeded to host five matches during the tournament including three group games, one quarter final and one semi which featured Netherlands.

Today, the Amsterdam arena continues to be recognized as one of the premier football stadiums in the world, with UEFA designating the stadium as a five star stadium. Hosting numerous pop concerts including One Direction and The Rolling Stones, the last major match to be held at the ground was a final between Benfica and Chelsea F.C for the 2013 Europa League title, with the English side triumphing on this occasion.

Below is a seating plan of Ajax's Johan Cruyff ArenA: 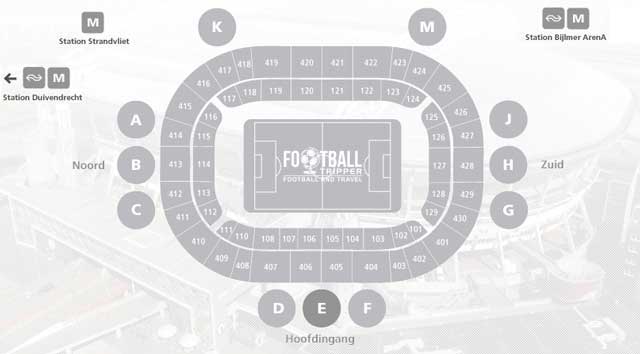 Away fans are housed within the sections 416 and 417 of the north stand which is accessible through gate K in the north-east corner.

Ajax operate a large 642m² fan shop at the stadium in addition to their official online store. Located next to the main entrance of the stadium, there are over 300 different pieces of merchandise to choose from and the store is guaranteed to be open on match days, and even for 30 minutes after the full time whistle.

Please nte that the opening times listed above are for the Summer period (1st May to 31st August) and that Winter (1st September to 30th April) has slightly different times.

With the exception of match days, tours usually run eight times a day, and typically last around 60 minutes. Available in both Dutch and English, there is usually no need to make reservations with the first tour of the day beginning at 10.30 am and the last departing at 4.30 pm.

For more information, to find a complete tour schedule and to book your tickets please visit this Amsterdam Arena Tour Page.

How to get to Johan Cruyff ArenA

Where is Johan Cruyff ArenA?

Amsterdam Arena is located in the Bijlmer-Centrum district of Amsterdam which is located approximately 8km south-east of what many would regard as the city centre.

From the A2 (Utrecht – Amsterdam) take exit S211 (Ouderkerk a/d Amstel/Duivendrecht/Diemen) and proceed to follow the signs for Amsterdam Zuidoost/Transferium which will take you south-east.

The Address for satnav is as follows:

At the Arena there are seven official car parking areas which have room for over 9,000 cars and 170 buses. The closest car park known as P-1 is the most expensive at a price of 14 euros, whereas car parks P2 to P10 cost 7 euros.

They are all within walking distance of the stadium, and tickets can either be purchased on the day or in advanced via the TicketBox Sales Outlets around the city.

Amsterdam Centraal Railway Station is located approximately 8.9km north of Amserdam Arena which means it will take the average person 2 hours or so to walk. Therefore it is recommended that you take some form of public transport such as the Metro as outlined below.

From the Centraal Railway Station you can catch Metroline 54 to the Strandvliet/ArenA in just under 15 minutes. This will leave you with a walk of around 5 minutes to the ground.

The nearest airport is Amsterdam Schiphol which is located 15km south-west of the city. There are over 15 flights to England a day, and is popular with low-cost airline carriers such as Transavia, Jet2 and Easyjet who fly out of Luton.

As the stadium is located within a shopping and entertainment complex there are a few hotels within a five minute walk of the Arena such as Hampton by Hilton, and the Holiday Inn Express. Whilst they’re both quite reasonably priced, there’s much better options further north back towards where the night-life is!

Who plays at Johan Cruyff ArenA?

What is the capacity of Johan Cruyff ArenA?

As of 2023 Johan Cruyff ArenA has an official seating capacity of 53,052 for Football matches.

When was Johan Cruyff ArenA opened?

What is the postcode for Johan Cruyff ArenA?

The postcode for Johan Cruyff ArenA is 1101 AX.

Covid Restrictions may be in place when you visit Johan Cruyff ArenA in 2023. Please visit the official website of Ajax for full information on changes due to the Coronavirus.