De Grolsch Veste or The Grolsch Fortress in English, is a purpose built football stadium located in the Business & Science Park next to the University of Twente. Home to FC Twente since opening in 1998, the ground was expanded 10 years later in 2008 to give it its current capacity of 30,206.

Before moving into De Grolsch Veste FC Twente had previously played their home matches at Diekman Stadion which was constructed in the 1950s. With a maximum capacity of 13,500 the stadium was demolished in 1998 after the completion of the Arke Stadion although at first the club has considered expanding the ageing stadium.

The larger capacity 30,206 stadium anticipated the growing fanbase FC Twente were receiving, and at an initial cost of around 33 million Dutch guilders (15 million euros) the stadium has proven to be a shrewd investment, particularly at a time when stadium legislation across Europe was encouraging football stadiums to become all-seaters.

The first game at the new stadium was held against PSV Eindhoven on the 10th May 1998 in a Eredivisie match which saw the home side christen the new stadium with a comprehensive 3-nil victory. Less than a decade after opening the club decided to expand Arke Stadion with the ground upgraded to the current capacity of around 30,000 seats across two-stages which took place between 2008 and 2011.

Not included as a host venue in Euro 2000 which was co-hosted with Belgium, there are tentative plans to expand the stadium to around 44,000 capacity should the Netherlands ever host a FIFA World Cup although there’s suggestions from Twente that these could go ahead regardless, as the City of Enschede have already sequentially approved plans back in 2009 with a CGI mock-up doing the rounds amongst supporters.

The stadium became known as De Grolsch Veste in May 2008 after the locally based brewery purchased the naming rights. Based within the town of Enschede where Twente are from, The Grolsch Fortress name references the former fortified town of Groenlo which was the beer is said to have first been brewed.

Below is a seating plan of Twente's De Grolsch Veste: 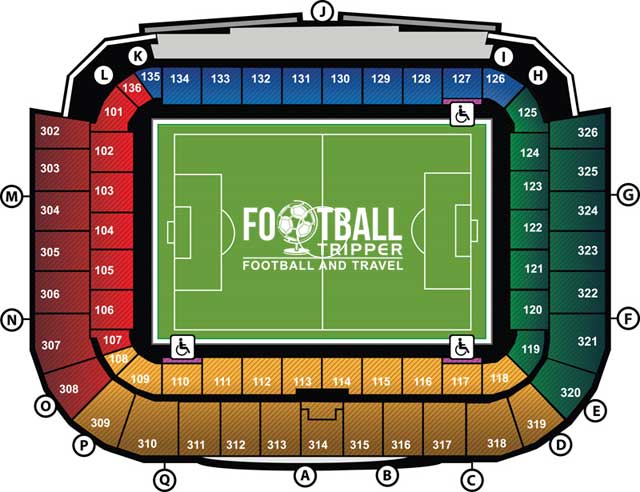 It appears as if away fans are housed within sections 325 and 326 within the easternmost part of the south stand. Situated in the upper-tier, views of the action on the pitch are superb and as you’d expect from a modern stadium.

FC Twente operate a club shop at De Grolsch Veste in addition to their own online store which allows you to browse the full range of merchandise from the convenience of your own home.

There are variety of tour packages available for FC Twente’s stadium although the most popular is the “Walk Tour” which last for approximately 90 minutes and takes place during the school holidays.

Costing €10.00 per person, you can find out full information of the “Walk Tour” and the other options available by visiting this page on the official website. You can also book your tour by following the link.

How to buy Twente Tickets

Tickets to see FC Twente in action at their beer fortress can either be purchased from the FANstore in the days leading up to the match or online from the official website.

Prices vary depending on who the opposition is and whereabouts you sit however generally speaking you’re looking at around €22.50 for a place in the lower tier behind the goal, and around €30.00 – €35.00 for a seat within the two grandstands.

Expect to pay a premium of up to €10.00 or so when the big three clubs (Ajax, Feyenoord and PSV) come to town.

How to get to De Grolsch Veste

Where is De Grolsch Veste?

FC Twente’s stadium sits adjacent to the university campus some 4.8 km north-west of Enschede city centre. Not practical to walk, most fans either drive to the stadium or instead catch the overground train service to Enschede Drienerlo station.

Whilst there are 1,000 parking spaces at the stadium itself, they are usually reserved for guests of the club and thus parking at the University of Twente is instead encouraged.

From here you can then catch a free shuttle bus service which runs for two hours before and after the match.

De Grolsch Veste is served by its own railway station known as Enschede Drienerlo which is located right outside the stadium.

Trains frequently depart on matchdays from the Enschede station in the city centre with the journey taking no more than five minutes on average.

The three closest airports to the city of Enschede are all technically in Germany: Munster (85 km), Dortmund (121 km), and Dusseldorf (137 km).

Within the Netherlands the closest airport is in Groningen Airport at 140 km away, with Amsterdam International located 174 km to the west. Your best option depends entirely on a) where you’re travelling from, and b) your preferred method of travel i.e rental car or train!

The closest hotel to De Grolsch Veste is the Hampshire Hotel which sits within the Business and Science Park. Slightly further away across the main road there are two hotels within the University of Twente’s campus: Hotel de Graaff and Conferentiehotel Drienerburght.

Back within the city centre there are of course plenty of other options including a well priced InterCityHotel and Bed & Breakfast Ensche-Day Inn which are both located next to the station.

Who plays at De Grolsch Veste?

What is the capacity of De Grolsch Veste?

As of 2023 De Grolsch Veste has an official seating capacity of 30,206 for Football matches.

When was De Grolsch Veste opened?

Covid Restrictions may be in place when you visit De Grolsch Veste in 2023. Please visit the official website of Twente for full information on changes due to the Coronavirus.