Stadion Feijenoord more commonly referred to by its nickname of De Kuip (The Tub in English), is a purpose built football stadium located in the famous Dutch city of Rotterdam. Home to popular team Feyenoord, the 51,117 capacity ground first opened in 1937.

Since opening back in 1937 Stadion Feijenoord has established itself as one of Europe’s premier stadiums with the 51,117 capacity ground hosting a record of 10 finals across various UEFA competitions. Most famously, the 2002 UEFA Cup final which saw Feyenoord defeat German giants Borussia Dortmund 3-2 in their own back yard and France’s victory against Italy after extra time in the Euro 2000 final.

Co-financed by billionaire Daniël George van Beuningen, Stadion Feyenoord is said to come about after the club’s president, Leen van Zandvliet, was dissatisfied with contemporary football stadiums in Europe at the time. Citing Arsenal’s Highbury as the antitheses of his beliefs at the time due to it’s support beams,  he insisted that Stadion Feijenoord was constructed with “free hanging tiers”.

Testament to the president’s vision, Barcelona’s 1957 built Nou Camp featured similar designed stands and in 1991 De Kuip was regarded as one of Rotterdam’s unique historical monuments.

The major renovation which occurred three years later giving the ground its current appearance was carried out with consideration the stadium’s heritage. The two most notable features of the work were a conversion to all-seater stand and a roof with complete coverage.

Since 2006 Feyenoord working in conjunction with the city of Rotterdam have began formulating plans to improve the ground. Currently it appears as if both parties prefer renovation with speculation rife that building work will begin in the Summer of 2015 resulting in a 70,000 capacity “De Nieuwe Kuip” after three years, with an expected cost of €200 million.

Below is a seating plan of Feyenoord's Stadion Feyenoord: 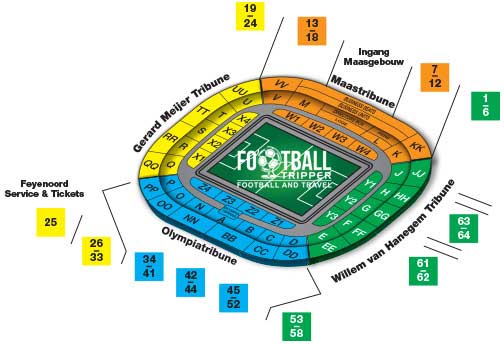 Away fans are usually housed centrally within the south stand’s highest tier with section GG right at the top the most common place for visitors to sit and watch the match.

Feyenoord operate four club shops throughout the city of Rotterdam in addition to their own online store. The largest and most popular store is of course the fanshop at the stadium.

Stadium tours of the iconic De Kuip Stadion can be booked by visiting this page on the official website. As the players train at the stadium each day it’s hard to predict which areas of the ground are off limits, however generally speaking the 90 minute tour is fairly comprehensive!

How to get to Stadion Feyenoord

Where is Stadion Feyenoord?

De Kuip sits 5 or so kilometres away from Rotterdam city centre within the Feijenoord district towards the south of the city. With walking impractical for most Football Trippers, fans instead choose to take advantage of the city’s array of excellent public transport options.

There are a total of 8 on site car parks located within the immediate environs of the stadium which belong to the operators of the De Kuip.

With at least half of these reserved for season ticket holders and guests of the club, there’s much less spaces available than you think so get there early!

Rotterdam Centraal railway station is the main train station of the city and is located within a prime urban location. With the exception of the tram outlined below there isn’t really a suitable overground service to the stadium with Rotterdam Zuid 1.8 km north technically the closest train station.

The nearest international airport is called  “Rotterdam The Hague” and it sits less than 11 km north east of Feyenoord’s stadium, and 6 km or so from the centre of Rotterdam.

The third largest airport in Netherlands by number of passengers served, upon landing you can catch shuttle bus 33 to the RandstadRail Metro Line E which will take you to the central railway station.

As there’s a distinct lack of hotels immediately around De Kuip and indeed around the Feijenoord district, you’re much better off heading back north across New Meuse river towards Rotterdam Centre.

Here you will find familiar international options such as the Holiday Inn, Hampshire Hotel, Hotel Ibis and the well priced easyHotel from the same company which specialises in cheap flights.

Who plays at Stadion Feyenoord?

Dutch side Feyenoord play their home matches at Stadion Feyenoord.

What is the capacity of Stadion Feyenoord?

As of 2023 Stadion Feyenoord has an official seating capacity of 51,117 for Football matches.

When was Stadion Feyenoord opened?

Stadion Feyenoord officially opened in 1937 and is home to Feyenoord

What is the postcode for Stadion Feyenoord?

The postcode for Stadion Feyenoord is 3077 AA.

Covid Restrictions may be in place when you visit Stadion Feyenoord in 2023. Please visit the official website of Feyenoord for full information on changes due to the Coronavirus.