Philips Stadion is a purpose built football stadium located in the municipality and city of Eindhoven.

Home to famous Dutch team, PSV Eindhoven, the 35,000 capacity arena dates back to 1910 but has undergone significant renovations over the years to reach its current form, with the 2002 filling of the corners the last major structural improvement made.

PSV have played football at the location of the Philips Stadion as far back as 1913 when the stadium was referred to as Philips Sportpark.

Situated within the Strijp area of Eindhoven, the stadion is located within the Philipsdorp neighbourhood which was created by Anton Philips in 1910 to be used as accommodation for workers of his company. PSV football club was then established three years as another gift to employees.

By 1916 the football pitch had its first wooden stand capable of accommodating over 550 views, and by the 1930s the capacity doubled as a new 900 seater stand was also erected.

Damaged during the second world war, the previously added athletics track was removed in 1958, with the Philips Stadion really coming to its own with the installation of floodlights which were inaugurated with a match against Belgian side Anderlecht.

PSV’s ground underwent two extensive renovations in the late 1980s and early 1990s in order to give the stadium its form today with the brand new two tiered main stand baptised with a friendly match against dominate Italian side A.C Milan in 1988.

In preparation for Euro 2000 where PSV’s stadium was scheduled to host three group matches, the remaining older stands were elevated as to create uniformity in the ground’s appearance.

The most recent significant renovation occurred during the 2000-2001 season when the four corners of the stadium were filled in, giving Philips Stadion it’s current capacity of 36,000.

Not quite large enough to host a Champions League final, UEFA designated PSV’s ground as a four star stadium and in 2006 it hosted the UEFA Cup final between Middlesbrough and Sevilla with the Spanish side winning 4 nil.

Below is a seating plan of PSV's Philips Stadion: 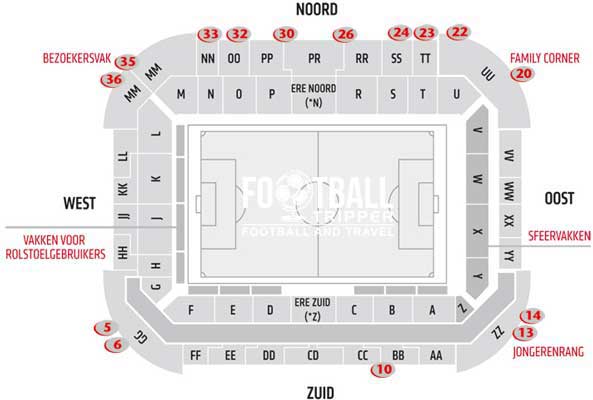 Travelling supporters are usually housed within the second-tier of the northernmost corner of the stadium which some may refer to as being in the north-west.

As shown by the seating plan above the “bezoekersvak”, literally visiting stands, are comprised of sections 35 and 35.

On some occasions travelling supporters may be able to access the stadium from “Eindhoven Stadion” railway station which is a special matchday stop for away fans.

Designed for trains travelling on the Eindhoven-Beukenlaan line, travelling fans can access the away section in the northern corner via a special footbridge.

PSV operate a Fanstore located at Philips Stadion which features an extensive range of official merchandise in addition their online store which is also known as PSV Fan Store.

Tours of PSV Eindhoven’s legendary Philips Stadion last for 60 minutes and usually run twice a day at 1.00 pm and 2.30 pm everyday of the week with the exception of Sundays and when there is a home match on.

Each ticket includes entry to the museum (€7.50 itself),  souvenir and a voucher for a free drink at Caffee 1913.

For more information or to book your place on the stadium you can either visit this page, send an email to [email protected] or phone the club on 040 2 505 505, option 5. As far we we know you can’t just turn up on the day!

How to buy PSV Tickets

For foreign visitors looking to take in a PSV match the club advise you to purchase one of their special match packages which consist of a ticket, small gift and a 10 euros voucher to spend inside the concourse on refreshments.

The club officially state that a PSV Club Card is a mandatory requirement when purchasing ticket, however there is conflicting reports as to whether this is very rigorously enforced.

Introduced across the Netherlands around a decade ago, it was aimed to reduce hooliganism through accountability but whether or not it has been a success is a debate for another day!

An easy option is to perhaps purchase online from ViaGoGo who usually have a decent number of tickets.

How to get to Philips Stadion

Where is Philips Stadion?

Philips Stadion is located so close to the city centre that the text from Google maps which says “Eindhoven” literally runs over the ground’s pitch.

You can walk from both the main train station and commercial areas within 5 minutes flat.

Through PSV you can purchase a parking permit either with or without your ticket to use at one of the official spaces at the ground.

By default fans are given tickets at Garage P1 which is sits north-west of the stadium just off of Mathildelaan/PSV-Laan, 5616 LA Eindhoven.

The city’s main railway station which dates back to 1866 is known as Eindhoven and it forms the part of three railway lines which connect the city to Breda, Venlo and Weert. The journey from here is less than 900 metres.

Eindhoven Airport is the second largest airport in Netherlands, and it sits 7.5 km west of the city centre, making it conveniently located for football trippers everywhere across Europe.

Upon landing you can catch the 401 bus which will take you past Philips Stadion and to the main train station within 20 minutes.

As we’ve mentioned several times now, PSV’s stadium is located right within the heart of Eindhoven city centre. This means fans have a variety of choices within a 10-15 minute walking distance such as the Holiday Inn, Queen Hotel and the Park Plaza.

Who plays at Philips Stadion?

Dutch side PSV play their home matches at Philips Stadion.

What is the capacity of Philips Stadion?

As of 2023 Philips Stadion has an official seating capacity of 35,000 for Football matches.

When was Philips Stadion opened?

Philips Stadion officially opened in 1910 and is home to PSV

What is the postcode for Philips Stadion?

The postcode for Philips Stadion is 5616.

Covid Restrictions may be in place when you visit Philips Stadion in 2023. Please visit the official website of PSV for full information on changes due to the Coronavirus.