The Riverside Stadium is a purpose built football ground located in the North Yorkshire town of Middlesbrough.

Home to Middlesbrough F.C since first opening in 1995, the 35,742 capacity ground was constructed at a cost of £16 million which has since proven to be a great investment.

The inaugural fixture at The Riverside stadium was held against Chelsea on 26th August 1995, a team which would later go on to defeat Middlesbrough in the 1997 FA Cup final at Wembley.

Attracting a record crowd of 28,286 fans – the largest in over 14 years, the move to the brand new ground coincided with the club’s return to the Premier League and kick-started an upward trajectory which marked a high-point in the club’s recent history.

Constructed as a direct response to the publication of the Taylor Report in 1990, Middlesbrough, along with Millwall who built The New Den, where one of the first clubs in England to build an all-seater stadium in order to comply with the new legislation.

Previously the club had played at Ayresome Park, however the 1903 created ground was located in a resident area and even after expansion the ground would have struggled to reach a capacity of 20,000.

After being offered a piece of land on the southern bank of the River Tees, east of the city centre, the club hired Taylor Woodrow Construction to build the £16 million pound stadium.

Constructed over a 32 week period beginning in the Autmun of 1994, the 30,000 capacity ground would later directly inspire Derby’s Pride Park Stadium which opened in 1997.

Initially known by the working title of Middlehaven Stadium after the local area fans were given the chance to choose the name during the Boro’s last ever match at Ayresome Park.

The most popular name chosen in the polls was Riverside Stadium, and upon opening the ground was officially referred to as the Cellnet Riverside Stadium after the BT owned company signed a deal worth £3 million lasting until 2002.

Within five years of opening, The Riverside stadium was expanded at the start of the 1998/1999 season after the club gained promotion back to the Premier League. Costing £5 million the corners between the north and south-west stands were filled in, giving the ground its additional capacity of 5,000.

If required in the future Middlesbrough already have planning permission to add another 7,000 seats to the ground which would increase the 34,742 capacity ground to 42,000.

Below is a seating plan of Middlesbrough's Riverside Stadium: 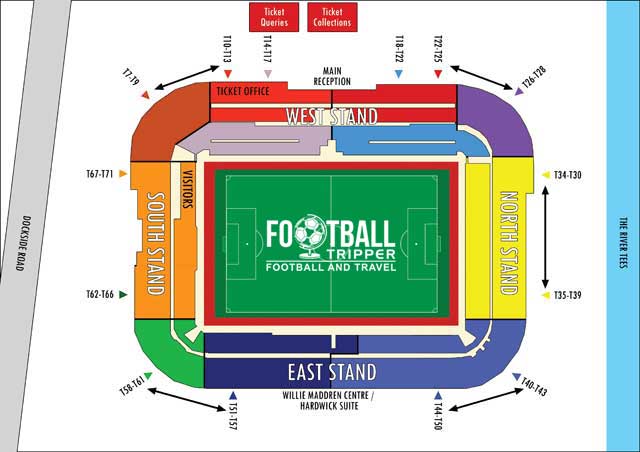 Middlesbrough’s ground is comprised of the following four sections: North, East, South and West which is the main stand.

Football fans who visit the Riverside stadium as away supporters are allocated tickets within the East Stand which runs for the length of the pitch opposite the main stand which contains the hospitality area and dugouts.

The standard issue of 3,500 tickets for the visiting club are designated towards the south-stand, and could be described as being in the south-east corner.

As is the case for all parts of the stadium with the exception of the west stand, the east stand consists of a single-tier which is essentially divided into an upper and lower section.

As a modern stadium, views throughout the riverside are uninterrupted, and the seats are both comfortable and as spacious as the distance trade-off from the pitch would allow.

After entering the East Stand via the electronic turnstile, fans enter a well-sized concourse which has a plentiful amount of food on offer ranging from the expected sausage rolls and burgers, to the local delicacy, “Parmo in a bun”.

Toilet facilities are more than adequate, and overall Middlesbrough represents a decent day out for football fans across England.

Around the ground itself there aren’t any independently run pubs which are suitable for football fans, as Brasserie Hudson Quay Bar-Restaurant appears to be the wrong type of place, although we’d be happy to be proven wrong.

For those who arrived by either car or coach this means that drinking inside is the only choice with there being a decent sized bar within the away concourse.

Near to the train station the range of drinking option are much greater with The Isaac Wilson and Dr Browns probably the best choice for the ale connoisseurs amongst us.

Besides the usual range of fast-food options inside the stadium, there is a Mcdonald’s south-east of the ground which always does a roaring trade, as does the Nando’s near to the station.

If you are either travelling from town or the city centre then you are spoiled for choice as there is a slew of independent restaurants and recognisable high-street names like KFC, Subway and Sainsburys.

With the exception of the official online Store, the club store located at the Riverside is the best place for fans to lay their hands on all the latest Boro merchandise.

The club shop has the following opening times depending on home matches:

It doesn’t appear as if Middlesbrough currently offer fans the chance to undertake a stadium tour of Riverside Stadium. If this changes, we’ll be sure to update this section.

How to buy Middlesbrough Tickets

Prices for the Middlesbrough home matches for the Championship are as follows:

Tickets can be purchased via the usual channels such as in person at the club shop/ticket office, via the telephone (0844 499 1234) and online courtesy of the club’s official e-ticket store.

How to get to Riverside Stadium

Where is Riverside Stadium?

The Riverside stadium is located approximately 1 mile north-east of Middlesbrough city centre beyond the A66 dual carriageway on the southern bank of the River Tees.

The stadium’s address for satnav is:

There are a certain amount of spaces at the Riverside Stadium with the club asking vehicles to arrive at least one hour before kick-off with the adjacent Shepherdson Way road becoming pedestrianised from around 2.00pm onwards.

To ensure your parking space please phone the ticket office on 0844 499 1234 – a certain number of spaces are reserved for permit holders and you never know if the club will change their current policy on a match by match basis or not.

Middlesbrough train station is located exactly 0.9 miles west of the Riverside Stadium, with the walking distance likely to take the average fan well under 20 minutes.

To get there by foot, exit the station on Bridge Street East and travel along Dock Street towards the River Tees for the most scenic route to the stadium.

Eventually you will come to the smaller Scott’s Road which will take you all the way to Boro’s ground, even crossing a bridge en route!

The majority of hotels are located back towards Middlesbrough city centre beyond the A66 with The Thistle Hotel and Travelodge being two of the most central examples.

There really isn’t that much choice around the stadium area with the usual suspects strangely absent.

Who plays at Riverside Stadium?

English side Middlesbrough play their home matches at Riverside Stadium.

What is the capacity of Riverside Stadium?

As of 2023 Riverside Stadium has an official seating capacity of 34,742 for Football matches.

When was Riverside Stadium opened?

Riverside Stadium officially opened in 1995 and is home to Middlesbrough

What is the postcode for Riverside Stadium?

The postcode for Riverside Stadium is TS3 6RS.

Covid Restrictions may be in place when you visit Riverside Stadium in 2023. Please visit the official website of Middlesbrough for full information on changes due to the Coronavirus.