Originally opened in 1878, the 24,500 capacity stadium on the site today bears little resemblance to the original facilities, with the most recent renovation occurring in 2008 when the Pavilion stand was rebuilt.

The land on which today’s stadium sits was originally known as Deepdale Farm until it was leased by North End Sports club. Predominantly used to host cricket and rugby matches, the agricultural associations soon began to disappear, and three years later Deepdale hosted its first football match on 5th October 1878.

As football grew in popularity heading into the 20th century, the newly formed Preston North End F.C scrambled to build terraces in order to accommodate the tens of thousands of fans who began turning up to their games by the 1920s.

The original and iconic Pavillion first opened in 1934 and the other stands became fully-roofed by the early 1980s.

After the tragic events of Hillsborough and the subsequent publication of the Taylor Report, British football underwent a period of soul-searching as the iconic terraces were banned in favour of seating which was believed to be more safe.

Preston initially held off making any drastic changes to Deepdale until The Lilywhites had formulated an exact vision of their future stadium. Inspired by Stadio Luigi Ferraris in Genoa, the club embarked on an ambitious all-seater stadium which would be capable of seating just under 24,000.

Constructed in four stages starting in 1995, the Old West Stand was the first to be demolished and it was replaced by the Sir Tom Finney Stand. Next to be built was the Bill Shankly Kop in 1998, followed by its opposite number, the Alan Kelly Town End in 2001, and finally it was followed by the Old Pavillion in 2008.

It may have taken 13 years, but the the re-imagining of the iconic Italian Stadium was finally completed, giving Preston a stadium it could be once again proud of.

Below is a seating plan of Preston North End's Deepdale Stadium: 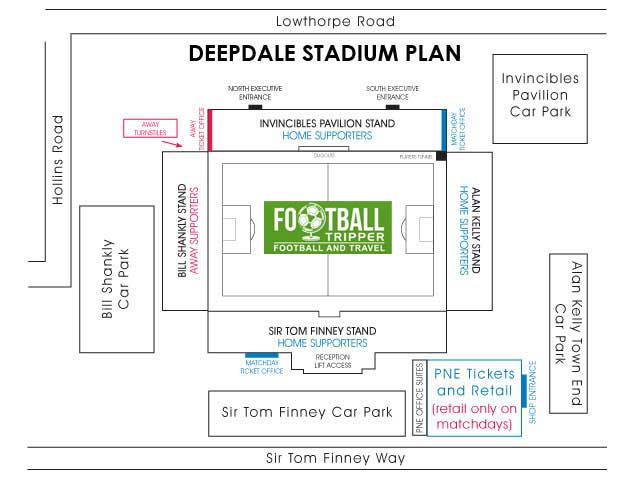 Travelling supporters are based in the North Stand which is known as the Bill Shankly Kop in honour of the legendary Liverpool manager and former Preston North End player.

Constructed in 1998 as part of staggered renovation works, the goal-end is capable of seating 6,000 fans but usually only 3,000 tickets are issued as standard to away supporters.

Although inspired by the Marassi Stadium in Genoa, the renovated Deepdale doesn’t follow the Italian stadium exactly and actually consists of a single-tier of seating rather than multiple-tiers.

This helps to create a more intimate atmosphere with the steeper incline of the seats naturally feeling closer to the pitch, particularly in the Kop stands.

The Sumners located on the corner of Watling Street and Deepdale Road remains the most popular pub for fans season after season with both sets of supporters more than welcome.

Open from 11.00 am on matchdays there is a beer garden for when the weather is nice and inside it is fairly spacious.

Within the concourses of the stands alcoholic drinks can of course be purchased although they cannot of course be consumed within sight of the football pitch.

Slightly further away from the stadium along Watling Street Road is the Withy Trees which has been described by Preston North End as being suitable for the more “discerning supporter who wants to discuss tactics”.

Within the stadium you can try the famous Preston delicacy of The Butter Pie which is made by the local Clayton Park Bakery a few miles from the ground.

Famous for the filling being made of Potato is is hugely popular with the home contingent and occasionally to the curious visiting supporter as well.

Preston North End operate a club shop at Deepdale Stadium in addition to the Lillywhites e-commerce site, the PNE Online Store. The opening hours for the store at the ground are listed below:

For more information, to confirm opening times or to check availability feel free to send an email to [email protected] or phone the store on 0844 8561965.

It doesn’t appear as if Preston North End FC currently offer fans the chance to undertake a stadium tour of Deepdale ground.

Tickets to see the Lillywhites at home can either be purchased via the ticket hotline (0844 856 1966), in person at the Deepdale ticket office or online from PNE Box Office. Ticket prices for the Championship are as follows:

How to get to Deepdale Stadium

Where is Deepdale Stadium?

The Lilywhites stadium is named after the Deepdale area of Preston which it is located in, approximately 1.2 miles north-east of the city centre next to Moor Park.

Deepdale stadium’s address for satnav is as follows:

The club operate two separate parking areas next to the ground, The Invincibles and Sir Tom Finney Car Park with fans asked to enquire about available spaces when booking tickets.

In addition to this there is the Moor Park Business and Enterprise School which offers parking for a reported £5 per game, with this option often recommended for visiting supporters.

The address for this is: 85 Moor Park Ave Preston, Lancashire PR1 6LR

Preston railway station is located approximately 1.5 miles southwest of Deepdale Stadium within the centre of town.

All of the hotels in Preston are essentially located in the city centre with the single exception of the Macdonald Tickled Trout Hotel and Premier Inn Preston East which are located out of town along the M6.

Back towards the town there is the Holiday Inn, The Sun Hotel and Legacy Preston International with the Station Hotel unsurprisingly being the closest to the train station.

Who plays at Deepdale Stadium?

What is the capacity of Deepdale Stadium?

As of 2023 Deepdale Stadium has an official seating capacity of 24,500 for Football matches.

When was Deepdale Stadium opened?

What is the postcode for Deepdale Stadium?

The postcode for Deepdale Stadium is PR1 6RU.

Covid Restrictions may be in place when you visit Deepdale Stadium in 2023. Please visit the official website of Preston North End for full information on changes due to the Coronavirus.