Oakwell is a multi-purpose sports venue located in the South Yorkshire town of Barnsley, North England.

Dating as far back as 1887, today’s 23,009 capacity ground bears little resemblance to the original set of facilities with Barnsley F.C’s home ground undergoing numerous renovations between 1992-1999.

The land on which Oakwell Stadium sits on today was first used to host the football matches of Barnsley FC back in 1888.

Founded as Barnsley St. Peters the previous year by clergyman Tiverton Preedy, fans often refer to the ground as just Oakwell however the name technically refers to the entirety of the club facilities at the site rather than just the stadium itself.

As a stadium which dates back to the early 19th century naturally a lot has changed over the years, although Oakwell does in fact retain some of its original features.

The main stand constructed on the western side of the pitch which dates back to the start of the early 1900s still exists to this day, and some sections of the stand even contain the use of wooden seats.

Historically Barnsley have spent more seasons in the second tier of English football than any other club, and not withstanding the solitary season in the Premier League during the 1997-1998 season, this has also been very much true of the modern era.

It wasn’t the publication of the Taylor Report in 1990 which introduced more stringent stadium safety legalisation that Barnsley, like the majority of clubs in England, began to redevelop their stadium.

With terracing essentially banned for top-flight clubs, Barnsley had to convert Oakwell to all-seating, and found that it would make more sense to simply rebuild most stands from scratch.

The ageing East stand was the first to be replaced in 1993, followed by construction of a new Pontefract Road End in 1995. The historic West Stand which houses the changing rooms was preserved, albeit fully converted to all-seating and most recently the north stand which houses away fans was redeveloped.

In the summer of 1998, the club added a new Corner Stand between the east and south stands to increase the range of corporate hospitality options available on matchdays.

Below is a seating plan of Barnsley's Oakwell: 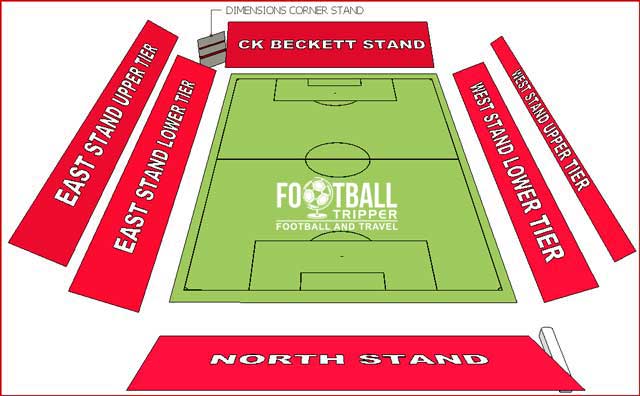 Oakwell Stadium is made up of the following four stands: The North Stand (large single-tier behind the goal), The East Stand (two-tiered all seating), The Ck Beckett Stand (South) and the West Stand which is the oldest part of the stadium.

The away fans normally watch the game from the newly constructed North stand which has a typical allocation of 2,000 tickets although this could theoretically be extended to around 6,000 if all of the seats were used.

Views throughout the stand are flawless with unobtrusive roof coverage, and the structure roughly divided into two approximate tiers.

For those coming from Barnsley railway station there is an abundance of choice within the nearby town centre with the Court House and the Joseph Bramah (Weatherpoons) being two reliable choices.

Slightly off the beaten track, five minutes south of Oakwell there is the Dove Inn which is a highly recommended CAMRA listed pub.

At the stadium there is the Barnsley run “Reds Bar” which is located next to the main reception within the C.K Beckett Stand. Inside a wide selection of real ale, other beverages and snacks but it looks like the club may reserve some space solely for Season Ticket Holders.

With the exception of Oakwell Sandwich Shop there aren’t loads of food options immediately around the vicinity of Barnsley’s stadium, with fans who come from the centre of town or the railway station much better placed to grab some grub.

From the Alhambra Roundabout where there is an Iceland Supermarket, you can exit onto Sheffield Road you can reach some cheap and cheerful takeaways including Pizza Roma, the Grill House and Barnsley Kebab & Pizza House.

The Tykes operate a shop at the stadium in addition to their own online store known as the Red Club Shop. The opening hours for the Oakwell shop are as follows:

It doesn’t appear as if Barnsley FC currently offer fans the chance to undertake a stadium tour of Oakwell. If this changes, we’ll be sure to update this section.

How to buy Barnsley Tickets

Advanced Prices for the Championship season are as follows, although expect a slight reduction for seasons in League one:

Tickets to see Barnsley play can be purchased via the usual methods such as telephone (+44 (0)871 2266777), email ([email protected]),  in person at the club’s ticket office/shop and most popularly on the internet at Barnsley’s e-ticketing site.

How to get to Oakwell

Oakwell Stadium is located quite centrally with the South Yorkshire town of Barnsley, approximately 0.6 miles south east of the city centre.

The site of the stadium is also shared with Barnsley FC’s training ground complex.

Oakwell stadium’s address for satnav is as follows:

Although there isn’t a club run car park there are two car parks close enough to the ground that Barnsley recommend to fans: The Metrodome Leisure Centre near to the club’s training ground towards the north of the stadium and Queens Ground.

Barnsley railway station is located exactly half a mile West of Oakwell which is around 5-10 minutes on foot depending on your walking speed.

Managed by Northern Rail the station has frequent services running to both Sheffield and Leeds.

There aren’t loads of hotels in Barnsley with your choice essentially boiling down to either the city centre or The out of town area between the M1 and the A628.

In town there is the Premier Inn Barnsley and the Marlborough Hotel and out of town close to the motorway is the Ramada Encore and Holiday Inn.

Who plays at Oakwell?

English side Barnsley play their home matches at Oakwell.

What is the capacity of Oakwell?

As of 2022 Oakwell has an official seating capacity of 23,009 for Football matches.

When was Oakwell opened?

Oakwell officially opened in 1888 and is home to Barnsley

What is the postcode for Oakwell?

The postcode for Oakwell is S71 1ET.

Covid Restrictions may be in place when you visit Oakwell in 2022. Please visit the official website of Barnsley for full information on changes due to the Coronavirus.