The KCOM Stadium  or Hull City Stadium is a multi-purpose sports ground (Football and Rugby) situated in Kingston Upon Hull named after Kingston Communications, the stadium’s sponsors.

The circular design allows unrestricted views across a single tier of seats with a current capacity of 25,400.

A new stadium was long overdue for the club after the facilities slowly became dilapidated, and it seemed as if no reasonable amount of renovation could save the outdated facilities.

Particularly at a time when other mid-sized teams were helping to redefine the modern ground with new stadiums being built in the late 1990s such as Pride Park and The Reebok Stadium.

Costing £44 million, the new stadium was largely funded by the local city council after they sold their percentage of shares in Kingston Communication.

The locally based company are now the main sponsors of the ground, and it is where the name KC Stadium comes from. Additional capital was also provided through Government grants for urban regeneration, and from the Football Stadium Improvement Fund.

Leased to Hull City A.F.C and the local Rugby club, the stadium has proved to be exceptionally popular with fans, and a real success story for the club.

Having fell into receivership a year before the stadium opened, there was no way that the club would have been able to finance a new stadium, and it is a great example of public and private based collaboration – similar in some ways to Manchester City’s Eastlands Stadium.

The inaugural match was held on the 18th December 2002 when the club invited Sunderland AFC to play a friendly which resulted in a 1 nil win for the home team.

The KC Stadium has since help to launch the Tigers onto a next-level of football, reaching the Premier League for the first time in the club’s history in the 2008/2009 season, and an FA Cup final appearance against Arsenal in 2014.

Currently there are rumours circulating that Hull City Council could expand the stadium’s capacity to 32,000 but nothing official has been announced as of yet.

On 4th April 2016, the stadium’s name was changed from KC to KCOM stadium following a rebrand from the sponsors. It was then changed again in 2021 to the MKM Stadium.

Below is a seating plan of Hull City's MKM Stadium: 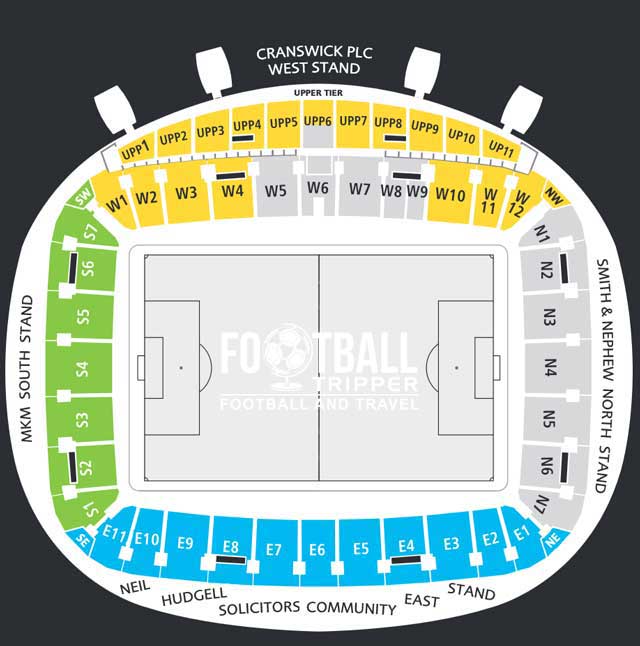 The four parts of the stadium are as follows: The Smith & Nephew Stand (North), The Solicitors Community Stand (East), The MKM Stand (South) and the Cranwick PLC Stand (West).

There are often conflicting reports of how receptive the pubs immediately around the KC Stadium are to away fans, with some suggesting that places south-west on Anlaby Road should be avoided.

Others recommend The Brickmakers and Walton Street Social Club opposite the entrance of the official car park which are believed to be more than welcoming.

The centre of town is generally fine for visiting supporters in small numbers with the Admiral of the Humber Wetherspoons pub often the first port of call for those who have just left Hull train station.

Proceeding north along Ferensway will take you up to Spring Bank Road which practically takes you to the stadium. Here there is the Spring Bank Tavern and Editorial Inn.

Inside the ground, pints of Carling or Marston are on offer for to drink at a fairly reasonable price.

The two main roads which connect KC Stadium with Hull city center are both lined with various takeaway outlets, and supermarkets which may provide something slightly healthier.

The city centre is awash with the more typical franchises including Greggs, McDonalds and Pizza Express.

Hull City operate a shop at the KC stadium known as “Tiger Leisure” in addition to an official online shop which shares the same name. The opening times are as follows:

For more information and to confirm matchday opening times you could send an email to [email protected] or phone the shop on 01482 509600.

Hull City offer guided stadium tours into the “inner sanctum” of the KC Stadium, allowing fans to take a behind the scenes look at the local ground.

How to buy Hull City Tickets

Tickets for Hull City can be purchased via the usual methods such as online ([email protected]), by phone (01482 505600) or in person at the stadium box office.

Premier League tickets were priced across three categories, however expect significant discounts for the Championship:

How to get to MKM Stadium

Where is MKM Stadium?

KC stadium’s address for satnav is as follows:

For Parking look no further than the stadium’s own car park located only a few hundred metres away across Walton Street. At £5 per car it is cheap as well as convenient although it can sometimes fill up quickly.

If you get there early enough in the day you can even catch a shuttle bus to the city centre to kill some time before the match begins if you fancy it.

Inside the city itself there are back-up parking options such as the spacious multi-storey car park on Pryme Street.

This is suited for 3.00pm Saturday kick-offs as it closed at 7.30 pm and allows you to avoid the inner stadium congestion after the full time whistle.

Lastly, always remember to check the relevant signage if you’re resorting to residential parking. Getting a ticket can often be a lottery, and you should avoid upsetting local residents if possible.

Hull railway station is located right in the centre of town at a distance of around 1.2 miles from KC Stadium.

Humberside Airport just south of the estuary is the nearest flight hub to the KC Stadium with the 18.8 mile journey by car likely to take around 30 minutes to drive.

Who plays at MKM Stadium?

What is the capacity of MKM Stadium?

As of 2022 MKM Stadium has an official seating capacity of 25,400 for Football matches.

When was MKM Stadium opened?

What is the postcode for MKM Stadium?

The postcode for MKM Stadium is HU3 6HU.

Covid Restrictions may be in place when you visit MKM Stadium in 2022. Please visit the official website of Hull City for full information on changes due to the Coronavirus.