The bet365 Stadium formerly known as the Britannia is the home of Premier League club Stoke City F.C and was built in 1997 for just under £15 million to replace the Victoria Ground which at the time was the oldest operational  football league stadium in England.

The Britannia Stadium first opened on the 30th August 1997 in a ceremony conducted by club icon Sir Stanley Matthews.

Known famously as the “Wizard of Dribble”, Matthews made over 259 first class appearance for Stoke, and it was only fitting that the local lad was chosen to help usher in a new era at the club.

Previously the club played their home matches at the 1878 built Victoria Ground, however in the wake of the Hillsborough Disaster and subsequent publication of the Taylor Report in 1990 the landscape of English Football changed.

Terracing was now banned for teams in the top two divisions, and for many clubs like Stoke this meant either conversion or relocation.

Costing £15 million to build, the decision to relocate to new facilities was made official in 1996, after the club engaged in a lengthy two year consultation period.

The club receive a grant of £3 million by the Football Trust, and raised a further £1 million by selling the naming rights to the stadium to Britannia Building Society on an initial 10 year deal.

After a construction period of around 18 months, the inaugural competitive fixture came against Swindon Town on 27th August 1997.

Attracting an impressive 23,859 capacity crowd, the first match didn’t quite go to plan as fans encountered mass congestion due to stadium planners neglecting to improve the surrounding infrastructure.

When Sir Stanley Matthews died in February 2000 his ashes were buried inside the stadium’s centre circle, and Stoke erected a statue outside of the ground in his honour.

Currently equipped with a respectable 27,743 capacity, there are no current plans to expand the stadium in the near future.

The stadium was renamed the bet365 stadium at the start of the 18 season.

Below is a seating plan of Stoke City's Bet365 Stadium: 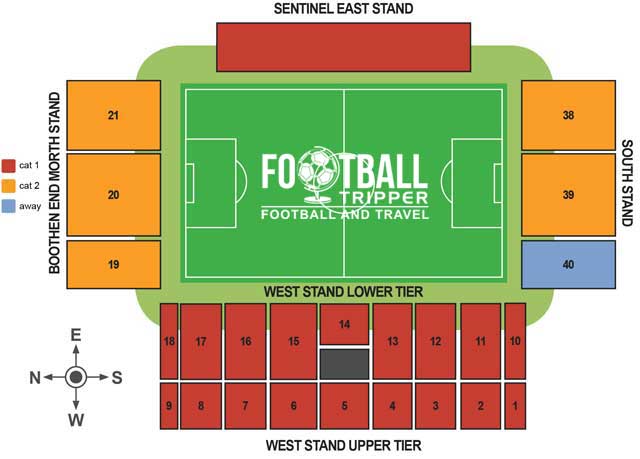 The four sections of the Britannia are: The Boothen End (North), The Sentinel Stand (East), The South Stand and The Q Railing Main Stand (West).

Travelling supporters who make the trip to the Britannia are housed within The Marstons Pedigree Stand which occupies the space behind the southernmost goal-end.

A medium sized, single-tiered construction, away fans share this part of the stadium with home supporters. The standard allocation is around 2,800 tickets issued per match.

Watching the game from the western side of the Marstons Stand next to the players tunnel and main stand, away fans have decent views of the action on the pitch.

Stoke have done a good job of modernising the Britannia and in ensuring that all visually intrusive support beams have been removed from the ground.

The concourse is more than adequate, and the selection of warm food such as pies and sausage rolls is much welcomed at half-time due to the lack of proper wind-breaker fitted to the side of the away stand.

The nearby Harvester restaurant and Holiday Inn five minutes north-east of the stadium the two most prominent bars in the area.

They both welcome away fans in small numbers as does the nearby Power League Five-aside centre and Longton Rugby Union Club 20 minutes south of the ground.

If you are travelling in through the centre of town where Stoke-on-Trent station is or Longton, there is The Terrace Inn on Leek Road which is popular as the official designated pub for away fans.

As one might expect from an out of town stadium fans are encouraged to use the club owned facilities around and within the ground, with the concourses well stocked with a typical selection of “refreshments” such as burgers, pieces, sausage rolls.

On City road which connects the centre of Stoke with Longton there are quite a few fast-food outlets such as KFC and McDonalds, with both stations surrounded by a decent number of quick dining options.

On Matchdays the club shop is open from 9.00 am right until kick-off, and then once again for 1 hour after the final whistle.

There is also the mail order hotline which you can phone on 01782 826419 and the official online store.

Lasting for 45 minutes they are available at the following prices:

How to buy Stoke City Tickets

Tickets for the Britannia can be purchased in a number of ways including online, phone (01782 367599) or from the ticket offices at the stadium and club shops.

Note: If the match isn’t sold out the ticket office will be open on the day of the match before kick-off, so if it isn’t a high profile match it may be worth chancing your arm.

How to get to Bet365 Stadium

Where is Bet365 Stadium?

The Britannia Stadium is located towards the South of Stoke-On-Trent approximately 2 miles from the train station and about 3 miles from Hanley – the shopping and night-life area of the city.

As far as parking is concerned, as the stadium is located on a business park out of town there are quite a lot of spaces near the ground.

Prices are generally no more than £5.00 at most, and will leave you within walking distance of The Britannia.

With Stoke-on-Trent station being just two miles away from the stadium it is usually the most popular option for travelling away fans and for those who live within the wider county of Staffordshire.

If you’re unsure where to go, either follow the crowd or ask one of the friendly policeman/locals – the walk will take you around 30 minutes.

An Alternate option is of course to take a taxi but with the queue from the station, it probably won’t save you much time in the end.

East Midlands Airport is technically the closest at the stadium at 36 miles away, however it doesn’t have a great range of European flight options.

Manchester International is much better equipped for foreign visitors, approximately 44 miles away, with a journey likely to take you one hour or so by car once you land.

There are quite a few B&Bs dotted around Stoke, but the closest options are undoubtedly the Holiday Inn towards the North East of the stadium within the same business park.

With a Harvester Restaurant and Pub, it is certainly the most convenient accommodation but is unlikely to be the cheapest or easiest to book on the day.

Who plays at Bet365 Stadium?

What is the capacity of Bet365 Stadium?

When was Bet365 Stadium opened?

What is the postcode for Bet365 Stadium?

Covid Restrictions may be in place when you visit Bet365 Stadium in 2023. Please visit the official website of Stoke City for full information on changes due to the Coronavirus.