Vale Park is the home ground of lower league football team, Port Vale. Located in the North-West city of Stoke-on-Trent in Staffordshire, the ground first opened in 1950 and today has a capacity of 19,052 following large scale renovations in 1998.

Port Vale relocated to Vale Park in 1950 after the club encountered financial difficulties during the onset of the Second World War.

Forced to sell The Old Recreation Ground to the council, initially there were hopes that the site would be leased back to the club, however when Port Vale realised that this was not feasible a new location was sought.

The club chose an affordable patch of land opposite Burslem park where the club had played in its formative years. Despite only recently overcoming financial troubles, management of the club planed to build an ambitious 80,000 capacity ground.

As was the case with all large grounds at the time, it drew comparisons with the national stadium where it was dubbed The Wembley of the North.

The new ground cost £50,000 to complete however it was only contained half of the much vaunted capacity. Consisting of two sections known as the Railway Stand and Lorne Street Stand, Vale Park contained 40,000 terrace spaces and an estimated 360 seats.

Besides the size of the ground, the pitch was also grabbing headlines at the time as it reportedly cost £100 – the most expensive ever laid at the time due to the site being a disused clay pit.

Relocation to Vale Park coincided with the most successful period in the club’s history, with Port Vale winning two divisional titles, and reaching the FA Cup Semi-final. Although they lost to West Brom, the local area was gripped by FA cup fever, and a few years later in 1960 the record attendance of just under 50,000 was set in a fifth round match against Aston Villa.

After the tragic events of the Bradford City Fire in 1985 new safety regulations saw the capacity of Vale Park reduced dramatically to 16,800.

Compounded by the publication of the Taylor Report a the start of the 1990s, the last remaining standing section, The Loren Street Terrace was finally demolished during the 1997-1998 season. A new £3 million pound stand replaced it although it remains incomplete.

Below is a seating plan of Port Vale's Vale Park: 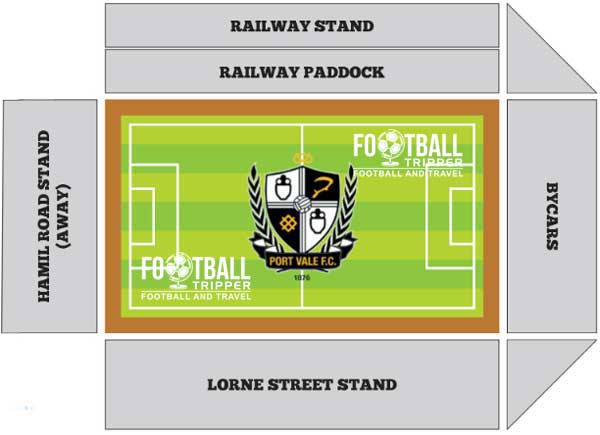 Away fans who visit Vale Park are housed within the southernmost part of the ground which is currently known as the Signal One Stand.

Due to low attendances, the entirety of the stand is allocated to the traveling contingent which equates to around 4,500 potential seats but in reality most clubs will be doing well to bring anywhere near 1,000 supporters.

Very much a non-thrills stand, the single-tier construction doesn’t offer the greatest views of the pitch for two main reasons: firstly there are four support beams which are necessary for the roof and secondly, the each level of seating has a very shallow incline which makes it hard to see if you are sat behind anyone slightly taller than yourself.

On the plus side the noise travels well due to the relatively low height of the roof and wind-breakers attached to the sides of the stand, and the food available in the concourse is reasonably filling and more than reasonably priced.

Within the area of Longport which is where Port Vale’s stadium is located it can be real hit and miss for away fans as reportedly a handful of pubs display signs in the window which read “Home Fans Only”.

Port Vale operate kiosks in all of the stands with the usual selection of pies, burgers, hotdogs and hot beverages, and although there are a number of burger vans dotted around the ground there aren’t actually too many permanent food outlets.

For this, you’re better off heading back down Hamil Road to the more built up area of town on Newcastle Street. here there is the likes of KFC, Uppercrust, and numerous independent retailers who offer affordable grub to line your stomach with.

Port Vale operate a club shop at Vale Park located on Hamil Road where the ticket office is in addition to their own official online site known as PortValeShop.Com.

For more information, to confirm opening times or to check availability feel free to phone the store on 0871 221 1876.

It doesn’t appear as if Port Vale FC currently offer fans the chance to undertake a stadium tour of Vale Park.

How to buy Port Vale Tickets

Tickets to see The Valiants at home can be purchased in person from the club’s ticket office at Vale Park, Monday to Friday between the hours of 9.00 am to 5.00 pm.

Fans can also order tickets by phoning 01782 655821 or sending an email to [email protected] Lastly, and most popularly you can purchase tickets on the internet by visiting Port Vale Tickets.

Ticket prices are listed below:

All other Stands including Visitors

How to get to Vale Park

Where is Vale Park?

Vale Park is is located in Burslem which is one of six towns which forms the amalgamated city of Stoke-on-Trent, and it is approximately 3.8 miles from this recently defined city centre.

Vale Park stadium’s address for satnav is as follows:

Parking is located just off of Hamil Road towards the south-west of the stadium with signs labelled as “Zone C” which you can follow. Parking spaces are limited so ensure that you get there early!

Port Vale FC are based north of Stoke-on-Trent with the station there likely to be the one you initially travel to when seeing The Valiants in action.

Located around 3.5 miles from the stadium a journey by foot would likely take you around 1 hour which isn’t reasonable for most of us and so there are a few options.

Firstly you could take the easy way out and taxi it at a cost of around £12-15. Secondly you could catch the train to Longport Station which is located west of Vale Park and will leave you with a walk of around 25 minutes.

Third and lastly, you could catch a bus to Burslem town centre and make your way to Hamil Road from there.

The closest accommodation option to Port Vale’s stadium is probably The George Hotel which is on the Scotia Road which is around 5-10 minutes walk south of the stadium.

The remaining options are all located back towards Stoke city centre with The Best Western and the Quality Hotel acting as good bridges between this, and the stadium.

Lastly, North Stafford Hotel located near to Staffordshire University is the closest to the train station.

Who plays at Vale Park?

What is the capacity of Vale Park?

As of 2023 Vale Park has an official seating capacity of 19,052 for Football matches.

When was Vale Park opened?

What is the postcode for Vale Park?

The postcode for Vale Park is ST6 1AW.

Covid Restrictions may be in place when you visit Vale Park in 2023. Please visit the official website of Port Vale for full information on changes due to the Coronavirus.