Rodney Parade is the home ground of current League Two football team Newport County A.F.C. Located in the Welsh city of Newport, the stadium dates as far back as 1877 although the facilities today bear little resemblance to the originals of the 19th century.

The current capacity stands at 9,097 although this is reduced slightly for football matches.

The site of the stadium was originally owned by Lord Tredegar, and in 1877, two years after the formation of Newport Athletic Club, the members were able to secure the use of the land for sporting activities including the likes of cricket, tennis, rugby and athletics.

Owing to the popularity and growth of rugby in the United Kingdom in the 20th century, the ground was predominantly used by Newport RFC before eventually becoming associated with football in the 21st century.

In May 2012, Newport County FC located from Newport Stadium to Rodney Parade on an initial three year deal but quickly agreed a further 10 year lease after fans and the club settled in well.

At the time The Exiles certainly believed that they had moved into the ground at a fortuitous moment as the stadium owners announced council-backed redevelopment plans with a view to increase the capacity of the ground to 15,000.

Initially announced on the 4th September 2007, the work has been a long time coming, and the completion of the new East Stand in 2011 has so far been the only physical manifestation of the plans.

With negativity setting in amongst some fans of the rugby club, announcements were made that the redevelopment is now expected to occur over a period of years, at a much slower pace than originally anticipated.

The incremental approach is now favoured as it would cause less disruption to the current facilities.

Below is a seating plan of Newport County's Rodney Parade: 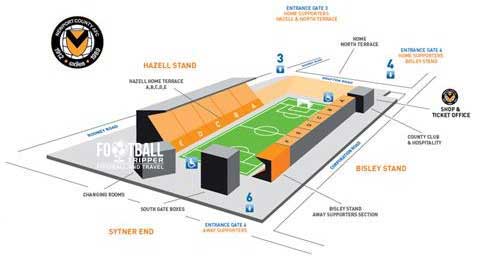 Newport’s ground is made up of four sections: The North Terrace, The Bisley Stand (East), The South End, and The Hazell Stand (West).

Away fans are primarily housed in The Bisley Stand which is a fully covered all-seated section of the stadium which is shared with home supporters.

Capable of accommodating approximately 580 visitors, the home supporters are separated by a small section of green netting with an additional 400 seats available located in the temporary stand located in the South End of the stadium.

Uncovered, and exposed to the elements, this is used when the away contingent is expected to be larger and perhaps unsurprisingly has worse views than its permanent neighbour.

The away entrance to the stands are located along Corporation Road which bypasses the main entrance of the stadium at the opposite end of the ground. The turnstile is marked by a few peculiar looking blue poles.

Outside the turnstiles there is a small ticket office for away fans situated within a portakabin, and this only adds to the antiquated journey most away fans will encounter when visiting Rodney Parade.

Next to the main entrance at the ground there is the club run bar which welcomes away supporters, and gets predictably busy on match days perhaps partially due to the lack of alternatives nearby.

There is the Victoria Hotel on Corporation Road but it doesn’t look very welcoming in the slightest, meaning that the Godfrey Morgan, The Wetherspoons Pub on Chepstow Road is usually more popular. This is located approximately 10 minutes away from the visitors’ stand.

Other than those three options you’re looking at a 15 minute walk back into the town centre with The John Wallace Linton on Cambrian Road and The Queen’s Hotel on Bridge Street two popular choices with fans who visit Newport on the train.

There is a food outlet just inside the ground by the turnstiles serving amongst other things; Hot Dogs, a selection of Pies & Pasties, Sausage Rolls, and Chips. Outside there is a dedicated “food area” next to the Clubhouse near the main entrance which is popular with fans who want to get a pint and a bite to eat before finding their seat.

Outside the stadium there are a few food choices within the town centre with Chepstow Road where the popular Wetherspoons is located the pick of the bunch.

Here there is quite a few places to grab something to eat such as a Fish and Chips or a Greggs Sausage Roll.

Newport County operate a club shop at Rodney Parade in addition to their own e-commerce website, The NCAFC Shop. The opening times for the store at the stadium are as follows:

It doesn’t appear as if Newport County AFC currently offer fans the chance to undertake a stadium tour of Rodney Parade.

How to buy Newport County Tickets

Tickets to see The Exiles can be obtained via the expected channels such as telephone (01633 670690), email ([email protected]), in person at the stadium club shop and on the internet by visiting Newport County Tickets.

Please note that the above prices apply to those booking tickets in advance. If you plan to pay on the day expect to see a price increase of around £2 per adult ticket.

How to get to Rodney Parade

Where is Rodney Parade?

Rodney Parade stadium is located on the eastern bank of the River Usk less than half a mile from the main railway station and historic town centre.

Rodney Parade Stadium’s address for satnav is as follows:

As the ground is town based there isn’t a large purpose built car park instead you will have to contend with on street parking where possible or park further away and walk into town.

Newport (South) Wales is the nearest train station to Rodney Parade, located less than half a mile away across the River Usk.

The closest hotel to Rodney Parade is probably either the Gateway Hotel or The Victoria which is part of the Blu sports Bar.

Back across the River Usk there is a Travelodge next to the train station and the highly rated Queen’s Hotel which sells it self as having “Budget rooms above a lively Victorian Pub”.

Who plays at Rodney Parade?

What is the capacity of Rodney Parade?

As of 2022 Rodney Parade has an official seating capacity of 9,097 for Football matches.

When was Rodney Parade opened?

What is the postcode for Rodney Parade?

The postcode for Rodney Parade is NP19 0UU.

Covid Restrictions may be in place when you visit Rodney Parade in 2022. Please visit the official website of Newport County for full information on changes due to the Coronavirus.