The Memorial Stadium or its old name Memorial Ground which it is still commonly referred to as is the home of Bristol Rovers FC. Capable of accommodating 11,916 fans per match including 3,000 seats, the main stand has often been described as being more fitting of a cricket field than a football pitch.

Memorial Stadium’s land was used for public entertainment purposes as far back as 1891 when Colonel William “Buffalo Bill” Cody held a Wild West Show there between 28th September and 3rd October. Less than two years later the first sporting fixture took place with Clifton RFC playing a game of Rugby on their during the start of the 1893 season.

Converted into allotments during the First World War, the land officially became known as the Memorial Ground in 1921 when Bristol Rugby Club erected the first basic facilities. The wooden stands were eventually erected over the course of the 20th century, with the West Stand – the only remaining original feature demolished and replaced in 1995.

Bristol Rovers entered into a ground-sharing arrangement with the Rugby Club in 1996, and have made it their permanent home ever since. Planning permission for a new 18,500 capacity stadium was granted back in January 1997 however numerous delays thwarted any progress.

Plans for a new stadium were resurrected almost five years later in September 2012, however once again The Pirates look set to sail on tempestuous seas with an ongoing legal dispute with Sainsbury’s regarding the purchasing of the land at Memorial Stadium.

The record attendance was set on 9th February 2008 when Bristol Rovers took on West Bromwich Albion in the quarter finals of the FA Cup. An estimated 12,011 supporters saw The Pirates Cup run come to an end, after impressively claiming the scalps of Fulham, and Southampton.

Below is a seating plan of Bristol Rovers's Memorial Stadium: 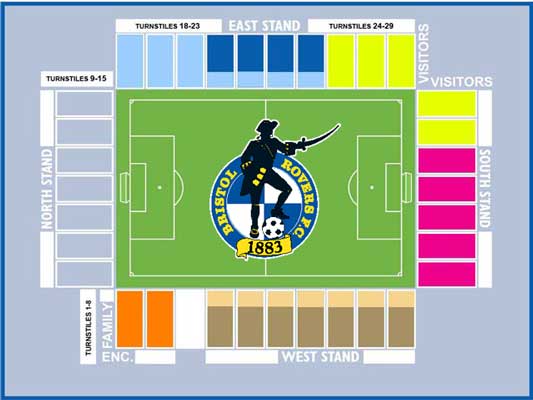 Away fans are housed within the south-east corner of the stadium split between the East Stand which terraced, and the south stand which is fully-seated. The standard allocation of tickets is around 1,100 however it can sometimes feel like less due to the two separate areas, and the relatively open nature of the ground which hinders acoustics.

Away tickets booked in advance cost £16.00 for the visitors terrace or £19.00 for a seat in the visitors stand. If you pay cash on the turnstile or attend a Category A match then you must pay £2.00 more.

There are a few pubs on Gloucester Road where you can get a pint on the way to the stadium, and plenty more back in the city centre for after the match.

Bristol Rovers operate a club shop at the Memorial Stadium as well as an official online store which is known as BRFC Direct.

On Saturday match days the club shops opens from 9.00 am until kick off which is always 3.00 pm and then again for around 30 minutes after the full time whistle.

Don’t be silly, there’s no guided tour of The Memorial Stadium!

How to buy Bristol Rovers Tickets

Tickets to see Bristol Rovers in action at the Memorial Stadium can be purchased in advance online and at the club shop for a £2.00 early bird discount. If you purchase on the day of the match then you will have to pay normal prices which are outlined below:

Category A matches also carry an additional fee of £2.00 however the majority of matches each season are Category B.

How to get to Memorial Stadium

Where is Memorial Stadium?

Memorial stadium is located approximately 2.6 miles north of Bristol City Centre in the area of Horfield which predominantly residential. The walk would likely take you the best part of 1 hour so it isn’t really advised if you’re planning a relaxing football trip.

There is a small car park at the Memorial stadium however there are no spaces available to the general public on match days. The club recommend parking on either Gloucester or Muller Road which are around 5-10 minutes walk away.

By taking the train to Montpelier station you can cut the journey by foot. down to a more manageable 1.6 miles. Taking the average fan around 30 minutes, you’re essentially saving half the walking time by getting the train.

You could also get off at the next stop which is called Bristol Parkway, however it’s not any closer, and results in more time on the train. Of course this is assuming that you are catching the train from Bristol Temple Meads.

Bristol is actually one of the larger city’s in England, and surprisingly popular with tourists. There’s plenty of accommodation options including Hotel Ibis in the centre, The Premier Inn near Broadmead and Holiday inn Express near Temple Meads train station.

Who plays at Memorial Stadium?

What is the capacity of Memorial Stadium?

As of 2023 Memorial Stadium has an official seating capacity of 11,916 for Football matches.

When was Memorial Stadium opened?

What is the postcode for Memorial Stadium?

The postcode for Memorial Stadium is BS7 0BF.

Covid Restrictions may be in place when you visit Memorial Stadium in 2023. Please visit the official website of Bristol Rovers for full information on changes due to the Coronavirus.