Home Park has been the home of Plymouth Argyle Football Club since first forming way back in 1893, although the facilities at the site today bear little resemblance to the originally stadium over 100 years ago.

Home Park, known by some fans as “The Theatre of Greens” perhaps in a parody of Manchester United’s “Theatre of Dreams” has been the home stadium of the club since the clubs formation in 1892.

Considerably developed in the 1920s and 1930s a lot of this work proved to be thankless after the ground sustained serious damage in the after math of the Second World War.

With the club essentially starting from scratch by the time the Football League resumed in 1945, numerous improvements were made to Home Park throughout the 20th century in the post-war period, including the construction of a two-tiered grandstand in the 1950s and the addition of floodlights.

The largest construction project came in 2001 when three brand new stands were designed and built within a year, between February 2001 and 2002.

The stadium eventually became all-seater at the start of the 2007-2008 season after the last section of terracing was converted in the summer.

In 2011 the club entered administration and Plymouth City Council agreed to purchase the freehold back from the club at a cost of £1.6 million, with annual rent charged at a generous £135,000.

This reality is in stark contrast to the bold designs proposal for the Fifa World Cup 2018 Bid which would have seen the stadium become a 46,000 state of the art sports facility.

Below is a seating plan of Plymouth Argyle's Home Park: 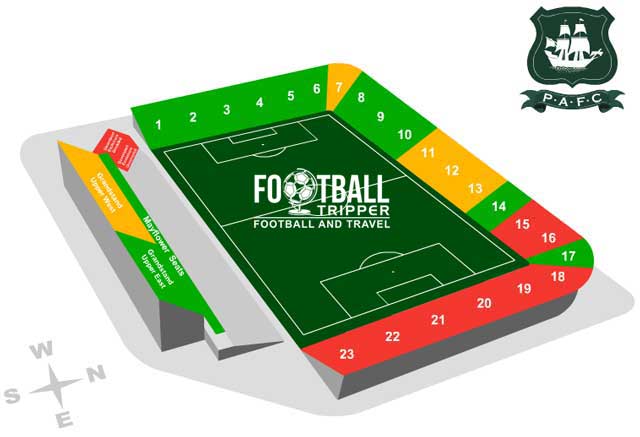 How to get to Home Park

Where is Home Park?

Who plays at Home Park?

What is the capacity of Home Park?

As of 2022 Home Park has an official seating capacity of 18,600 for Football matches.

When was Home Park opened?

What is the postcode for Home Park?

The postcode for Home Park is PL2 3DQ.

Covid Restrictions may be in place when you visit Home Park in 2022. Please visit the official website of Plymouth Argyle for full information on changes due to the Coronavirus.