Kassam Stadium or Grenoble Road is the home ground of Oxford United Football Club, who currently compete in League Two which is the 4th highest tier of English Football.

Plans to create what would become known as Kassam Stadium were first formulated back in 1995 when the board of Directors announced on the 7th June plans to replace the dated facilities at Manor Ground.

The vision was a to create a brand new 16,000 capacity state of the art stadium within Blackbird Leys area of Oxford by the end of the decade in time for the new millennium.

With construction beginning in the Summer of 1996 plans appeared to be on track for the project nicknamed Minchery Farm after the building site, but just over 18 months later in December 1997 construction was halted following accusations that contractors were not paid.

Financial problems and lack of liquidity meant that no further progress was made for over three years until February 2000.

It was only when Firoz Kassam purchased the club in April 1999 and agreed to reduce over 90% of the club’s unsecured debt, that Oxford could afford to proceed with the new stadium.

The ground opened on 4th August 2001 with a friendly against Crystal Palace, and whilst an improvement on Oxford United’s old ground, it didn’t quite live up to its potential.

Firstly it was completed after the end of the decade deadline, secondly only three stands were completed which meant that it had fallen short of its expected capacity of 16,000 and lastly in the time it took to construct the stadium, the club’s on field performances suffered and the club were relegated to the lowest division of League football for the first time in 30 years.

The stadium is unofficially known by some supporter groups as the “The United Stadium” and occasionally Grenoble Road.

Below is a seating plan of Oxford United's Kassam Stadium: 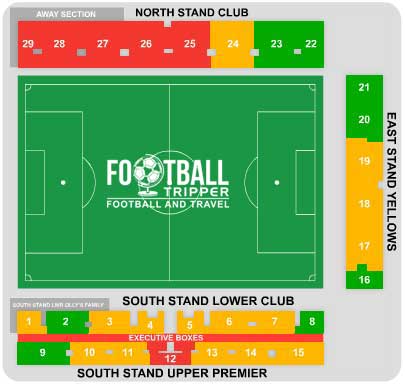 Kassam Stadium is made up of three sections: The Manor Hospital Stand (North), The Oxford Mail Stand (East) and The Main Stand (South).

Away fans are housed within the left hand side of the 5,026 capacity North Stand, with the right hand side towards the enclosed East Stand reserved for the home faithful.

Situated towards the open part of the stadium where there is no barrier to the wind, it can feel rather cold during the winter months so make sure that you wear an extra layer or bring gloves and a scarf.

As a modern 2001 constructed stadium the views from the stands are excellent, with many supporters noting the reasonable leg room and relaxed approached to stewarding which helps to generate decent noise from both sets of supporters on matchdays.

The only complaint that is occasionally raised by visitors is that the time it takes to get served is slightly too long, with fans of the bigger clubs lamenting the excessive time it takes to grab a drink before the match and during half-time.

The efficiency of the stalls within concourse may well have improved now though!

Located south of Oxford town centre there really isn’t a plethora of “proper” drinking options around The Kassam, particularly since The Priory.pub closed down. Fans can either choose to proceed to the ground to have or drink or they can try one of the bars nearby.

These include the nearby Holiday Inn Express Hotel towards the east of the stadium which has a decent sized bar and televisions, The Gala Bingo Hall if you can bear it or the Bowlplex located next to DW Sports Fitness next to the club car park.

If you are heading in from Oxford Train Station then you will certainly not be dehydrated with the centre of town having numerous pubs of varying literary pretensions such as The Old Bookbinders Ale House and Jude The Obscure.

Towards the stadium itself The George within Littlemore is popular with supporters as it acts as a go-between the station and the ground which is approximately 10 minutes away.

The majority of pubs in Oxford are welcoming to both home and away fans alike, although establishments will exercise discretion when permitting some fans to enter.

Whilst there aren’t many dining options around the ground, inside The Kassam you will not starve with the typical types of football food on offer including cheeseburgers, hotdogs and sausage rolls.

The city of Oxford around 3.5 miles north of the ground is well equipped with everything from chain restaurants to independent delicatessens.

The Us run a club shop at Kassam Stadium in addition to their own official online site, The Yellows Clubshop.

It doesn’t appear as if Oxford United FC currently offer fans the chance to undertake a stadium tour of Kassam Stadium.

How to buy Oxford United Tickets

Tickets to see Oxford United at home can be purchased via the usual channels including telephone (01865 337533), email ([email protected]), in person at the stadium ticket-office (Monday – Friday: 9.30 – 5.30 pm) and on the internet by visiting Oxford United e-Ticketing.

Ticket prices are listed below with advanced prices first followed by (On the day):

How to get to Kassam Stadium

Where is Kassam Stadium?

Kassam Stadium is approximately 3.5 miles south-east from the centre of Oxford just past the Littlemore area off of the A4142 eastern by pass road.

Kassam Stadium’s Address for satnav is as follows:

There is a car park at Kassam Stadium with unreserved spaces for approximately 2,000 cars per game.

Operated on a “first come, first served” basis, the car park is completely free and if there is a big game the overflow can be served by the car park across the road at the VUE Cinema just past the club shop.

Oxford train station is just over 4.2 miles from Kassam Stadium by foot and for many of us unfit slobs this is too far to walk.

You can either choose to get a taxi from here which is likely to cost you anywhere between £10-15 depending on your negotiation skills.

The closest hotel is undoubtedly the Holiday Inn Express which is literally a stones throw from Kassam Stadium to the east.

If you’re planning on making a weekend of it then you’re much better off booking something back towards Oxford Town centre with the club recommending The Four Pillars Hotel (Oxford Spires) exactly for this.

Who plays at Kassam Stadium?

What is the capacity of Kassam Stadium?

As of 2023 Kassam Stadium has an official seating capacity of 12,500 for Football matches.

When was Kassam Stadium opened?

What is the postcode for Kassam Stadium?

The postcode for Kassam Stadium is OX4 4XP.

Covid Restrictions may be in place when you visit Kassam Stadium in 2023. Please visit the official website of Oxford United for full information on changes due to the Coronavirus.