Crown Ground or Wham Stadium for reasons of sponsorship is a purpose built football stadium located in the Lancashire city of Accrington. Home to local side Accrington Stanley F.C since opening in 1968, the ground has a current capacity of 5,057 which includes 2,000 seats.

Below is a seating plan of Accrington Stanley's Crown Ground: 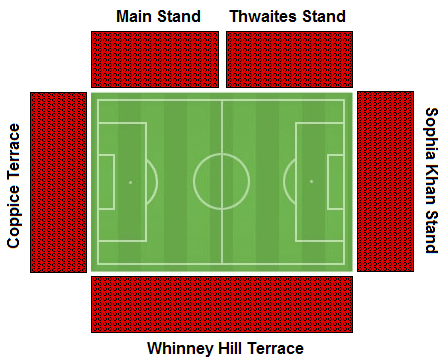 The four (five) stands at Crown Ground are as follows: The Jack Barret Memorial and Thwaites Stand (North) , Clayton End known as the Sophie Khan Stand (East), Whinney Hill Terrace (South) and the Coppice End (West) which is where the away fans are partially housed.

Away fans are located in the Coppice Terrace behind one of the goals which has a maximum capacity of approximately 1,800 although in reality this is usually much less with traveling support ranging from a couple of hundred to just under one thousand. This is very much a typical stadium for fans of lower league football with the designated Coppice End Stand consisting of a mixture of both seating and terracing in a seemingly arbitrary ratio.

It is also “classic lower league” in the sense that there is no roof or cover which means the traveling fans are exposed to the elements which can make for one of the more painful or rewarding matchday experiences depending on the time of year you visit the ground and whether or not your club comes home with the three points.

For fans luckily enough to have been allocated a seat there have been some complaints regarding leg room, and others report a lack of noise-amplification due to the absence of the roof but overall quirks aside, Accrington Stanley’s Crown Ground is a decent day out for away fans.

The closest pub to Accrington’s stadium is the Crown Inn which is located on Whalley Road which is the main road used by fans to access the ground. Run by the club itself. As every pint or drink purchased at this pub provides a financial boost to Stanley it is popular with fans, although the spacious beer garden, plenty of space and televisions with Sky are usually all it takes to convince the average football fan.

5 minutes from the ground back towards the town centre there is also the smaller Grey Horse pub which is a Thwaites run watering hole meaning that you can be sure that there is a decent selection of ale on hand.

Away fans are permitted into the Accrington Stanley F.C run pub, the Crown Inn located near the entrance of the stadium.

The usual food options are available at the Store First Stadium with the typical burgers and Clayton Park Pies available to the discerning football fan. Opposite the Grey Horse pub there is the Oaklea Fish & Chip shop which is always busy on matchdays, and failing this there is a McDonalds and other options located in the town centre.

The official club shop is open during the week Monday – Friday 9.00am until 5.00pm and whenever a home match is on for a few hours before kick-off. You can also get an idea of merchandise in advance by browsing Accrington’s Online Store, although it is admittedly not the nicest user experience.

It doesn’t appear as if Accrington Stanley FC currently offer fans the chance to undertake a stadium tour of Crown Ground. If this changes, we’ll be sure to update this section.

Football fans from across England, particularly those of Premier League clubs, can rejoice in the fact that the majority of matches at the Store First Stadium allow you to just turn up at the ground and pay at the turnstile before kick-off.

In the rare exceptions such as high-profile cup draws where this isn’t the case the club will notify fans via the website and social media but in 99.99% of all cases as a home fan you do not need to book your tickets in advance.

Whilst the club suggest that there are three categories of match at the Store First depending on the opposition prices routinely looking like:

*Over 65s and Students with valid identification.

Disabled supporters and one carer also fall under concessionary pricing with a total of 20 wheelchair bays available for fans within the Jack Barrett Stand. As this section is shared by both home and away fans the club asks visitors to contact them in advance to purchase a ticket.

Crown Ground is located approximately 1 mile north of the Accrington town centre and it is accessible via the A680 Whalley Road which intersects the centre of town.

There are a small number of car park spaces available to drivers around the streets surrounding the stadium and within the land adjacent to the ground to the east which is owned by the local amateur football team although there is no club owned parking facilities.

Accrington railway station is the main train station serving the local town located on the East Lancashire Line served by both Nothern Rail and Caldervale Line express services.  One you have arrived it takes around 20 minutes to make the northwards journey to the stadium via foot with the following directions:

The official website of Accrington Stanley recommends the Maple Lodge Hotel which is a AA 4 star diamond rated guest house located in Clayton-le-Moors approximate 1.5 miles from the centre of town.

With decent reviews on trip advisor it may be worth checking out, but the small capacity of just 8 rooms may make this option not feasible for those who can’t book in advance in which case check out other hotels in the local area.