Used equally for both football and rugby, the multi-purpose stadium currently has a capacity of 10,284, and was constructed in 1990 at an estimated cost of £3.5 million.

Wycombe Wanderers moved to brand new facilities at Adams Park in 1990 after selling off the land containing their former stadium, Loakes Park, to the local health authority who used it expand Wycombe General Hospital.

Through this sale, the club were able to fully finance their new stadium and replace the rapidly deteriorating stands which were last  renovated in the 1970s.

Located within the green environs of the Sands Industrial Estate, Adams Park initially opened with a capacity of 6,000 for the 1990 – 1991 season with a fraction under 1,300 seats.

Contrary to what you might think Adams Park’s name is derived from a former captain and benefactor rather than the local area or road it is situated on. Frank Adams  helped purchase Wycombe Wanderer’s former club, Loakes Park, which directly financed the stadium when it was sold.

Coming up to nearly 25 years old, a few renovations have occurred in the short history of the stadium including the addition of crush barriers within the terraces in 1993 and a few years later in 1996, the conversion to all seater for three out of four stands.

The 10,000 capacity was reached for the first time in the club’s history in 2005 when the club played then Premier League Champions, Chelsea, in a pre-season friendly.

There has since been suggestions that Wycombe’s ground could be expanded to 12,000 but this would require the construction of a new road to alleviate the increased matchday congestion.

Below is a seating plan of Wycombe Wanderers's Adams Park: 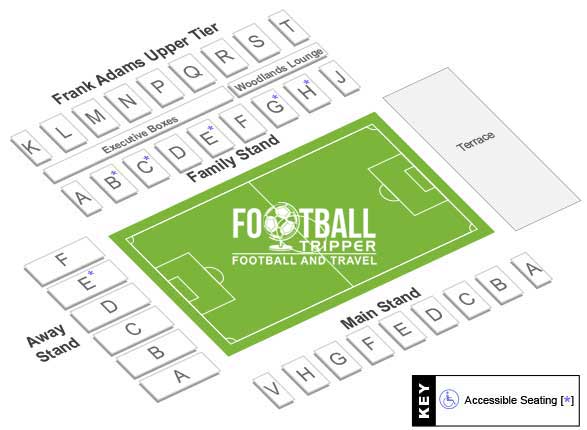 Travelling fans to Adams Park watch the game from the Dreams Stand which is capable of accommodating approximately 2,000 supporters.

Located towards the east of the ground behind the goal, the all-seating stand sits opposite the home terrace, and is a relatively new construction.

The views from the stand are excellent with no pesky support beams blocking any of the action on the pitch, and the woodland setting offers one of the nicer backdrops to lower league football.

Away ticket prices for Adams Park for are listed below:

At the stadium there is the Scores Bar which is located within the main stand next to the reception and is suitable for both sets of fans, otherwise there aren’t many other drinking options around Adams Park as it is situated within an industrial estate.

Back towards the centre of town there are a few high-street chains such as Yate’s and O’Neill’s near to the station, as well as The Hour Glass which is typically the last stop before many fans get to Adams Park.

The Vere Suite serves warm food and allows free entry both sets of fans. Child friendly, the restaurant/bar area opens at 12.00pm for Saturday 3.00 pm kick-offs and around 5.30 pm for evening fixtures.

At the ground there is a “free” cash machine outside the bar which is always useful.

Wycombe Wanderers operate a club shop at Adams Park in the Beechdean Stand in addition to their own official online site, The WWFC Shop . The opening times for the store at the ground are as follows:

For more information, to confirm opening times or to check availability feel free to send an email to [email protected] or phone the store on 01772 338 899.

Wycombe Wanderers offer fans the chance to undertake a stadium tour of Adams Park before every home game with the last session taking place no later than 12.30 pm.

This leads us to believe that tours are only available before Saturday home games but you should contact the club to confirm this upon booking.

How to buy Wycombe Wanderers Tickets

Tickets to see The Chairboys in action can be bought via the expected methods including telephone (01494 441118), in person at the Adams Park ticket-office (Monday – Friday: 9.00 am – 5.30 pm) and online by visiting the Wycombe FC’s ticketing web page.

How to get to Adams Park

Where is Adams Park?

The home of Wycombe Wanderers FC is located within Sands Industrial Estate which is approximately 2.5 miles west of High Wycombe town centre.

The address for your satnav is:

It is located on Sands Industrial Estate, however once you get into High Wycombe you should be able to follow those familiar brown football signs to the stadium.

Street parking is available in limited quantities around the vicinity of the ground with supporters advised that zealous traffic wardens patrol the area. Thus it’s advisable that you park as “correctly” as possible, respecting residential driveways and vehicles.

There are also some small parking facilities at the ground itself with Upper Tier parking in the official club car park costing £5, with the car park behind the JFC building on Hillbottom road also costing the same.

High Wycombe railway station is located on the other side of town approximately 2.8 miles east from the stadium.

The main train operator is Chiltern Railways, with services from London Marylebone, and Birmingham’s Snow Hill serving two ends of the country.

If you’re looking to walk to the ground the two and a half mile journey or so is manageable at around 50 minutes providing you allow yourself enough time but it certainly isn’t the most enjoyable of strolls.

Located in an industrial area of Wycombe, there aren’t any hotels in the immediate area,  with the majority of accommodation options located northwards on West Wycombe Road.

These include the Clifton Lodge Hotel which is the closest to Chapel lane, the Buckingham Hotel and Travelodge which is close to the railway station.

Who plays at Adams Park?

What is the capacity of Adams Park?

As of 2023 Adams Park has an official seating capacity of 10,284 for Football matches.

When was Adams Park opened?

What is the postcode for Adams Park?

The postcode for Adams Park is HP12 4HJ.

Covid Restrictions may be in place when you visit Adams Park in 2023. Please visit the official website of Wycombe Wanderers for full information on changes due to the Coronavirus.