Synonymous with the disaster which occurred in 1989 resulting in the tragic death of 96 Liverpool fans, the ground today has a capacity of 39,732.

Hillsborough Stadium has been the home ground of Sheffield Wednesday since 1899, with the inaugural fixture played against Chesterfield on September the 2nd. In the post-war period it grew to become one of the largest and most Premier grounds in England.

Originally known as Owlerton Stadium after the local suburb, it was renamed to Hillsborough in 1914 in recognition of the newly created parliamentary constituency.

Today the name of the ground is synonymous with one of the worst ever stadiums disasters in the world. Selected as a neutral venue for the 1989 FA Cup semi final, Liverpool FC were set to play Nottingham Forest on 15th April however the game was abandoned after a huge crush in the Leppings Lane end occurred, killing 96 Liverpool fans and injuring hundreds more.

The tragedy changed the face of modern football in Britain, and despite the effort of South Yorkshire Police to divert the blame onto unsavoury elements of hooligans, the Taylor Report concluded that “the main reason for the disaster was the failure of police control”.

The 1990 published inquiry recommended that all top-flight stadiums converted from terracing to all-seating as soon as possible.

Nominated as one of the host venues of Euro 1996, the ground received funding and was renovated to modern international standards.

Hosting three matches of the Danish National Team, the tournament was immensely popular across the country, and combined with the league cup final replay between Leicester City and Middlesbrough it allowed the city of Sheffield to exorcise some demons.

Although the physical appearance of Hillsborough changed and may continue to do so, football fans from across the world will never forget the tragedy which occurred on that fateful day.

Outside of the main entrance there is a memorial, and it is commonly adorned with flowers from visiting supporters.

Below is a seating plan of Sheffield Wednesday's Hillsborough: 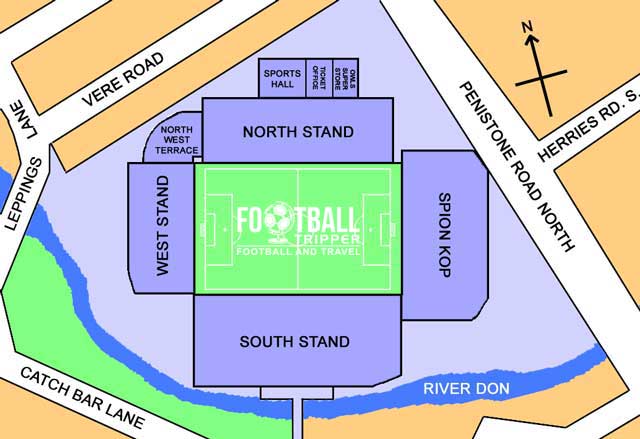 Sheffield Wednesday’s ground is comprised of the following four sections: The North Stand, The Kop End (East), The South Stand and The Leppings Lane End (West).

Visiting supporters are normally housed within West Stand which is informally known as the Leppings Lane End.

This is where the tragic (and largely preventable…) death of 96 Liverpool fans occurred, and although the standard allocation of around 3,700 seats usually occupies the upper-tier, the lower tier is also used for larger matches bringing the potential capacity up to around 6,000 if need be.

First constructed for the 1966 World Cup, Sheffield Wednesday’s West Stand isn’t the most modern of stands, with a conversion to seating in the lower-tier occurring in time for the 1991-1992 season.

Views from here aren’t great which is why fans are located upstairs by default which is slightly better. There is however the existence of two support beams which can partially obstruct some views of the pitch.

The concourse inside the stand leaves a lot to be desired with some serving hatches for food fortified with unappealing steel mesh which is reminiscent of either a pawn-shop or a prison.

The food and drink options on sale are to be expected and overall Sheffield Wednesday is a popular day out for fans wanting to visit a “proper” 20th century English stadium.

Whilst there are a number of pubs within the area of Hillsborough such as the Park and the Old Crown, these generally tend to be reserved for home supporters.

Twenty minutes or two tram stops away there is The Rawson Spring Wetherspoons pub which has plenty of space with 2 floors, as well as The New Barrack Tavern which specalises in real ales.

Both pubs are more than happy to admit away fans in small numbers, although may turn away larger groups.

If you are traveling in from Sheffield City centre then there are plenty of watering holes to drink from, with the Old Queen’s Head which is housed within a timber-framed medieval building being a popular choice.

There is also the Sheffield Tap and The Roebuck to consider.

North of Hillsborough Park there is a small parade of shops next to Asda which consists of a Chippy, a Chinese and Curry House, and to the south there is a further choice including a KFC and McDonalds on the large Penistone Road.

Similar to the pub situation there is much more choice within the city centre, and near to the train station.

Wednesday’s club shop at Hillsborough is known as the Owls Megastore and has an impressive range of blue and white merchandise, second only to the club’s official online store.

The store at the stadium has the following opening times/hours:

Sheffield Wednesday occasionally offer tours of Hillsborough with the club appearing to offer around one a month, usually in the 3rd or 4th week onwards.

If you keep checking the online tickets event page you will be able to see the available tour dates on offer to the general public.

How to buy Sheffield Wednesday Tickets

Tickets to see the blue and white half of Sheffield play at home can be obtained via the usual channels including the aforementioned shop and ticket office at the ground, via the ticket hotline (0871 900 1867), and the official online club shop.

Ticket prices for the Championship are now listed below, and are priced under a standard three-tiered pricing model consisting of Category A, B and C:

How to get to Hillsborough

Located in the Sheffield suburb of Owlerton and parliamentary constituency of Hillsborough of which the stadium takes its name, Wednesday’s ground is approximately 3 mile north-west of Sheffield city centre.

Hillsborough Stadium’s address for satnav is as follows:

Parking is available north of the ground with a car park called “Wednesdayite” located behind the Spion Kop and the Middlewood Park & Ride which is popular and open to both sets of fans.

The club reserves some parking for disabled supporters at the stadium, but none for the general public due to limited space.

Sheffield Railway Station is located within the city centre approximately 3.2 miles south-east of Hillsborough Park with the walk likely to take the best of us 60 minutes.

Thankfully the city has decent public transport including a dedicated tram system which acts as several mini surrogate train stations.

The Alara Bed and Breakfast located just north of Hillsborough Park is the closest hotel to Sheffield Wednesday’s Ground with the majority of options located back towards the centre of the steel city.

The Garrison and Hillsborough Hotel located on Penistone Road are two of the better located options which are exceptions to this rule. Jurys Inn and Hotel Novotel located on the edge of University Campus are the two closest options to the station.

Who plays at Hillsborough?

English side Sheffield Wednesday play their home matches at Hillsborough.

What is the capacity of Hillsborough?

As of 2023 Hillsborough has an official seating capacity of 39,732 for Football matches.

When was Hillsborough opened?

Hillsborough officially opened in 1899 and is home to Sheffield Wednesday

What is the postcode for Hillsborough?

The postcode for Hillsborough is S6 1SW.

Covid Restrictions may be in place when you visit Hillsborough in 2023. Please visit the official website of Sheffield Wednesday for full information on changes due to the Coronavirus.