Elland Road is a 1897 built football stadium located in the West Yorkshire city of Leeds.

Home to Leeds United A.F.C since the club’s formation in 1919, the ground has a capacity of 37,890 which makes it the 13th largest in England and second largest outside of the Premier League division.

Elland Road has been home to Leeds United since the club’s formation back in 1919.

Previously used to host the fixtures of both Leeds City and Holbeck Rugby Club, the stadium was originally called the Old Peacock Ground after the pub opposite the pitch, however it shortly became known as Elland Road after the first stand was erected at the start of the 1898-1899 season.

Before Leeds United moved into the ground, the ground was developed by resident team Leeds City who constructed three covered stands.

The club attracted decent sized crowds in their first season in the league with an estimated 22,500 fans watching the local derby against Bradford City on 30th December 1904.

The club’s success was not to last however as they were expelled from the football league in 1919 after a scandal emerged involving illegal payments to footballers during the war.

Leeds United purchase the ground for a bargain £250, and slowly began to ascend up the structure of the football league. Elland Road remained largely unchanged in the period immediately after and before the war, only really developing when iconic manager Don Revie took over in the 1960s.

The record attendance of this era was set on 15th March 1967 when 57,892 fans watched an FA Cup match against Sunderland when the club were in the First Division.

Like the majority of British clubs, the tragic events of Hillsborough and subsequent publication of the Taylor Report in 1990 was set to have a profound impact on modern day football.

The club undertook its largest renovation project in 1992 when the Lowfields was replaced by two-tiered 17,000 capacity stand. By 1994 the ground was an all-seater after the famous Kop terrace was converted.

Since the turn of the millennium different chairman have proposed relocation to new stadiums, however nothing has materialised so far.

Peter Risdale’s plans in 2001 were scuppered by financial turmoil, and recently emerged plans to remodel the ground for the 2018 world cup have all but failed as they were contingent on England being awarded the right to host the tournament.

Below is a seating plan of Leeds United's Elland Road: 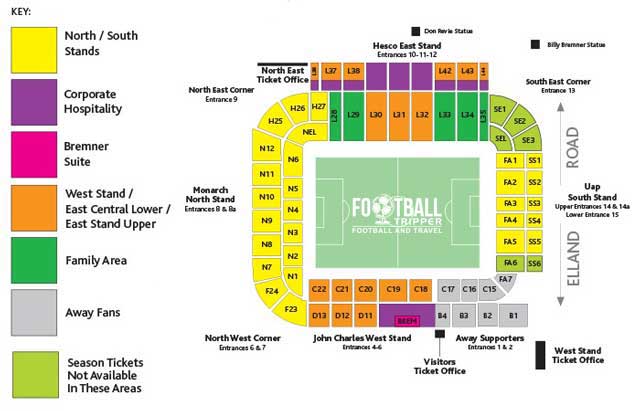 Traveling football fans who make the journey to Leeds United’s stadium to see their team in action are housed within the John Charles Stand which runs for the length of the pitch on the western side.

Essentially consisting of a two-tier arrangement, the 3,000 or so allocation of tickets are usually for the top-tier with other sections of the stand reserved for home supporters.

The stand is slowly beginning to show its age with the away section’s seats apparently still to this day a combination of both wood and plastic materials.

Although some parts of the John Charles Stand have unrestricted views, a good number of the spaces in the second tier have partially obscured views from the pillars which support the roof.

Inside the concourse itself and outside the ground you’d have to be particularly ungenerous to pick faults with the matchday arrangements, with the turnstiles, concourse, and kiosks operating in an unexpectedly efficient manner.

The Stewards are however slightly more contentious with some fans suggesting that swearing is banned. F…

Between the east and south stands there is a club-run bar for away supporters known as Howards. It opens a few hours before kick-off and requires you to produce your ticket upon entry which ensures no home fans enter.

Although it may seem a bit extreme, it does help create a lively atmosphere on matchdays!

As for outside the ground, behind the south stand is The Old Peacock on Elland Road which as the name implies, is reserved for home supporters only.

The only “proper” pub within the immediate vicinity of the stadium, the next closest is Drysalters which is located 10-15 minutes further along Elland Road.

To reach it, turn right (with your back to the south stand) and proceed along past the Police HQ and under the railway Bridge until you see it on your left hand side.

There’s a McDonalds located on the corner where Lowfields Road and Elland Road meet which is always popular on matchdays, with a Burger King at the other end of the famous road next to B&Q and the second M521 exit.

There is also a Subway franchise located behind the south stand.

Leeds United’s club store at Elland Road stocks a wide range of football merchandise and  has the following opening times:

You can also purchase Peacock products online from: https://www.lufc.talent-sport.co.uk/

Leeds United offer fans the chance to go behind the scenes at Elland Road with a fully guided tour of the clubs usually off-limits facilities such as the players dressing room, tunnel and the manager’s dugout.

Running on Saturdays at 11.00 am and Sunday at 2.00 pm throughout the season and departing from Billy’s Bar in the south stand, tickets cost £15.00 for adults and £10.00 for Seniors and Children making it a reasonable priced day out for the family.

To see the latest tour times, find out more information and to book your place, please visit this stadium tour page on the club’s official ticket sellers website.

How to buy Leeds United Tickets

Tickets to see Leeds United AFC play football can be purchased via the usual channels such as telephone (0871 334 1992), in person at the Elland Road superstore/West Stand ticket office and Online from the official ticket vendor.

The club operates a three tiered pricing system based on anticipated levels of demand and the profile of the opposition with Category A being the most expensive and Category C the cheapest.

Leeds try to incentivise booking your tickets in advance by adding a £5 premium onto all adult tickets purchased on the day of the match, and as this is such a large charge, it makes sense to secure your tickets early.

Ticket Prices for the Championship are as follows (Categories A, B, C):

How to get to Elland Road

Where is Elland Road?

Elland Road stadium is located out of town approximately 2.3 miles south of Leeds city centre, next to the city’s ring road and M621 stretch of motorway.

Around the ground Leeds City Council operates several car parks for use on matchdays in collaboration with The Peacocks.

Costing £6.00 for cars, £12.00 for mini-coaches and £20.00 for coaches, these are the easiest way to park when watching Leeds play football with street parking restricted to only those who hold residential permits.

Leeds railway station is located just over 2 miles away north east of Elland Road Stadium which equates to a walking time of around 40 minutes for the average fan.

The station has regular services to and from the major cities in the UK with London’s King Cross station just 2 hours and 15 minutes away.

The closest hotel to Elland Road is The Premier Inn Leeds City West Hotel which is located on the other side of the M621 accessible from Gelderd Road.

The Bewley’s Hotel Leeds a decent shout if you plan to walk to the stadium as it is located roughly half way between there and the city centre.

Next to the station there are the usual suspects such as Travelodge, Marriott and slightly further North, a Radisson Blu.

Who plays at Elland Road?

What is the capacity of Elland Road?

As of 2023 Elland Road has an official seating capacity of 37,792 for Football matches.

When was Elland Road opened?

What is the postcode for Elland Road?

The postcode for Elland Road is LS11 0ES.

Covid Restrictions may be in place when you visit Elland Road in 2023. Please visit the official website of Leeds United for full information on changes due to the Coronavirus.