Carrow Road is a football stadium with a capacity of 26,034 and is home to Norwich City football club.

The stadium has undergone several redevelopments throughout its history and is situated between Norwich railway station and the river Wensum.

Norwich City F.C moved to their current home of Carrow Road in 1935 after their former stadiums at both Newmarket Road and The Nest proved to be insufficient in size for The Canaries fan-base.

Built over an short period of 82 days, Carrow Road was the second largest construction job in Norwich since the Castle, and thus was jokingly dubbed, “The eight wonder of the world”.

Inheriting its name from the street which runs parallel to the River Wensum, Carrow Road opened on the 31st August 1935 with the inaugural Second Division match held against West Ham United.

Attracting a crowd of 29,779 the match was a thoroughly entertaining 4-3 home win, which helped to ignore the city’s passion for the “grass theatre”.

When floodlights were installed in 1959 the club took a huge financial risk, however the gamble paid off after the club reached the semi-final of the FA cup.

Carrow Road continued to grow in the post-war period with the capacity of the ground peaking in the 1960s when a record attendance of 43,984 was set in a match against Leicester City F.C.

Carrow Road, like all British grounds, had to contend with newly introduced stadium safety legalisation.

Starting with the Ibrox Stadium disaster in 1971, the capacity was more than halved to 20,000, and after the tragic events of Hillsborough and the subsequent publication of the Taylor Report the ground was converted to all-seating in the early 1990s.

Today’s Carrow Road is very much a modern football ground, and it has a well-sized capacity of 27,000. T

he program of modernisation which started  in 1992 when The Barclay Stand was demolished was finally completed in 2004 when the Jarrolds Stand – the only remaining original stand was rebuilt.

Below is a seating plan of Norwich City's Carrow Road: 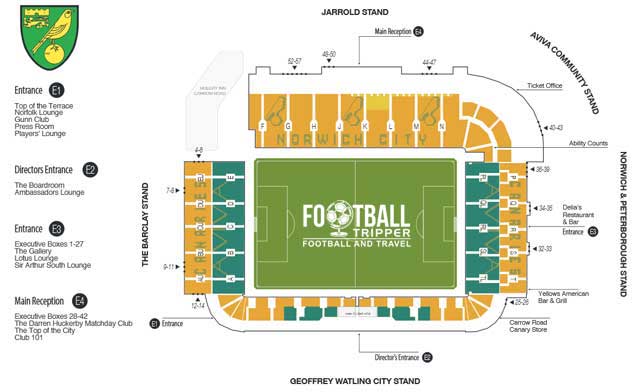 Visiting supporters to Carrow Road are housed within The Jarrold Stand which stretches for the length of the pitch on the southern side of the pitch.

As a reasonably large stand, it is usually shared with some sections of Norwich’s support, with the standard allocation of around 2,500 tickets located towards The Barclay Stand taking up less around a third of the available space.

Fully opened on the 21st February 2004 with a match against West Ham, the Jarrold Stand is a modern construction and as you would expect it offers spectators flawless views of the pitch due to the cantilever roof and well-spaced, comfortable seating.

Outside the stadium itself and within Norwich city centre there are numerous pubs and dining option s with the riverside “Compleat Angler” opposite the railway station hugely popular with away fans due to its basic menu, good range of ales and affordable prices.

There is also a shopping and leisure complex known as “The Riverside” a little further along which has a ever reliable Wetherspoons.

As you are probably aware, Delia Smith, the famous British Cook is the one of the joint owners of the club and she ensures that all pies are lovingly baked and made on site with classics such as Steak and Kidney, Chicken and Mushroom getting the celebrity culinary treatment.

The no-nonsense classics are of course in addition to regular “Matchday specials” which are more adventurous and vary from game to game such a Sausage and Bean, and Chicken Tikka.

The Canaries actually have three shops spread throughout Norwich city: Chapelfield, The Mall and Carrow road which is the one you will find at the Stadium with information below:

How to buy Norwich City Tickets

Norwich City sold out the majority of their matches in their maiden season in the Premier League, however attendances have naturally dropped since returning to the Championship, as has the price of tickets.

When the club are in the Premier League tickets are priced using a four-tier system: A+ (Most expensive), A, B and C (Least expensive).

For more information you can go down to one of the three Norwich ticket shops, phone the club on 0844 826 1902, or email ticket[email protected]

How to get to Carrow Road

Where is Carrow Road?

Carrow Road is located towards the South-East of Norwich City Centre less than 10 minutes away from where the train station is located.

Parking wise, travelling fans recommend Norfolk County Hall which has capacity for 2,000 cars, and only costs £6.00 for the day.

It is advisable that you get their early as possible if you want to get a space.

Norwich Railway station is the northern terminus of the Great Eastern Mainline directly from Liverpool Street in London. If you’re coming up from the South you’ll probably be routed through here.

East Midlands Trains runs services to the North and Midlands, stopping at Manchester Piccadilly, Sheffield, Nottingham, Peterborough and Ely at the frequency of approximately one per hour.

We were pleasantly surprised to find that there is actually a Norwich International Airport with flights seemingly serving a range of low-cost European destinations such as Majorca, Tenerife, and Amsterdam.

Maybe if they ever get into Europe this will be handy for away fans, but for now the airport is pretty useless!

Right outside the stadium there is a large Holiday Inn Hotel which might be a sensible choice for those looking to slump to bed after the match has ended, perhaps during a late midweek kick-off.

Otherwise you’re probably better of looking at options nearer the city centre due to there being more choice and much prettier surroundings.

Who plays at Carrow Road?

What is the capacity of Carrow Road?

As of 2023 Carrow Road has an official seating capacity of 26,034 for Football matches.

When was Carrow Road opened?

What is the postcode for Carrow Road?

The postcode for Carrow Road is NR1 1JE.

Covid Restrictions may be in place when you visit Carrow Road in 2023. Please visit the official website of Norwich City for full information on changes due to the Coronavirus.