Falmer Stadium is the 2011 constructed stadium of Brighton & Hove Albion who currently play football in the Championship.

Known as the American Express Community Stadium or The Amex for short, the 30,750 state of the art stadium cost approximately £93 million.

The relocation of Brighton & Hove Albion to Falmer Stadium was hardly the result of meticulously planning.

Without having a new stadium planned, the club’s former board decided to sell Brighton’s home in 1995, Goldstone Ground, which saw the club be evicted and transplanted 75 miles away in Kent where they had to groundshare Gillingham’s Priestfield Stadium.

Within two seasons, the club were able to return to the city of Brighton by leasing Withdean Athletics Stadium, however the stadium required renovation in order to bring it up to Football League Requirements.

Fans of the club persevered however, when the club announced that they had identified the location of Falmer for a new Stadium during the 1998-1998 season.

Initially the club had hoped to move into the new ground at the turn-of the millennium, however plans were essentially delayed for a decade. Whilst planning permission was provisionally granted in 2002 by the unitary authority, complicated arose due to the site’s status as an area of Outstanding Natural Beauty.

Construction work finally began on 27th November 2008, and finished just over three years later in May 2011.

Built by the Buckingham Group and Designed by famous football architects KSS who redeveloped Stamford Bridge in 2001, and The Etihad in 2003, Falmer Stadium was designed with potential expansion in mind. Within one season of opening 8,000 additional seats were installed, increasing the capacity to 30,750.

The official sponsorship name of Falmer Stadium is The Amex, which is named after American Express Europe who are the largest private employer in the area.

The inaugural match was held against Tottenham Hotspsur on 30th July 2011, with the first competitive game held against Doncaster Rovers a week later on 6th August 2011.

View of The Amex

Below is a seating plan of Brighton FC's The Amex: 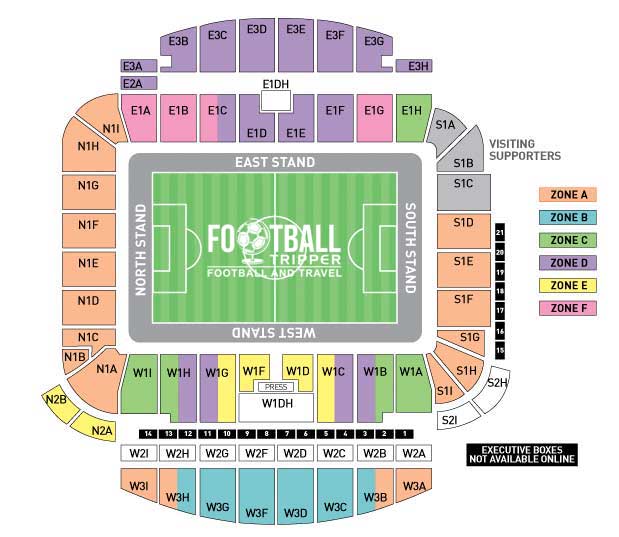 The Amex is comprised of the following four sections: North, East, South and West.

The Amex Away End

Fans who visit The Amex to watch their team away from home are tucked in the corner, with the standard allocation of around 3,300 fans, distributed amongst the south-east section of the ground between the east and south lower-tiers of seating.

As a new stadium the views are on the whole pretty impeccable with no sight-line restrictions, however the away section is still arguably the least desirable spot within the ground.

That’s not to say that The Amex is by any means a bad stadium – it’s far from it, with padded seats as standard, and generous amounts of leg room for every supporter watching the match.

The concourse is equally impressive with plenty of space and facilities on offer which reduces the feelings of being in a stampede when trying to use the toilet at half-time.

The pies reportedly rank amongst some of the most expensive in the Championship costing £4.10 a piece, although they are locally sourced from an independent manufacturer in Shoreham-on-Sea, which may appeal to a fan’s sense of social responsibility.

Lastly, whether design or accident, The Amex has fantastic acoustics which makes the atmosphere on matchdays pretty electrifying for a ground “out in the sticks”.

Located out of town the only pub nearby which is always open on matchdays is the Swan Inn. However this is only usually reserved for the home supporters, which leaves away fans with very little choice, barring inside the ground itself.

On the campus of a large university you would suspect that there might be a few bars but these aren’t usually open for the prime Saturday 3.00 pm kick-off slot.

Within Brighton city centre it is a completely different matter with more pubs nearby than you could ever visit in a weekend.

One highly recommended pub for fans of real-ale is The Evening Star which is less than five minutes from the main train station and listed in the CAMRA beer guide.

Similar to the pub situation, besides the ground itself, there really aren’t too many food options on hand once you get to Falmer station.

If you are brave, you might try venturing across to the nearby University campus which appears to be abuzz with Cafes and and a co-op, although opening hours may be out of synch with the rest of the real world.

The Seagull’s superstore at the stadium opened in the Summer of 2014 and in addition to the official online store, has everything and more merchandise wise than a fan can dream of. The opening hours are as follows:

As one of the most modern football stadiums in England tours for the Amex are in high demand and the club have put together a tour route which lasts approximately 1 hour 45 minutes making it one of the most comprehensive footballing history lessons in the country.

Taking in the trophy room, the changing rooms and the new Albion museum, the tours cost just £13 for adults and £6.50 for concessions with a family ticket (2 adults, 2 children) coming in at £39 pounds.

Tours routinely run on Mondays, Thursdays and Saturdays including on matchdays and can be booked by either phoning the ticket line on 0844 327 1901 or visiting the Amex ticket office.

How to buy Brighton FC Tickets

Tickets for Brighton & Hove Albion are priced across a three-tiered structure (A, B, C) based on perceived levels of demand and security risk for each match.

As a modern stadium there are quite a few different seating options within each stand so the below figures only give you an approximation of prices.

How to get to The Amex

Where is The Amex?

Brighton and Hove Albion’s stadium is located inland from the coast around 4 miles away from Brighton City centre.

The Amex Stadium’s address for satnav is:

Brighton and Hove Albion boast some of the best parking facilities in the Championship although they require you to book in advance (0844 327 1901) and pretty expensive at a cost of £13.00 in advance, or £15.00 three days prior to the game.

Once you have received your parking voucher make sure you display it in your window and when you arrive stewards will direct you to your space.

Fans are advised to book a space at the Bridge Car Park, and under no circumstances are fans allowed to use the car park unless they have booked in advance. Stern.

Lastly, there are numerous Park and Ride schemes listed on page three of the link you might want to check out to avoid the oppressive on site parking rules.

Falmer railway station is the closest to The American Express Community Stadium with the distance and resulting walk less than 150 metres and 60 seconds respectively.

It lies on the East Coastway Line with services operated by Southern including 4 trains to and from Brighton city centre per hour.

It should also be noted that free local bus and train travel is included with game tickets meaning if you travel from London you only need to pay to get to Haywards Heath and your ticket should take you the rest of the way.

Public Transport of The Amex

Hotels Near The Amex

You’d think that between the University of Sussex and The Amex there would be at least one hotel nearby but there isn’t, with the Newmarket inn located 2.3 miles east on the A27 technically the closest option, providing you have a car.

All of your other options involve hopping on the train back to Brighton city centre and booking something on the seafront such as the Holiday Inn, The Mercure or The Sandalwood hotel.

If you’re planning on making a weekend out of it this is probably for the best anyway.

Who plays at The Amex?

English side Brighton FC play their home matches at The Amex.

What is the capacity of The Amex?

As of 2023 The Amex has an official seating capacity of 30,750 for Football matches.

When was The Amex opened?

What is the postcode for The Amex?

The postcode for The Amex is BN1 9BL.

Covid Restrictions may be in place when you visit The Amex in 2023. Please visit the official website of Brighton FC for full information on changes due to the Coronavirus.