Keepmoat Stadium is a multi-purpose sports venue located in the South Yorkshire town of Doncaster.

Home to Doncaster Rovers Football Club who are currently in League One, the 2006 built stadium has a capacity of 15,231 and cost an approximate £20 million to build.

The Keepmoat Stadium’s inaugural competitive match was held on 1st January 2007 against Huddersfield Town, although the officially opening ceremony was held to be held later on against Premier League Superstars Manchester United on the 3rd August 2007.

The timing of the move essentially split the season in half between the new and old stadium.

Doncaster had previously played their home matches at Belle Vue Stadium since 1922, and whilst the ground was very much loved by fans, the dilapidated ground was sadly holding back the club.

In the wake of the Bradford City and Hillsborough stadium disasters in the 1980s, large sections of Belle Vue were deemed unsafe and the capacity was diminished greatly to 4,859.

The Vikings valiantly renovated the historic stadium in 2003, and by the time it hosted its last match against Nottingham Forest on 23rd December 2006 it was capable of accommodating 11,500 supporters.

However this wasn’t sustainable in the long term, and Doncaster pressed ahead with their long-term ambition of building a new stadium.

Collaborating closely with the local council and Doncaster Rugby League Club, the trio of stakeholders designed a new multi-purpose sports stadium which cost £20 million to build.

Situated out of town within a wider retail complex which cost a further £12 million, the new stadium is a state of the art venue capable of seating an improved 15,231 supporters.

Although Doncaster Rovers don’t own the stadium outright, the club have secured a 99 year operating lease from the local council, and are responsible for the management of the facilities.

The name of the stadium is derived from sponsors Keepmoat who are a company who specialise in the construction of council housing.

Below is a seating plan of Doncaster Rovers's Keepmoat Stadium: 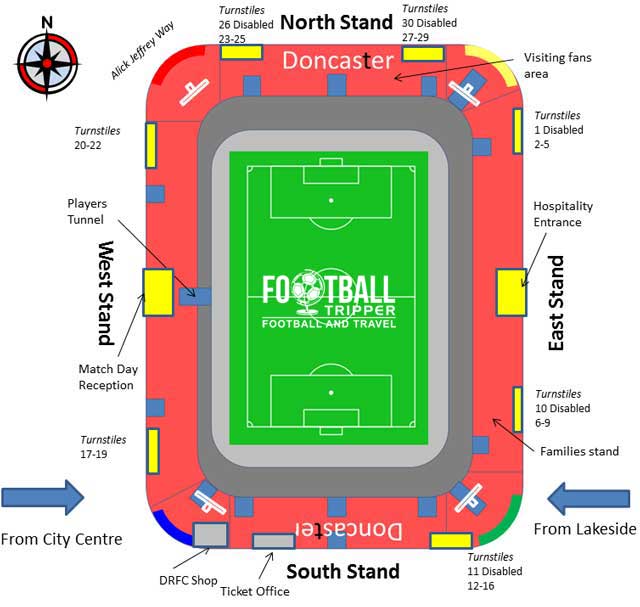 Each of the four stands at the Keepmoat Stadium invariably have sponsorship names but are usually referred to in relation to the compass: North, East, South and West.

Away fans are allocated the entirety of the North Stand for Doncaster FC matches, and if demand exceeds the 3,344 or so places within the goal-end, a small number of seats from the East Stand are then made available to traveling supporters.

Although not to everyone’s taste, The Keepmoat stadium for better or for worse, is the blueprint of the modern stadium and I suspect that many a lower league side are envious of the new and facilities.

Fully-enclosed, the noise travels well in the stadium, and the architectural design ensures that troublesome support beams remain a problem of the past.

We haven’t had any reports of the seats being uncomfortable or tight on leg room, so we can only assume that the match day experience is generally comparable to other teams in the division.

No matter how you make the journey to the Keepmoat Stadium you will encounter a number of decent pubs.

From the train station it will take you less than 10 minutes to make your way into the centre of town where you will find the likes of the The Old Angel and Cask Corner which both specialise in real ale.

Once you are within the retail park (either from walking/driving/coach) there are places to drink either side of the stadium with The Lakeside Beefeater towards the south often popular with away fans.

North of the ground there is a Cheswold Lodge Brewers Fayre Pub as well as a a large Brewsters chain.

At the stadium itself there is a bar which normally permits a small number of away fans to drink with the home faithful before the match.

Like all club-owned facilities it does get busy on matchdays but there is an efficient queuing system and the fact that it doesn’t sell food also helps speed things up somewhat.

From the train station you are essentially in town meaning that there are numerous quick and dirty options such as McDonald’s, Greggs and Sainsburys.

Doncaster Rovers have a club shop at the Community Stadium as well as their own official online site known as the  Rovers Clubshop. The opening times for store at the ground are as follows:

It doesn’t appear as if Doncaster Rovers FC currently offer fans the chance to undertake a stadium tour of Keepmoat Stadium.

How to buy Doncaster Rovers Tickets

You can purchase tickets to see Doncaster Rovers via the usual channels including phone (01302 762576), in person at the ticket office at the stadium or online at the club’s Keepmoat Stadium Online Ticketing page.

The club have reintroduced category C matches for the upcoming season and for the third season in a row are continuing the policy of a “quid-a-kid” within the DCLT family area.

Ticket prices for League One are set based on the category of the game and not where you sit in the stadium which makes prices to see Donacaster very transparent.

How to get to Keepmoat Stadium

Where is Keepmoat Stadium?

The Keepmoat stadium is located in the Lakeside area of Doncaster, approximately 1.5 miles out of town south-eastwards from the city centre within a retail park.

Doncaster FC’s Keepmoat stadium has a generous on site car park of approximately 1,000 spaces at a reasonably price of just £5 per vehicle.

Disabled fans are advised to reserve a space in advance by phoning the club on 01302 762576 as parking operates on a first come first serve basis and despite the size of the stadium complex, spaces are prone to running out.

Doncaster Railway Station is located 1.6 miles north west of the Keepmoat Stadium, with a walking time of approximately 30-35 minutes for the average fan.

Walking instructions are something like: head south on Trafford Way across the first roundabout keeping left until you reach the second roundabout known as “Sidings”.

Again, travel straight across onto White Rose Way and follow this as it snakes south, passing yet another roundabout and then turning left onto Carriage Drive. Follow this road until you get to Stadium Way.

South of the ground within Lakeside Village Outlet Shopping centre there are three hotel choices in the form of Premier Inn, Travelodge and the more corporate/business orientated Park Inn.

Located less than 5 minutes on Stadium way these are probably your best options, although that’s not to say that there are no accommodation options in Doncaster town centre.

Close to the station there is The Danum Hotel and The Regent.

Who plays at Keepmoat Stadium?

What is the capacity of Keepmoat Stadium?

As of 2023 Keepmoat Stadium has an official seating capacity of 15,231 for Football matches.

When was Keepmoat Stadium opened?

What is the postcode for Keepmoat Stadium?

The postcode for Keepmoat Stadium is DN4 7JW.

Covid Restrictions may be in place when you visit Keepmoat Stadium in 2023. Please visit the official website of Doncaster Rovers for full information on changes due to the Coronavirus.