Expanded in both 2001 and 2006, the 32,702 capacity stadium is thought to be the oldest in the world to be still hosting professional football matches today.

The ground at Bramall Lane held its first football match on 29th December 1862, giving it the distinction of being the oldest stadium in the world today which still hosts professional football matches.

Played between Sheffield F.C and Hallam F.C, it wasn’t until 1889 that Sheffield United would form and become the permanent residents at the Lane.

Before being used for football, the land on Bramall Lane was originally used as a cricket field as the out of town location meant that the air was comparatively smoke free.

It wasn’t until the 1970s that the ground would be converted solely to a football pitch, with Yorkshire’s Cricket Team playing their last test match there against Lancashire between the 4 and 7th August 1973.

Before the construction of England’s national stadium, the city of Sheffield hosted many important fixtures, and on 14th October 1878 over 20,000 fans witnessed the world’s first ever floodlight match.

The tragic events of Hillsborough were felt greatly throughout the city of Sheffield, and after the publication of the Taylor Report, Bramall Lane converted to all-seating by the start of the 1994 season.

By 2006, the stadium had became fully-enclosed after the corner between Cherry Street and Bramall Lane was filled in with seats.

Very much a modern stadium, The Blades have continued to explore the possibility of further renovations and to make the most of the prime city location.

Attempting to piggy-back on to any potential funding should England host the 2018 World Cup, there were plans to expand Bramall Lane to 44,000 for the tournament, but after the bid was unsuccessful, expansion is now dependent on the club returning to the Premier League.

Below is a seating plan of Sheffield United's Bramall Lane: 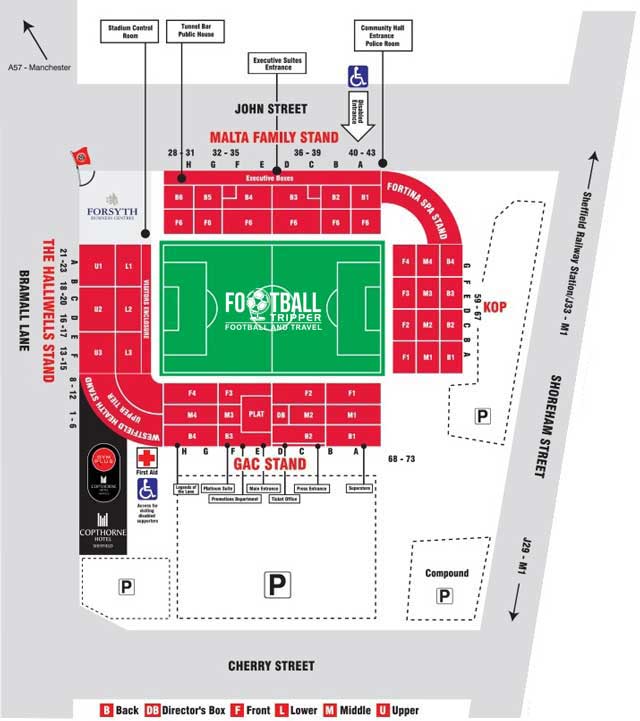 Visiting supporters to Sheffield United are based within the Bramall Lane Stand which occupies the space behind the goal towards the westernmost part of the ground.

Known as the Halliwells Stand, the standard allocation is around 3,000 tickets.

Split across two-tiers, the upper tier is usually reserved for away fans. Bramall Lane is famous for being a “proper” stadium with intimate views throughout, with the Halliwells Stand free from pillars unlike the opposite Kennedy’s Kop.

As is the trend these days fans are permitted into the ground via electronic turnstiles, with tickets available to purchase on the day of the match from two little booths near to the away entrance.

The boozers dotted immediately around Bramall Lane such as the 1855 Bar and Railway Hotel are generally reserved for home supporters, with away fans usually forced to walk slightly further on.

The Weatherspoons owned Sheaf Island next to Waitrose is usually a popular choice for the travelling contingent.

For those coming in from Sheffield Station there a handful of pubs less than 10 minutes away which are worth checking out, starting with the Globe which is routinely recommended by away fans.

Offering a wide range of real ale and classic pub food, there is a light-police presence on matchdays to ensure proceedings go smoothly and that everyone has a safe and enjoyable day out.

Along Bramall Lane itself and the surrounding streets there aren’t many places to eat, with the main parade of restaurants located one block west on the busier London Road.

Here you will find everything ranging from a Sainsburys to Amigos Mexican Kitchen with plenty of Kebab & Chip Shops thrown in for good measure.

Inside the station is a Burger King and 10 minutes south there is a competing McDonalds for those who like the familiar.

The club store at Bramall lane is known as the Superstore, and with the exception of the online store, SUFC Direct, it is the best possible place to purchase merchandise of the blades.

The opening times for the shop are as follows:

It doesn’t look like Sheffield United currently offer a stadium tour of Bramall Lane. If this changes we’ll be sure to update this section.

How to buy Sheffield United Tickets

Tickets to see Sheffield Utd play at home can be purchased via the usual channels: in person from the ticket office located in the south stand (open weekdays 9.00 am – 5.00 pm), via telephone (0871 995 1889) and on the internet.

You can either choose to have them delivered to your home address via post or collect them before kick-off on matchdays, with the club encouraging fans to book in advance in order to get the best possible deal.

Note: Purchasing tickets on the day of the match carries a £2.00 surcharge.

How to get to Bramall Lane

Where is Bramall Lane?

The Blades stadium takes its name from the road it is located on, Bramall Lane, and it is approximately 1 mile south of Sheffield city centre near to the area of Highfield.

Bramall Lane Stadium’s address for satnav is as follows:

Will update as soon we know!

Sheffield railway station is located less than 1 mile north-east from Bramall Lane with an approximate walking time of around 15 minutes for the average fan.

Upon exiting the station turn left and head on to Shoreham Street past the Showroom Cinema as the road splits in two. Proceed along this road sticking to it even as it crosses the busy St Mary’s Road A61. Once you have crossed this, follow the road southwards and then turn right at the roundabout on John Street to access the stadium.

The closest hotel to the ground is the Copthorne Hotel which is situated at the stadium itself with the remaining accommodation choices back towards Sheffield city centrer.  The Premier Inn just beyond St Mary’s Gate acts as a good bridge between the ground and the city centre with the Premier Inn Sheffield slightly further along.  The Novotel or Jurys Inn are the two options closest to the train station.

Who plays at Bramall Lane?

What is the capacity of Bramall Lane?

As of 2022 Bramall Lane has an official seating capacity of 32,050 for Football matches.

When was Bramall Lane opened?

What is the postcode for Bramall Lane?

The postcode for Bramall Lane is S2 4SU.

Covid Restrictions may be in place when you visit Bramall Lane in 2022. Please visit the official website of Sheffield United for full information on changes due to the Coronavirus.