Craven Cottage in West London is home to Fulham F.C and has been the club’s stadium since 1896, with a current capacity of 25,700.

The ground is based on the picturesque banks of the River Thames a short distance away from Bishop’s Park.

Before settling into Craven Cottage in 1896, Fulham lead something of a nomadic existence having previously played their home fixtures at over 10 different venues around London.

Second only to rivals Queens Park Rangers in terms of venues used, Fulham would later ground share Loftus Road with The Hoops between 2002-2004 as Craven Cottage was converted to all-seating.

Previously a Royal Hunting Lodge, the site of the pitch located next to Bishop’s Park initially consisted of a dense layer of trees and overgrowth. Cash-strapped at the time, The Cottagers enlisted the help of the owners of the ground to clear the forest in exchange for a proportion of future gate receipts.

This delayed Fulham’s move into their new stadium for 2 years which gives an indication of the size of the task at hand.

After spending a decade at the site, Fulham received concerns from London County Council about the safety of the ground. The Cottagers responded by emerging Scottish Architect Archibald Leitch who had just completed Ranger’s Ibrox Stadium to much fanfare.

Costing £15,000 which at the time was a record figure, the stand on Stevenage Road and the adjacent Pavillion (The Cottage) both remain intact to this day and are now Grade II listed buildings.

Craven Cottage peaked in size just before the Second World War, with a record attendance set when 49,335 supporters crammed into the ground to see Fulham take on Millwall.

After many fans came to watch the game after the one at Stamford Bridge was cancelled, it can perhaps be regarded as a slight anomaly, however it does give an indication of the size of the ground at the time.

The current format of Fulham’s ground was the result of the Taylor Report in 1990, although the conversion to all-seater was a very slow process. When Fulham entered the Premier League for the first time in the 2001-2002 season, the ground remarkably still had terracing.

Unacceptable for a top-flight club, this lead some fans to worry about the long term future of Fulham, although the ground was eventually renovated whilst the club temporarily relocated to Loftus Road.

Below is a seating plan of Fulham's Craven Cottage: 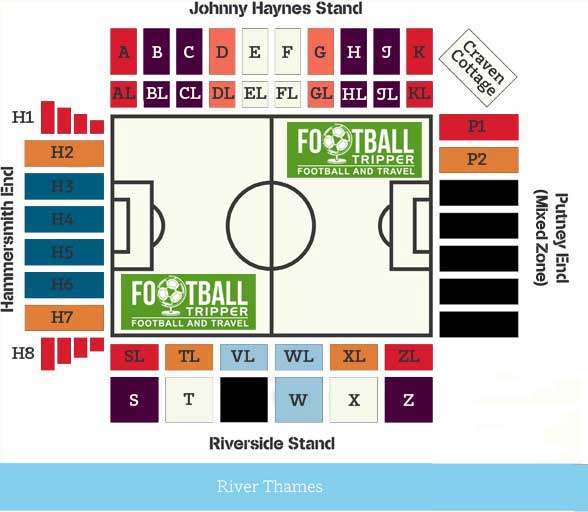 Visiting supporters to Craven Cottage are housed within the Putney End Stand which runs for the width of the pitch on the southern side.

Sandwiched between Bishop’s Park and the pitch, the standard allocation for away fans is around 3,000 seats and this takes up approximately one-half of the stand. The remaining half is occupied by neutral supporters which is slightly contentious.

Most of Craven Cottage’s charm comes from the fact that it’s very much an old-school stadium with steep-terraces and close proximity to the pitch.

The famous “cottage” where the player’s changing rooms are located also lies next to the Putney End Stand to the east.

Some of this quaint allure is offset ever so slightly by obstructive support beams which inhibit the views from some sections of the ground, including the the upper part of the away end, but it’s not really much of an issue.

One of the best things about Fulham’s ground, and most memorable features for travelling supporters is the outdoor concourse which overlooks The River Thames. Particularly pleasant on a Summer Day, there aren’t many better natural companions to have a pint with when the weather is nice.

Depending on which way you’re making your journey to the Cottage you will likely encounter 1-2 pubs en-route, although they become less frequent as you get closer to the ground.

From the closest tube station, Putney Bridge, there is both the Eight Bells and The Golden Lion nearby which will provide all the fortitude you need for your excursion through Bishop’s Park.

If you are walking down along the long Fulham Palace Road from the much more built up area of Hammersmith, there are a number of pubs you could easily stop at.

For a good contrast of new and old you might want to check out the Victorian Old Suffolk Punch followed by the Southern Belle “speakeasy-style bar”.

Of course, the best place to drink of all is at the stadium itself with the exterior concourse of the Riverside stand overlooking the Thames. Less choice for beers, but much better views and atmosphere.

There aren’t too many standout options around either tube station with Fishers Fish & Chips on the Putney Bridge side of Fulham Palace Road being one possible option.

The Hammersmith tube station is essentially built into a shopping centre so there are a lot of “generic” options including McDonalds, Subway and Starbucks.

The Fulham store is located in the Johnny Haynes Stand along Stevenage Road, and it is the best possible place to purchase merchandise excluding the club’s online store known as Fulham Direct.

Opening times are as follows:

Fulham offers fans of the club a decent range of packages which allow them to see Craven Cottage up close and personal including as standard  tours available by pre-booking, group tours, tour and lunch, and even “my first matchday” experience for the young Cottager in waiting.

More details are available straight from the official website.

How to buy Fulham Tickets

Tickets are available on the club website (See useful links), but have to be booked well ahead of time to avoid disappointment.

How to get to Craven Cottage

Where is Craven Cottage?

As you can see from the map below, Craven Cottage is located right on the banks of the River Thames, within the South West London borough of Hammersmith and Fulham.

Driving is not recommended in London, and as the ground is surrounded by Residential areas, on matchdays you might as well not bother.

Even if you do find a space around the ground there is a one-hour maximum stay policy for non-residential visitors which unless you’re only going to stay for one half of the match, isn’t feasible in the slightest.

London is particularly well equipped when it comes to Train stations. It is accessible from pretty much all of the UK, with the more popular stations being:

If you’re an international visitor who is visiting then you’re spoilt for choice for airports.

Even more so if you opt to stay in West London, where Craven Cottage is located.

Who plays at Craven Cottage?

English side Fulham play their home matches at Craven Cottage.

What is the capacity of Craven Cottage?

As of 2023 Craven Cottage has an official seating capacity of 19,359 for Football matches.

When was Craven Cottage opened?

Craven Cottage officially opened in 1896 and is home to Fulham

What is the postcode for Craven Cottage?

The postcode for Craven Cottage is SQ5 6HH.

Covid Restrictions may be in place when you visit Craven Cottage in 2023. Please visit the official website of Fulham for full information on changes due to the Coronavirus.