Regarded as the club’s spiritual home, the new plough lane sits approximately 180 metres east of the original ground which was the home of Wimbledon FC between 1912 and 1991.

A.F.C Wimbledon previously played their home fixtures at Kingsmeadow Stadium which the club purchased from Kingstonian F.C in 2003, and sublet to the former owners on a renewable 25 year sublease.

The ground is located within the Royal Borough of Kingston Upon Thames and whilst this is much closer to Wimbledon’s spiritual home than Milton Keynes, the clubs board and fans wish to eventually return to a stadium in their proper home – the Borough of Merton.

With the original site of Plough Lane now turned into a housing development with buildings named after former players, many believed a move back to Merton was nothing more than a pipe dream.

However with the assistance of Gaillard Homes, the Dons put together a multi-million pound proposal to replace the site of the Wimbledon Greyhound track with a modern footballing venue complete with residential housing and local amenities.

Eventually approved by Merton Council after many trials and tribulations, AFC Wimbledon returned to the home of the original Wimbledon FC after almost 30 years.

The first game was live-streamed to fans due to Coronavirus restrictions and saw The Dons take on Doncaster Rovers in an entertaining 2-2 draw.

The ground was designed to be expandable up to a capacity of 20,000 however this is highly unfeasible for the forseeable future.

Below is a seating plan of AFC Wimbledon's Plough Lane: 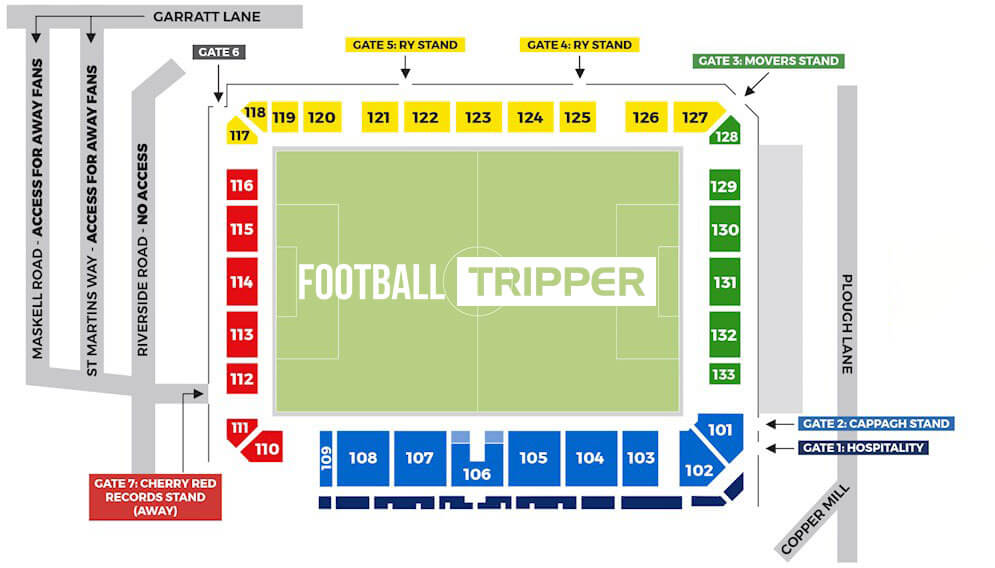 Plough Lane is comprised of four connected stands in a modern stadium arrangment:

Away fans are housed in the North Stand which has a capacity of 1,465.

The entrance is Gate 7 which is accessible via via St Martin’s Way and Maskell Road.

There is a large designated area for drinking at the stadium which many fans will choose to take advantage of.

There are food options available around the stadium and within the concourse of each stand.

Due to Covid-19, a cashless system is currently in place which means you will have to pay with cards and contactless devices.

The AFC Wimbledon club shop at Plough Lane stadium is open Monday to Friday from 10.00 am – 4.00 pm.

It is usually closed on Saturdays and Sundays, unless of course there is a match on.

There doesn’t appear to be plans to do stadium tours to the general public at this moment in time, however this may change in the future.

If you attend a match and sit within the main (west) stand you will get a really good feel for the ground and it’s inner layout.

How to buy AFC Wimbledon Tickets

How to get to Plough Lane

Where is Plough Lane?

Plough Lane Stadium is located in the town of Wimbledon within the southwest London borough of Merton.

There is no parking on site, and matchday parking restrictions in place around the stadium, so it is highly advisable that you take public transport instead.

There are a handful of overground train stations which surround Plough lane including Haydons Road, Earsfield and the slightly further away Wimbledon Station.

The nearest tube stations are as follows:

London is served by numerous airports with the two largest being Heathrow and Gatwick, as well the smaller City of London Airport.

For budget flights there is also London Stanstead Aiport in Essex, and Luton which is north of the city in Hertfordshire.

Who plays at Plough Lane?

What is the capacity of Plough Lane?

As of 2023 Plough Lane has an official seating capacity of 9,215 for Football matches.

When was Plough Lane opened?

What is the postcode for Plough Lane?

The postcode for Plough Lane is SW17 0NR.

Covid Restrictions may be in place when you visit Plough Lane in 2023. Please visit the official website of AFC Wimbledon for full information on changes due to the Coronavirus.