The Pirelli Stadium is the home ground of the East Staffordshire based team, Burton Albion F.C, who play football out of Burton Upon Trent.

Constructed in 2005 at an estimated cost of £7.2 million, the 6,912 capacity ground is named after the Italian tyre manufacturer Pirelli who donated the land in exchange for naming rights.

Plans to replace Burton Albion’s former home Eton Park date back as early as July 2003 when the club realised that their then stadium didn’t match the team’s Football League aspirations and would fail to meet safety standards if there ever was a promotion.

Two years later after jumping through the requisite hoops the ground opened on the 14th November 2005 with a friendly match against Manchester United.

The opening ceremony’s special guests including Sir Alex Ferguson, The managing director of Pirelli and Barbara Clough the widow of legendary manager Nottingham Forest Brian Clough and mother of at the time Brewer’s manager, Nigel Clough.

Brewers defeated the young United side 2-1 in what marked an excellent baptism for the new stadium although the first competitive fixture in the Football Conference only amounted to a 1-1 draw against Grays Athletic.

Whether or not it was fate or coincide, the Brewer’s happened to draw Manchester United in the third round of the FA Cup that season and it was at this exciting 0-0 draw that the club set the record attendance of 6,200.

Upon gaining promotion to the football league in the 2008-2009 season, the club expanded the ground by 712 places in time for the inaugural League Two season.

This represented an increase in capacity just over 10% and as a result the club agreed to fund the extension of a new pelican crossing at the request of the local transport authority.

Today, the Pirelli Stadium is one of the most successful examples of a smaller club constructing their own stadium on a budget, and the ground even inspired Morecambe’s Globe Arena which is testament to what Burton have accomplished.

Below is a seating plan of Burton Albion's Pirelli Stadium: 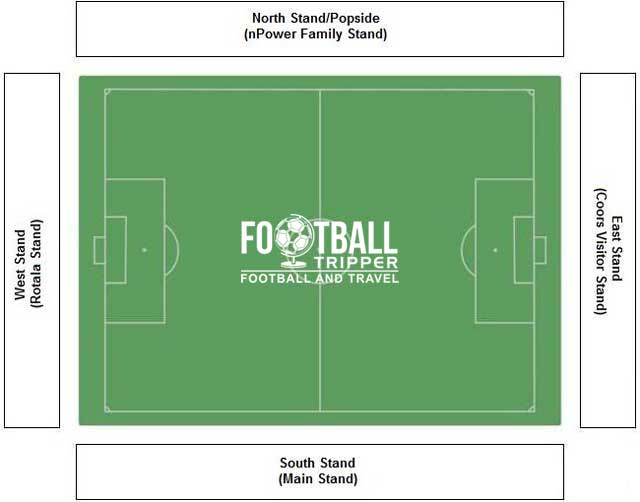 The four stands at the Pirelli Stadium are as follows:  nPower Family Stand (North), Coors Visitor Stand (East) where away fans are located, Main Stand (South) which is all seating and the Rotala Stand (West).

Away fans are primarily housed in the Coors East Stand behind the goal which is capable of accommodating a fraction over 1,400 fans.

In addition to this uncovered stand, additional space for 400 fans is also made available within the larger, and all-seated Main Stand.

As one of the newer stadiums in the lower leagues it is definitely worth visiting, as it evidence for other teams of how a new purpose built stadium can be achieved on a budget and without comprising on the matchday experience.

Burton Albion certainly aren’t known as The Brewers for nothing with no less than four bars located within the stands around the ground in addition to a bevy of pubs on route to The Pirelli.

Starting from the station there is the Roebuck Ale House to your right and slightly further down to the right of station street is the Devonshire Arms which also has a decent selection of ales and reasonable range of options on the food menu.

If you want a pub close to the stadium then try “The Beech Inn” which is approximately 10 minutes away along the A5121 on Derby Road with the other option being the Great Northern Pub located on Wetmore Road.

Across the road from The Beech Inn there is a McDonalds which might be to the taste of some fans with the other options located within the stadium.

Inside the concourses you will find the likes of burgers, Pukka pies and hotdogs with chip butteies served in crusty bread also pretty popular at the ground.

Burton and Albion club shop is located next to the main reception and is the best place to purchase all your Brewers Merchandise, with the exception of the official e-store.

There is no official word on opening times for weekdays evening matches but more likely than not it will be open for at least 1 hour before kick-off if every other team’s shops are anything to go by.

It doesn’t appear as if Burton Albion FC currently offer fans the chance to undertake a stadium tour of Pirelli Stadium.

How to buy Burton Albion Tickets

Tickets to see the Brewers play at home can either be purchased by visiting the ticket booth/club shop in person or by contacting the ticket office by phone 01283 565938 or email [email protected] Please note that sadly there are currently no online ticket sales.

How to get to Pirelli Stadium

Where is Pirelli Stadium?

The Pirelli Stadium is located in North Burton along the Derby Road (A5121) near to the tyre manufacturers factory approximately 1 mile north-east of Burton upon Trent.

The stadium’s satnav address is as follows:

The Pirelli has a car park large enough for 400 vehicles, with overflow parking located at the nearby Rykneld Trading Estate which is the first exit at the roundabout before turning right onto Princess way.

Burton Railway Station is located less than 1 mile away from Burton Albion’s stadium, and less than half a mile from the centre of town on Borough Road.

With regular services to and from the North (Derby and Nottingham) and South (Birmingham), Burton is well connected to the rest of the UK, and makes for an accessible football trip.

Walking instructions to the Pirelli Stadium are as follows and should take no more than 25 minutes:

There are a few hotels along the A5121 which runs parallel to the railway tracks to the north-east of the stadium.

Northbound there is the Beech Hotel and back towards the town there is a Travelodge, The Delter Hotel near the station and the Crescent Hotel.

Who plays at Pirelli Stadium?

What is the capacity of Pirelli Stadium?

As of 2022 Pirelli Stadium has an official seating capacity of 6,912 for Football matches.

When was Pirelli Stadium opened?

What is the postcode for Pirelli Stadium?

The postcode for Pirelli Stadium is DE13 0BH.

Covid Restrictions may be in place when you visit Pirelli Stadium in 2022. Please visit the official website of Burton Albion for full information on changes due to the Coronavirus.