Meadow Lane Stadium often just abbreviated to just Meadow Lane by fans, is a purpose built football ground located in the city of Nottingham in the East Midlands Region. It is home to local team Notts County who are thought to be the oldest professional football club in the World.

Although regarded as the oldest professional football club in the world, Notts County unfortunately don’t have the honour of having the oldest current stadium in the world, as the club first moved into Meadow Lane on 3rd September 1910 – 48 years after forming.

The inaugural fixture at Meadow Lane was held against city rivals Nottingham Forest, and it attracted a crowd of an estimated 27,000 supporters. Previously The Magpies had their played  matches south of the River Trent at the site of Nottinghamhire County Cricket Club. However as tenants Notts County were unable to secure optimal playing times and thus the Football league essentially forced the club to change venues.

Moving north of the River Trent, the new stadium sustained bomb damage during the Second World War, and developed at a relatively slow pace throughout the early half of the 20th century. At one stage the ground became three-sided after the The Meadow Lane End was demolished and replaced by a club building in 1978.

The publication of the Taylor Report in 1990 following the high-profile stadium disasters of Bradford City and Hillsborough forced Notts County to completely modernise Meadow Lane during the 1990s. Although plans were drawn up before legislation came into effect, the increased spotlight on and concern for spectator safety galvanized the club into taking immediate action.

Constructed over two phases, The Meadow Lane, County Road Stand and Spion Kop were all demolished at the end of the 1991-1992 season, and gradually replaced with all-seater equivalents. The second phase of the modern stadium saw The Main Stand replaced two years later during the Summer of 1994, giving Meadow Lane its current form and capacity of 20,211.

Below is a seating plan of Notts County's Meadow Lane: 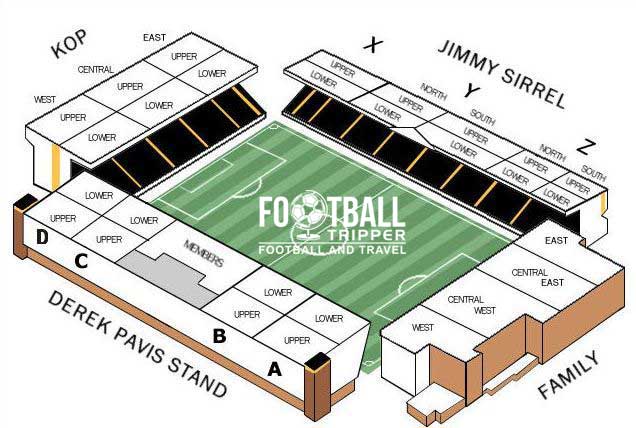 Visiting supporters at Meadow Lane are allocated seats within the Jimmy Sirrel Stand which sits opposite the main stand along the north-east side of the pitch. Completely rebuilt in the 1990s, the stand is a modern construction consisting of a single-tier of seats although it has a slightly retro appearance with the existence of the gable on top.

The lack of support beams for the roof allow fans to enjoy uninterrupted views of Notts County’s pitch, with the concourse and facilities inside the stand reportedly to be of satisfactory quality.

With an allocation of around 1,300 places in the Sirrel Stand, it is inevitably shared with some home supporters who often give as good as they get. Prior to this, the away fans were housed in the Kop Stand which drew criticism from Magpies fans who viewed it as an important place where the more vocal fans historically congregated.

At the stadium there is the Meadow Lane Sports Bar which is located within the Haydn Green Family Stand and is usually open for at least 2 hours before kick-off.

Like all stadium located pubs it can get busy on matchday with the decision to permit away fans to enter usually taken on a match by match basis. Usually a small number of away fans are more than welcome but it only takes a few idiots to ruin it for everyone.

If you are coming from Nottingham Train station you are pretty close to the centre of the city meaning that you have a lot of dining options, too much to list here. On route to Meadow Lane you can take a slight diversion past the ground up A6011 to reach a roundabout which is home to a KFC, and Burger King although it hardly seems worth the journey of around 20 minutes when you can get a pie or equivalent at the stadium.

Notts County have a club shop at Meadow Lane in addition to their own official online site, The Magpie Store. The opening times for the store at the ground are as follows:

For more general information, to confirm opening hours or to check availability of stock feel free to send an email to [email protected] or phone the store on 0115 9557 203.

It doesn’t appear as if Notts County FC currently offer fans the chance to undertake a stadium tour of Meadow Lane. If this changes, we’ll be sure to update this section.

How to buy Notts County Tickets

Tickets to see Notts County play at home can in the expected manners: via telephone (0115 955 7210), via email ([email protected]), in person from the stadium ticket office (open Monday – Friday 9.00 am – 5.00 pm) and on the internet from the club’s online ticket office, Notts County Direct.

How to get to Meadow Lane

Where is Meadow Lane?

Meadow Lane Stadium is located in on the Northern Bank of the River Trent less than 300 metres from cross city rivals, Nottingham Forest’s city ground.

Meadow Lane Stadium’s address for satnav is as follows:

There are three car parks at the stadium (Derek Pavis, Iremonger Road and Meadow Lane) which operate on a first come first served basis with the exception of spaces for those who hold a parking pass for the season.

Roads around the vicinity of the ground are subject to parking prohibitions come the day of the match in order to ensure the safety of spectators so don’t assume that you can park on-road.

As a back up to the club run parking there are spaces at the Old Cattle Market directly behind the away turnstiles to the North of Meadow Lane.

Meadow Lane is located 0.8 miles from Nottingham Railway Station with the journey by foot on average taking just under 20 minutes. Located in the Midlands the city is very accessible from around the United Kingdom with the station served by no less than three train operators: East Midlands, CrossCountry and Northern Rail.

To walk there by foot exit the station and join London Road by either turning right onto Station Street or left on Queens Road. From this main road proceed southwards along the canal and then turn left across the bridge on Cattle Market Road followed by the first right down the cool sounding Iremonger Road.

When it comes to hotels after seeing Notts County in action you essentially have a choice of travelling back towards Nottingham City Centre, or travelling south across the River Trent. The closest hotels southwards are The Gallery and Grantham Hotels with the Castle Hotel also located on Radcliffe Road but slightly further away.

Within the city centre there are the usual suspects such as Premier Inn, Travelodge, Ibis and the Jurys Inn Nottingham which is located right next door to the train station.

Who plays at Meadow Lane?

What is the capacity of Meadow Lane?

As of 2022 Meadow Lane has an official seating capacity of 20,211 for Football matches.

When was Meadow Lane opened?

What is the postcode for Meadow Lane?

The postcode for Meadow Lane is NG2 3HJ.

Covid Restrictions may be in place when you visit Meadow Lane in 2022. Please visit the official website of Notts County for full information on changes due to the Coronavirus.