The Hive Stadium first opened in 2013, and had been home to Barnet Football Club ever since. Capable of accommodating 5,634 supporters including 3,434 of those seated, The Hive is a described as being “demountable” which means it could be relocated or just as easily expanded in the coming years.

The Hive Stadium has been home to Barnet since July 2013 after the club were unable to resolve an ongoing rental dispute with Barnet London Borough Council. Home to Bees for over 100 years since 1907, the decision to move out of Underhill Stadium was not taken lightly however the dated facilities were deemed to be responsible for declining matchday revenues.

Construction on The Hive began back in 2003 when the stadium on Prince Edward Playing Fields was originally envisioned as the new home of Wealdstone FC. Wealdstone’s investors unfortunately went into liquidation, and Barnet took over the project after Harrow Borough put the site up for tender.

The record attendance to date was set against Gateshead on 25th April 2015 when 5,233 supporters saw Barnet secure promotion back to League Two with a 2-0 victory. Officially 57 spectators over capacity, the terrace regulations were relaxed slightly due to the demand for the club’s most important match of the season.

Former England and Russia Manager Fabio Capello opened The Hive training ground and centre in 2009, and since then numerous facilities have been built around the main stadium, turning it into a sports complex.

The lease on the Hive is 125 years with a ten year agreement for playing league football. The club have no plans to return to the London Borough of Barnet and the plan is to slowly upgrade the Hive stadium to an 8-10,000 capacity arena over the next few years. Whilst the West stand is demountable the rest of the stadium is not and there has never been an intention to remove stands at a later date.

View of The Hive

Below is a seating plan of Barnet FC's The Hive: 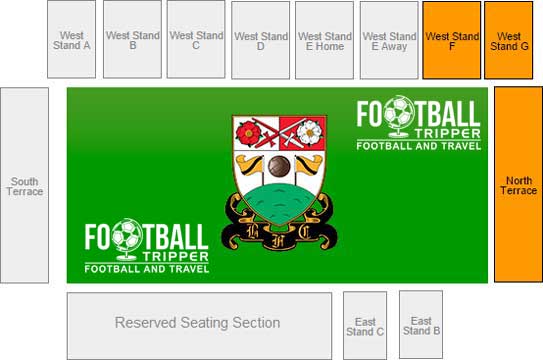 The Hive Stadium is comprised of four stands:

The Hive Away End

Away fans are predominantly housed within the North Terrace however there is the option of seating within Sections F and G of the West Stand. Around 800 tickets are usually allocated across each stand which makes the maximum number of visitors just over 1,600 per match.

If you’re team has a small travelling contingent then you will likely just be housed within West Stand which means you will be seated for the match.

As The Hive’s building materials could almost be described as being “prefabricated”, each stand can be manipulated physically to make quite a bit of noise. Fans often stomp their feet and those at the back can bang the metal panels to create driving rhythms when the chants start!

Both sets of supporters have their own designated bars at the stadium located within the back of the main stand. There are also a handful of pubs en-route to The Hive which can be frequented for a quick pit stop before you get to the ground.

Official Barnet merchandise can either be purchased online from the online club shop or at the physical one located at The Hive stadium.

Note: We’re still awaiting confirmation that the club shop does open at these times!

Whilst there’s no public stadium tour I’m sure if you get there early a kind steward may be willing to quickly take you round the stands.

How to buy Barnet FC Tickets

Tickets to see Barnet can be purchased online from the official ticket seller, via the telephone (020 8381 3800) or in person at the box office either in the weeks leading up to the match or just before kick-off.

*Concessions are supporters aged 65 years and over & under the age of 21.

How to get to The Hive

Where is The Hive?

Like all London Stadiums the best route to take will depend on your starting point – there is no universal best method so be flexible.

The 500 parking spaces at the ground cost just £5.00 on matchdays and operate on a “first-come, first-serve basis”. On non-matchdays you can park for just a single pound – providing that you are visiting The Hive of course.

Hotels Near The Hive

East of the ground there is Madonna Halley’s Hotel on Whitechurch Lane, and along Edgware High Street there is a Premier Inn. Other than those two there aren’t really any hotels within close proximity to The Hive which means you might as well extend your accommodation catchment area to other parts of London.

Who plays at The Hive?

English side Barnet FC play their home matches at The Hive.

What is the capacity of The Hive?

As of 2023 The Hive has an official seating capacity of 5,176 for Football matches.

When was The Hive opened?

What is the postcode for The Hive?

The postcode for The Hive is HA8 6AG.

Covid Restrictions may be in place when you visit The Hive in 2023. Please visit the official website of Barnet FC for full information on changes due to the Coronavirus.