Broadhall Way or The Lamex Stadium is a purpose built football stadium located in the Hertfordshire city of Stevenage.

Broadhall way has invariably been home to a Stevenage based football side since the 1960s with now dissolved clubs Stevenage Town and Stevenage Athletic originally using the ground for their home fixtures.

With the formation of Stevenage Borough in 1976, and the ground remaining unused since the bankruptcy of the former teams, it marriage between the two entities was a completely a natural fit.

In 1980 the local council purchased the stadium and allowed The Boro to become its sole tenant. It served Stevenage FC well up until the club’s promotion to the Football League in 1996, when the facilities became inadequate for the more professional level of football.

With the 1995-1996 Conference National season in vain as the club were unable to proceed to the higher tier due to the quality of their stadium , the club invested large sums of money into ensuring this scenario would never happen again.

The club immediately invested £600,000 in a new state-of-the art stand, as well as other urgent upgrades.

In 2009 the club announced that stadiums official name would be changed from Broadhall Way to The Lamex Stadium following a reported seven figure sponsorship deal with Lamex Food Group.

The funding has been greatly welcomed as it has allowed the club to kick-on and host League football for the first time in the club’s history during the 2010-2011 season. 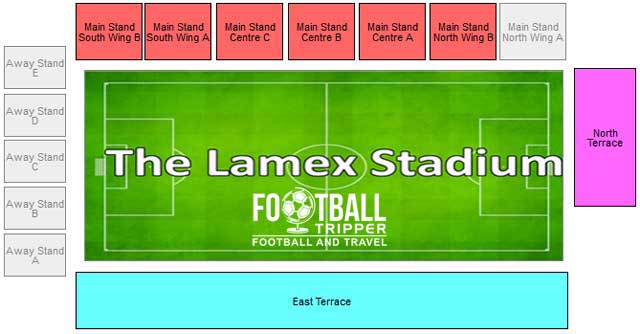 Stevenage’s ground consists of four stands: The North Terrace, The East Terrace, The South Stand and The Main Stand which is to the West.

Away fans are situated in the South Stand which is a goal-end, opposite the home supporters’ north-terrace.

Capable of welcoming up to 1,400 supporters, the south stand is a raised construction with perfect views of the pitch due to the modern roof design rendering support beams obsolete.

Accessible through Gates 17-19, the friendly atmosphere on matchdays make it one of the more popular away days in lower league football with both sets of fans capable of mingling over a pint before kick-off in the spacious club house with no hostility.

The only minor negatives are that there are a lack of sinks in the away toilets which means hands are cleaned with a sanitary dispenser, and the food kiosk sometimes feels too small for the number of fans in the concourse.

Both problems are naturally exacerbated at half-time.

At the stadium in the South-East corner there is the Broadhall Suite which opens at midday for Saturday 3.00 pm kick-offs and 5.00 pm for midweek games with Stevenage allowing both sets of fans to mingle over a pre-match pint, soft drink or bite to eat.

Suitable for families with Children welcome, there’s hot food available and numerous TV screens which invariably have either Sky Sports News or the live football which helps fans get into the mood for the footballing spectacle they’re about to witness.

Between Stevenage Station and Broadhall there is a large Wetherspoons known as The Standard Bearer with either the Best Western Roebuck Inn or The Our Mutual Friend pubs located 10 minutes or so east of the stadium popular with fans of real-ale.

All four stands are under new management since 2015 season with a decent selection of well priced munch including: baguettes, homemade pies, cheesy chips, burgers, and bacon bans from the local butchers.

The club also make a point of mentioning their 99% fat free Schmoo milkshakes but I can’t say that I’ve personally tried one.

Next to the railway station there are two adjacent retail parks known as Roaring Meg and Stevenage Leisure Park which have a plethora of fast food and restaurant choices e.g Harvester and Burger King.

Stevenage FC operate a club shop The Lamex located outside the main (west) stand next to the ticket office as well as their own official online e-store.

For more information, to confirm opening times or to check availability of the new kit feel free to send an email to [email protected] or phone the store on 01438 223223.

The shop is open after the full time whistle for a short while.

It doesn’t appear as if Stevenage FC currently offer fans the chance to undertake a stadium tour of Broadhall Way.

How to buy Stevenage Tickets

Tickets to see Boro can be purchased via the usual channels including telephone (01438 223223), email, in person at the stadium club shop (Opening times posted above) and online by visiting the Boro Tickets Page.

Please note that the above prices are “advanced” meaning not purchased on the day of the match. Match day tickets typically carry a £2 premium. Also family tickets are available for each stand for either 1 or 2 adults and 2 children at a reduced price.

How to get to Lamex Stadium

Located one mile from Stevenage railway station and town centre, the Lamex Stadium is located next to the woods known as Monk’s and Millenium.

The address for sat-nav is:

The club lays on free match day parking for 500 cars at the Fairlands Valley Car park just north of the ground with fans strongly discouraged against parking on the verges of grass on the A602 – unless you wish to receive parking tickets that is.

You can also park in nearby residential streets providing there is space as long as you are considerate and respectful of driveways.

Stevenage also advise fans against parking at the Roaring Meg Retail Park or at The Wickes car park on Saturday as parking is restricted to 90 minutes slots on match day.

Those who break the parking rule face a £100 fine. If you’re visiting midweek for an evening kick-off then you can rejoice, as the rules don’t come into effect until the weekends although please always check the relevant signage!

Stevenage Station is exactly 1.2 miles from The Lamex with the railway lines served by East Coast Main Line meaning regular services to both London (25 mintues from Kings Cross) and Northern towns (Peterborough 50 minutes).

One you have arrived you can either get a taxi or opt to make the journey on foot. This will likely take you around 20-25 minutes depending on your levels of fitness.

There’s actually a pretty decent choice of hotels for those looking to stay overnight whilst watching Stevenage Football Club in action.

Southwards on London Road there is the Best Western Roebuck Inn, northwards back towards town there is a Holiday Inn and Hotel Ibis and right next to the A1 (M) there is the Premier Inn for those looking to make a quick getaway the next day.

Who plays at Lamex Stadium?

English side Stevenage play their home matches at Lamex Stadium.

What is the capacity of Lamex Stadium?

As of 2023 Lamex Stadium has an official seating capacity of 7,800 for Football matches.

When was Lamex Stadium opened?

Lamex Stadium officially opened in 1961 and is home to Stevenage

What is the postcode for Lamex Stadium?

The postcode for Lamex Stadium is SG2 8RH.

Covid Restrictions may be in place when you visit Lamex Stadium in 2023. Please visit the official website of Stevenage for full information on changes due to the Coronavirus.