Sixfields Stadium is the 1994 built home ground of lower league team Northampton Town F.C. With an initial size of 7,653, the stadium is in the process of being renovated which will lead to an increased capacity of 8,900.

From the 2013-2014 season, the ground has also been used by Coventry City Football Club.

The stadium was supposed to be ready at the start of the 1994 – 1995 season but unexpected delays meant that The Cobblers had to play their opening fixtures at their former home, The County Ground.

In December 2003, just under a decade after the club moved into the ground, the club announced that they had secured a 150-year lease deal on the site from the local council.

The ground’s owners boldly proposed an ambitious new 15,000 capacity sports and retail complex, but this all but petered out in 2009 when independent consultations found the development would have an adverse effect on the prosperity of the town centre.

From July 2013, Coventry City FC agreed a ground share agreement for Sixfields on an initial basis of three seasons, but after resolving their dispute with the Ricoh Arena, the club vacated the ground in time for the 2015 League One season, leaving Northampton Town FC once again as the sole tenants.

Below is a seating plan of Northampton Town's Sixfields Stadium: 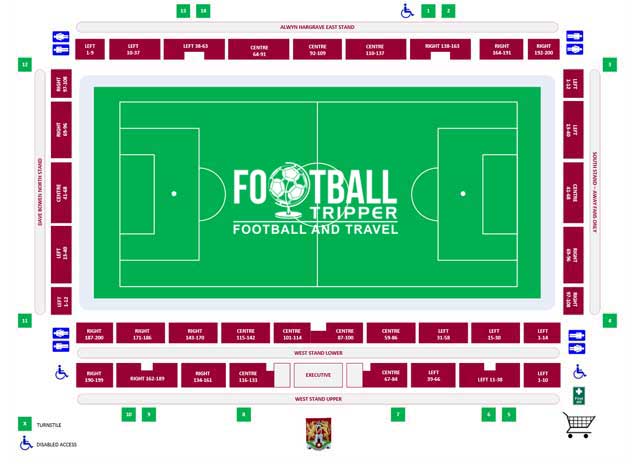 Visiting supporters are housed within the South Stand which is more or less identical to the opposite north section, known as The Dave Bowen Stand.

With a capacity of around 850 it is normally large enough for most traveling contingents but in the occasional case where larger numbers are expected, around 300 additional seats are provided by the Alwyn Hargrave Stand situated to the east.

Fans are required to purchase a ticket outside the ground before kick-off for most matches with no online ticket sales for away fans as far as we know.

The long winded process then requires you to also queue up at the turnstile afterwards to enter the stand which can be slightly frustrating, especially when some clubs allow you to pay at the gate!

Within the environs of the retail park itself there is just one “proper” pub known as the Sixfields Tavern. A family friendly sports bar, unfortunately for some, it is reserved for home supporters only, with bouncers ensuring no one with any visible away colours gets in.

As a result, the best option for away fans nearby to Sixfields is probably to grab a drink from one of the restaurant chains such as TGI Fridays.

Most of them also have fully licensed bars and are happy to admit away fans in moderate numbers, with some fans suggesting that the Tenpin Bowling Alley Bar is also a viable venue.

For those catching the train, there are a handful of pubs within Northampton Town Centre with The CAMRA listed Malt Shovel Tavern coming highly recommended for those in search of real ale.

This is located by turning left from the station on St Peter’s Way in the opposite direction of Sixfields.

Across the road there is also a Sainsbury’s supermarket which is also another decent option for the more health conscious football fan.

Northampton Town FC run a club shop at Community Stadium which compliments their own official online site, The Cobblers Shop.

The opening times for both the store and box office at the ground are as follows:

For more information, to confirm opening times or to check availability of the latest home shirt send an email to [email protected] or phone the store on 01604 683763.

It doesn’t appear as if Northampton FC currently offer fans the chance to undertake a stadium tour of Sixfields.

How to buy Northampton Town Tickets

Tickets to see The Cobblers in action can be purchased via the usual methods including telephone (01604 683777), email ([email protected]), in person at the Sixfield’s club shop (Opening hours listed above) and on the internet by visiting Northampton’s Online Ticket Office.

Please note that if you purchase your tickets on the day of the match you will end up paying £2 more for the privilege – whilst it’s not a staggering amount of money, it’s definitely worth point out that you can save by booking in advance.

All tickets for disabled supporters cost £14 with junior disabled fans receiving a 50% discount. One carer or companion is permitted into the stadium for free as part of this.

How to get to Sixfields Stadium

Where is Sixfields Stadium?

One of the benefits of being located out of town is undoubtedly that there is more room for car parks, and this is certainly true with Sixfields.

At the ground there are two large car parks which allow you to park for the hours before, during and after the match for a reasonable sum of £4.

Northampton Town Football Club have negotiated the use of the two car parks with the owners, English Partnerships, who have agreed that they can once again be used for upcoming season.

The North car park is tarmacked and usually fills up quicker and the south is a mixture of gravel and ground.

Northampton railway station is located in the city centre approximately 1.7 miles east of Sixfields Stadium with the walk to Westgate Industrial Estate likely to take anywhere between 30-40 minutes.

The most simple route is to follow the A4500 westbound as it becomes Weedon Road. After one mile and a half the stadium will appear on your left hand side.

You can also get a taxi from outside the station for anywhere between £10-15 pounds or the bus, with more details listed below.

The closest hotel to Sixfields is the Travelodge Northampton Way which is across the road from the stadium to the east, literally less than 300 metres away.

Besides this there are no other accommodation options located ear to Westgate Industrial state with the remaining options all being back towards the city centre such as Park Inn by Radisson, Plough Hotel and Travelodge.

Who plays at Sixfields Stadium?

What is the capacity of Sixfields Stadium?

As of 2023 Sixfields Stadium has an official seating capacity of 7,798 for Football matches.

When was Sixfields Stadium opened?

What is the postcode for Sixfields Stadium?

The postcode for Sixfields Stadium is NN5 5QA.

Covid Restrictions may be in place when you visit Sixfields Stadium in 2023. Please visit the official website of Northampton Town for full information on changes due to the Coronavirus.