Located in North Lincolnshire in north-east England, the 9,088 capacity purpose built football ground was constructed in 1988 at a reported cost of £2.5 million.

Glanford Park has been home to Scunthorpe United since 1988 after the club relocated from the Old Showground located on Doncaster Road within the centre of town.

Moving two years before the publication of the Taylor Report in 1990 which prohibited terracing, Scunthorpe were actually one of the first clubs in the modern era to move to a new purpose built football stadium.

Following on from the events of the Bradford City Stadium Fire in 1985, The Iron’s old stadium needed significant investment if it where to comply with newly introduced legislation regarding spectator safety.

Before the era of publicly funded grants in the 1990s, the ground was mostly privately funded, and the club looked to maximise their investment by relocating to an out of town location.

After generating a decent amount of by selling their plot of land to Safeway who built a supermarket, Scunthorpe eventually chose a site within the area of Glanford which technically fell outside of the administrative area of Scunthorpe.

After the local council were particularly cooperative and even provided a small amount of funding, the club announced that they would be naming the ground “Glanford Park”.

The relatively shoestring budget on which the ground was built meant that the ground’s design was somewhat perfunctory in nature.

Famed for its low-hanging roofs and box like appearance, the record attendance at Glanford Park was set on 22nd September 2010 when the Irons lost 5-2 to Manchester United in the league cup, and another match against Manchester City in the previous season also drew a similar sized crowd.

Currently there are no plans to expand or renovate Glanford Park. The last remaining terrace known as “Doncaster Road End” was due to be converted to seating after the 2009/2010 season however the club failed to spend three seasons in the Championship and thus weren’t legally required remove all terracing.

Below is a seating plan of Scunthorpe United's Glanford Park: 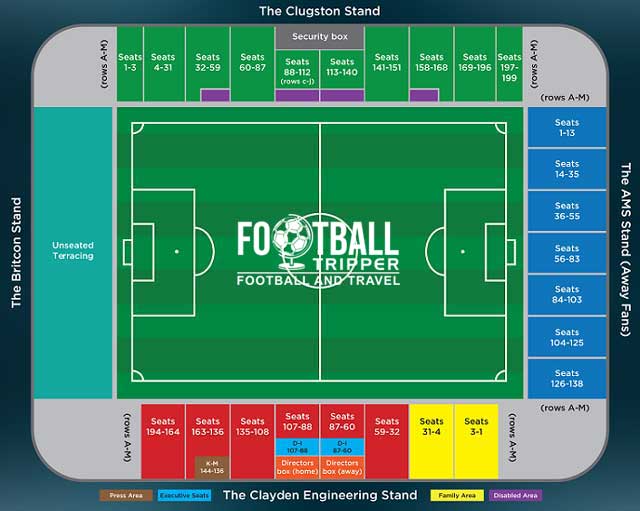 The stands at Glanford Park are as follows: The AMS Stand (North) for away fans, The Clayden Engineering Stand (East), The Britcon Stand (South) and the Clugston Stand (West).

Away fans who visit Glanford Park are housed within the South Stand which is located behind the goal-end.

An allocation of 1,650 is issued as standard but if the traveling contingent is expected to be larger then additional seating is made available within the southernmost section of the Whitegates Main Stand.

Whilst Glanford Park is fully enclosed, there aren’t actually any corner seats, so although you could argue it was slightly pointless, it does actually serve to help the match day atmosphere.

Combined with a boxy-roof which appears to hang rather low, the noise generated by both sets of fans during the match is retained well inside the ground.

First opened in 1988s perhaps before the advent of the modern, post-Hillsborough stadium, the one drawback of Scunthrope’s stadium is that there is an over-reliance on beams to support the roof which can restrict some views inside the ground. However the atmosphere more than makes up for this.

Located out of town there aren’t too many drinking options before and after the match, with the Old Farmouse Fayre & Square chain probably the most popular choice.

Mainly filled with home fans, the pub does permit away fans to enter providing they aren’t wearing prominent colours.

Five minutes further along Doncaster Road is The Berkeley Hotel which is usually slightly more popular with the travelling contingent.

West of the ground close to Althorpe station on the River Trent there is the Ironstone Wharf which is some fans regard as a hidden gem, although it is 1.5 miles or so away.

There is also a Frankie & Benny’s restaurant which has a bar which might be worth trying, if there’s a small number of you.

At the ground itself there is The Iron Bar which is open on weekend matches from 12.30 pm although visiting fans should note that this is only for home supporters. N

As Glanford Park is more or less situated within a retail park there are a handful of uninspiring options such as KFC, McDonalds, Costa Coffee and Pizza Hut in addition to a Tesco Extra.

Inside the ground there are refreshment kiosks are located in the concourse near the corner of each stand with an additional stall located centrally within the Clugston Stand.

Scunthorpe have a club shop at Glanford Park stadium as well as an official online store known as  The Iron Club Shop.

On match days the store remains open for approximately 30 minutes after the full time whistle.

It doesn’t appear as if Scunthorpe United FC currently offer fans the chance to undertake a stadium tour of Glanford Park.

How to buy Scunthorpe United Tickets

Tickets to see Scunthorpe can be purchased in one of three ways: telephone (Call 0871 221 1899. Press Option 1 then Option 3), in person at the Glanford Park ticket office (Open Monday to Friday from 8.30 am usually until 5.00 pm), and on the internet from Scunthrope Online Ticket Office.

Ticket Prices for League One are as follows:

** Members of the club receive around £3 discount per ticket so if you’re planning on attending a few matches this could be financially viable for you.

How to get to Glanford Park

Where is Glanford Park?

Glanford Park is located within an out of town retail park approximately 2 miles west of Scunthorpe city centre, a few hundred metres from the the M181 motorway.

There is a large car park at the ground with spaces available at the bargain price of just £3.00.

Scunthrope station is located in the city centre just over 2 miles east of Glanford park with the journey likely to take slightly over 40 minutes by foot.

Once you have arrived turn left out of the station and proceed straight across the crossroads to Church Lane.

Proceed down Doncaster Road towards the retail park and at the next roundabout where there is a KFC turn left and walk in a straight line until you reach the stadium.

Five minutes north of the stadium on the retail park there is a Travelodge with The Berkeley Hotel located slightly further east at the next roundabout.

Back within Scunthorpe city centre there is a decent selection of hotels such as the reasonably priced Royal Hotel, The Bridge Hotel and The Wortley House Hotel which is close to the local train station.

Who plays at Glanford Park?

What is the capacity of Glanford Park?

As of 2023 Glanford Park has an official seating capacity of 9,088 for Football matches.

When was Glanford Park opened?

What is the postcode for Glanford Park?

The postcode for Glanford Park is DN15 8TD.

Covid Restrictions may be in place when you visit Glanford Park in 2023. Please visit the official website of Scunthorpe United for full information on changes due to the Coronavirus.