St James Park is a purpose built football stadium located in the Devon based city of Exeter.

Not to be confused with Newcastle F.C’s stadium which is also called St James Park, this smaller 8,541 capacity ground is home to Exeter City Football Club and first opened back in 1904.

St James Park in Exeter is built on a piece of land which was for over 250 years used for Pig Farming. The local Baroness owner Lady Anne Clifford supposedly used the proceeds of rent to fund the apprenticeship of poor children from the St Stephen’s Parish as far back as in 1654.

Exeter United FC began using the site for a football stadium in 1904 after merging with St Sidwell’s United and agreeing a leasing deal which amusingly stipulated that “no menageries, shows, circuses or steam roundabouts” were allowed on the land.

Early visitors such as Stoke in 1909 and Reading in 1910 refused to play their drawn FA Cup fixtures against Exeter United as the ground was deemed to fall well short of regulation length, and it wasn’t until a decade later in 1920 when the club were able to purchase the land to the east of the ground that The Grecians could adequately extend their pitch size.

A year afterwards in 1921 the club were able to outright acquire the land after selling Dick Pym to Bolton which put the club in a strong financial position for most of the 20th century with modest expansions occurring as required.

However in the 1990s the club encountered financial difficulties and were forced to sell the stadium to the local Exeter City Council.

With finances limited, The rebuilding of the Big Bank Stand in 2000 and the conversion of the Cowshed Terrace to all-seating in 2001 are the two most recent redevelopments to have taken place.

It was only after Exeter were drawn against Manchester United in a third round FA Cup match at Old Trafford in 2005 that the club could finance routine repair work.

Below is a seating plan of Exeter City's St James Park: 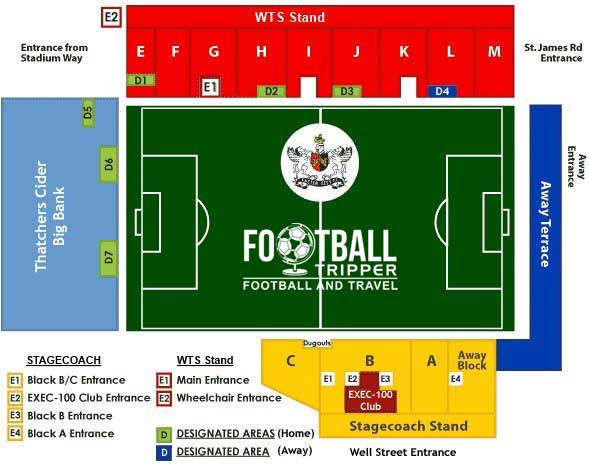 The four stands at St James Park are as follows: The Cowshed (North), The Cliff Bastin Stand (East), St James Road Terrace (South) which is used by away supporters and the old Grandstand (West) which acts as the family stand.

Away fans are usually housed in the St James Terrace which has room for just over 1,000 fans, with the Stagecoach Stand occasionally used for games where the away contingent is expected to be larger with up to 150 seats available within this grand stand.

The terrace section is uncovered and thus can be cold during the Winter fixtures with some fans reporting of poor views of the pitch due to the way the stand is almost “sunken” into the ground.

The seated area has none of these problems although with the luxury of the roof comes a slight problem – the pillars occasionally get in way of your view.

At the stadium there is a club run supporters bar which is open to both sets of fans with alcohol also available within the concourses of each stand.

This is probably your best bet as the only other pub close to the St James’ is The Well Tavern which is popular on matchdays and located on Well Street. On derby days and big matches such as against Plymouth Argyle away fans may be refused entry to the more popular pubs.

Back within the city centre there are numerous pubs including the Victoria on Victoria Road around 15 minutes away from the main stand, the village-esque Bowling Green Pub on Blackboy Road and two pubs on Sidwell Street, Duke of York and The Amber Rooms.

The majority of food options are located on Old Tiverton Road which runs to the East of the stadium. Past the roundabout back towards town there is a KFC, Domino’s Pizza and numerous chip shops such as The Paradise Tandoori.

Inside the ground expect to find the usual range of food options such as chips, burgers, sausage rolls and variants of the perfunctory pie.

The Grecians run a club shop at St James Park Stadium in addition to their own official online site, ECFC Shop.

For more information, to confirm opening times or to check availability feel free to send an email to [email protected] or phone the store on 01392 425885.

The Supporters Trust offers fans and anyone interested in learning a bit more about Exeter City F.C free stadium tours of the facilities at St James Park.

For more information and to see the current tour schedule please visit this page on the Trust’s website.

How to buy Exeter City Tickets

Tickets to see Exeter City at home can be bought from the usual channels including telephone (01392 411 243 (opt 3),  in person at the St James’ reception (Weekdays 9.00am – 5.30pm) and on the internet by visiting the club’s online ticket sales page.

Please note that tickets purchased on the day at the stadium carry a premium of anywhere between £2 to £5. You’ve been warned.

How to get to St James Park

Where is St James Park?

St James Park is located approximately 1 mile north-east of Exeter city centre a few hundred metres south of the nearby railway station of the same name.

St James Park Stadium address for sat-nav is as follows:

There are however numerous car-parks within ten or so minutes of the stadium with this helpful map having a decent summary of locations and prices.

The stadium is served by St James Park (Exeter) railway station which literally shares a road with the western (Stagecoach Family) stand, making it extremely accessible to visiting football fans.

Situated on the Avocet Line which First Great Western trains operate, it takes around 5 minutes to get to Exeter Central station which then has connections to the rest of the United Kingdom including direct train routes to London, Birmingham and Bristol.

The closest hotels to St James Park are the Melbury Guest House and Jurys Inn Exeter Hotel with more options available the further you travel west towards the River Exe.

Examples of these options include the Clock Tower Hotel, The Thistle Hotel and Oakcliff Bed & Breakfast.

Who plays at St James Park?

What is the capacity of St James Park?

As of 2022 St James Park has an official seating capacity of 8,696 for Football matches.

When was St James Park opened?

What is the postcode for St James Park?

The postcode for St James Park is EX4 6PX.

Covid Restrictions may be in place when you visit St James Park in 2022. Please visit the official website of Exeter City for full information on changes due to the Coronavirus.