Huish Park Stadium is the home ground of current League one side Yeovil Town Football Club. Located in the south-west region of Somerset in England, Yeovil’s ground has a total capacity of 9,565 which includes 5,212 seats, and two large terraces behind both of the goals.

Huish Park first opened on the 4th August 1990 with the inaugural match held against Newcastle United. Ending in a 2-1 defeat, the first competitive league went much better for the club, with The Glovers defeating Colchester United 2-0 in the Football Conference.

Attracting an average attendance of 2,639 in its maiden season, a number which represented an 17.6% increase in supporters, the ground instantly proved to be a success story. Consisting of two all-seater stands and two goal-end terraces, Huish Park has seen the Glovers rise from Conference level football to League One, the third highest tier in English Football in under 20 years.

Yeovil almost had the chance to make it to the Championship in 2008 when they played Leeds United in a play-off semi-final. Attracting a record crowd of 9,527 spectators, the home side narrowly lost 1 nil and ultimately failed to reach the final at Wembley.

Inheriting its name from the old Huish Athletic Ground, Huish Park is located within the Houndstone area of Yeovil on the site of a former Army Base. Famous for having an 8 foot slope to the side, the site of the old ground is now a Tesco Hypermarket after the club sold it to property developers for £2.8 million which was almost double the original figure quoted in 1985.

The money raised through the sale covered a significant portion of Huish Park’s £3.5 million cost, and after the club had secured the remaining funding, planning permission was granted on the 21st March 1989. Since opening, the only notable renovation to date has been the addition of a roof over the home terrace in 2001 which is perhaps testament to the design of the new ground.

Below is a seating plan of Yeovil Town's Huish Park: 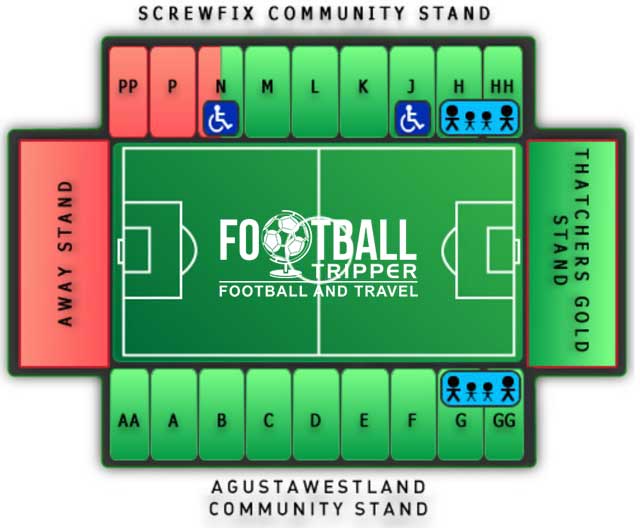 The four stands at Huish Park are as follows: Radio Cabs Stand (North) for away fans, Screwfix Community Stand (East), Thatchers Gold Stand (South) and AgustaWestland Community Stand (West) which is where the club’s facilities are located.

Visiting supporters by default are housed in the Copse Road stand behind the northernmost goal-end. As this is a terrace section, Yeovil also allocate a small number of seats (Blocks P and PP) within the nearby Screwfix Stand which can be accessed via Gate A.

The default allocation for the terrace is estimated at around 1,500 and typically 600 seats or so are reserved for home supporters who either can’t stand or simply don’t want to. For many away fans, sitting may be more preferable as the Copse Road terrace is uncovered and in getting wet in the winter months is certainly no fun but priority is given to families, seniors and the disabled.

The two most popular pubs for fans visiting Huish Park are The Airfield Tavern and The Arrow, although I wouldn’t say that they are particularly close to the stadium at approximately 15-20 minutes away. The Airfield Tavern is located southwards on Buntford Lane off of Western Ave which runs confusingly to the East of the stadium. The Arrow is located next to Preston Primary School.

Within the immediate vicinity of the stadium Yeovil FC have often been know to erect a large marque for certain matches, allowing fans to shelter slightly from the elements and purchase a drink from a limited range of beer. Inside the concourses of the ground fans can also enjoy the expected range of bevvies.

There are snack kiosks located in each of the concourses within the stands where fans can purchase the usual range of matchday treats such as burgers, pies and warm drinks. Excluding this, dining options around the ground are extremely limited with those passing through Yeovil town centre from the train station much better placed to pick something up on the way.

Yeovil Town FC operate a club shop at Huish Park located in the main stand in addition to their own official online site,  The YTFC Shop. The opening times for the store at the ground are as follows:

For more information, to confirm opening times or to check availability feel free to send an email to [email protected] or phone the store on 01935 847877.

It doesn’t appear as if Yeovil FC currently offer fans the chance to undertake a stadium tour of Huish Park. If this changes, we’ll be sure to update this section.

How to buy Yeovil Town Tickets

Whilst Yeovil do not operate a tiered pricing system based on the opposition and levels of demand, they do categorise tickets based on how you purchased them. The cheapest way to get a ticket is always online followed by the box office (in person or phone) with the most expensive option being “matchday” i.e purchasing on the day of kick off.

How to get to Huish Park

Where is Huish Park?

The Glovers ground is located within the area of Lufton and its trading estate, approximately 2.8 miles west of Yeovil town centre, Somerset, South West England.

For a comprehensive array of Directions please visit Yeovil Town’s How to Find Us Page – it’s not practical for us to list all possible routes, and besides I suspect most people have Satnav’s nowadays.

There are several areas allocated for parking around Huish Park with this hastily put together map a decent indicator of where you can and cannot park.

Yeovil Town is served by two railway stations, Yeovil Pen Mill which has services to Bristol and Birmingham, and Yeovil Junction which is connected to London Waterloo and Exeter. Both train stations are located in completely the opposite side of town from Huish Park at distances of 3.6 miles and 4.5 miles respectively making walking off the cards for most reasonably people.

The Premier Inn Yeovil Airfield hotel is the closest reliable looking option to the Huish Park but even this isn’t exactly that close at a distance of around 1.2 miles. Back towards Yeovil City centre there is the Manor Hotel, Green Room and Citylodge Yeovil with the usual suspects notable by their absence.

Who plays at Huish Park?

What is the capacity of Huish Park?

As of 2023 Huish Park has an official seating capacity of 9,565 for Football matches.

When was Huish Park opened?

What is the postcode for Huish Park?

The postcode for Huish Park is BA22 8YF.

Covid Restrictions may be in place when you visit Huish Park in 2023. Please visit the official website of Yeovil Town for full information on changes due to the Coronavirus.