Roots Hall is the home ground of current League Two football team Southend United. Located in the south-east county of Essex where it is the largest stadium, the 1955 built arena has a current capacity of 12,392. There are rumours that Southend could soon move to a new stadium at Fossetts Farm but no work has begun as of 2015.

Southend United’s relationship with Roots Hall dates back to their formation in 1906 when they initially used the site for their home fixtures until the outbreak of the First World War when it was taken over by the army. Used for the storage of munition supplies, after the war ended, the club relocated to a new site on Kursaal Park with Roots Hall literally becoming a tip or rubbish dump.

In the 1950s the club temporarily located to Southend Stadium off of Sutton Road but lacking the necessary ownership to improve the facilities, the club elected to explore their options. This ultimately lead Southend to purchase the wasteland on the old Roots Hall site and to build a new stadium there over a three year period between 1952 and 1955.

With the onset of financial difficulties in the mid 1980s followed by the Taylor Report a decade later, Southend United struggled to improve their stadium inline with Football League regulations. Terraces were replaced with seating in dribs and drabs, and slowly but surely the facilities became on par with those of other clubs in the League.

In spite of the progress made with the stadium, The Blues proposed to move to a new ground at Fossetts arm in January 2007. Although planning permission was granted by both Southend and Rochford councils, progress appears to be moving along at a non-existent pace due to a lack of capital.

Below is a seating plan of Southend United's Roots Hall: 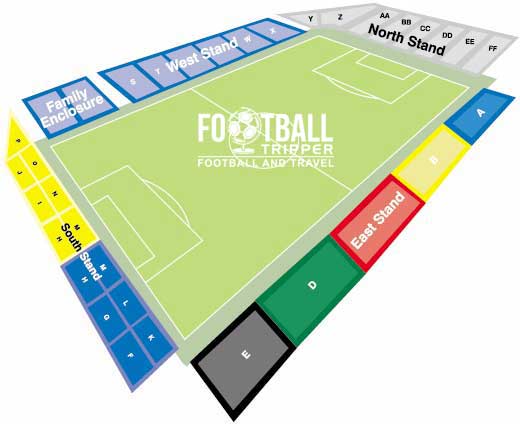 Away fans are housed in the North Bank which has a total capacity of 2,248, although typically only around 1,200 places are allocated for traveling supporters. Located behind the northern goal, this stand was a former terrace and the compact nature of the impromptu seating arrangement definitely reflects this, with the spacing very cosy to say the least.

Combined with a low-roof, a decent atmosphere can be generated by the away fans with the stand accidentally carrying good acoustics, although the matchday experience is somewhat soured by the intrusive nature of the 10 or so support beams which make the roof possible.

Note: Access is granted through turnstiles 13, 14, 15 and 16 which are located on Fairfax Drive.

Roots Hall is served by four bars around the ground in addition to the West Stand Bar which can be accessed through turnstiles 21-26.

Within the east stand by the stairs at the top car park there is the Shrimpers bar which the club’s website specifically states is open to away fans, and above this there is the Far Post Bar. In the north-east quadrant near turnstiles 8-12a there is the Groundsman’s Arms, with the West and Family Stands are having their own drinking areas.

For home fans The Spread Eagle located on Victoria Avenue is usually one of the more popular pubs nearby with a slew of bars located 10 minutes away on the A13 London road such as The Plough and The Trading Room.

Around the stadium there is the usual array of fine dining options including the West Bar Burger Unit and Sammy’s Snack Shack opposite the family room in the south stand. Each corner of the stadium seemed to have some type food stall so you certainly won’t starve on your trip to Southend’s home, with numerous takeaways ranging from Chippies to Pizzerias situated nearby.

Southend United FC operate a club shop at Roots Hall located next to the Blues box office near the main entrance in addition to their own official online site, The Shrimpers e-Store.

For more information, to confirm opening hours or to check availability of the latest Essex fashions feel free to send an email to [email protected] or phone the store on 01702 351117.

It doesn’t appear as if Roots Hall currently offer fans the chance to undertake a stadium tour of Southend United FC. If this changes, we’ll be sure to update this section.

How to buy Southend United Tickets

Tickets to see The Seasiders can be purchased via the usual channels including telephone (08444 77 00 77), email ([email protected]), in person at the stadium ticket-office (Monday to Friday: 9.30 am – 5.00 pm) and on the internet by visiting Southend’s ticketing site.

Ticket Prices for League One are as follows:

How to get to Roots Hall

Where is Roots Hall?

Roots Hall stadium is located just off of Victoria Ave (A127) less than one and a half miles from the Thames Estuary/Coast.

Roots Hall Stadium’s address for sat-nav is as follows:

There is limited street parking around Roots Hall on matchdays and the club warn that Traffic Wardens operate in the area and will give tickets out to vehicles who defy parking restrictions innocently or not. The car park within the ground is reserved for officials of the club, players, guests and those with car park season tickets.

Your best bet parking wise is at the nearby Civic Centre on Victoria Avenue (SS2 6ER) which is free after 6.00 pm Monday to Saturday and on Sundays otherwise you’re looking at a few pounds. This is less than half a mile to ground with a fairly straightforward route to the stadium – north along the main Victoria Avenue for 0.4 miles and then Roots hall is on your left.

Lastly, you can pay £5 and park at the nearby Southend High School which can be located on Prittlewell Close (SS0 0RG) and is slightly closer to the ground than the Civic Centre.

The closest train station to the stadium is Prittlewell station which is served by trains from London Liverpool Street – meaning anyone visiting from around the country will likely have to transfer at this station. This station is located 0.4 miles from the ground which works out at stroll of around 5 minutes:

There is a Holiday Inn Southend right outside the airport but if you travel an equal distance south you reach the coast and centre of town where there is much more choice. The Westcliff Hotel and the Park Inn Palace both have sea views and are affordable with the Travelodge inland next to the train station potentially hard to beat for price.

Who plays at Roots Hall?

What is the capacity of Roots Hall?

As of 2023 Roots Hall has an official seating capacity of 12,392 for Football matches.

When was Roots Hall opened?

What is the postcode for Roots Hall?

The postcode for Roots Hall is SS2 6NQ.

Covid Restrictions may be in place when you visit Roots Hall in 2023. Please visit the official website of Southend United for full information on changes due to the Coronavirus.