The Boleyn Ground or Upton Park is the home ground of Premier League football team, West Ham United. The stadium has a modest capacity of 35,016 and there have been talks in recent years to relocate the club to the Olympic Stadium in East London following the 2012 Olympic games.

Boleyn Ground has been occupied solely by West Ham since the club’s formation in 1904, although the spiritual predecessor to the Hammers, Thames Ironworks, played at other local venues such as Browning Road in East Ham.

The official name of the ground allegedly comes from the fact that the plot of land used to be the location of a house owned by one of Henry VIII’s former wives, Anne Boleyn. However more often than not football fans know and refer to West Ham’s stadium as Upton Park.

Almost dating back to the start of the 20th century, Upton Park has undergone several face lifts over the years. Towards the end of the Second World War in August 1944 a V-1 flying bomb landed on the south-west corner of the pitch which caused the stadium a great deal of damage and required reconstruction.

Before the publication of the Taylor Report in 1990, the record attendance at Upton Park stood at 42,222 when West Ham took on Tottenham Hotspur in a 1970 Division One match. The renovation which occurred in the 1990s saw Boleyn Ground become full-seated and the capacity reduced to 35,016.

After examining the range of options for the club, and realising that there simple isn’t enough room for expansion, the Hammers are now set to move into the London Olympic Stadium at the start of the 2016-2017 season. The stadium will have an expected capacity of 54,000 and will mark an exciting time for the East London team.

Below is a seating plan of West Ham's Boleyn Ground: 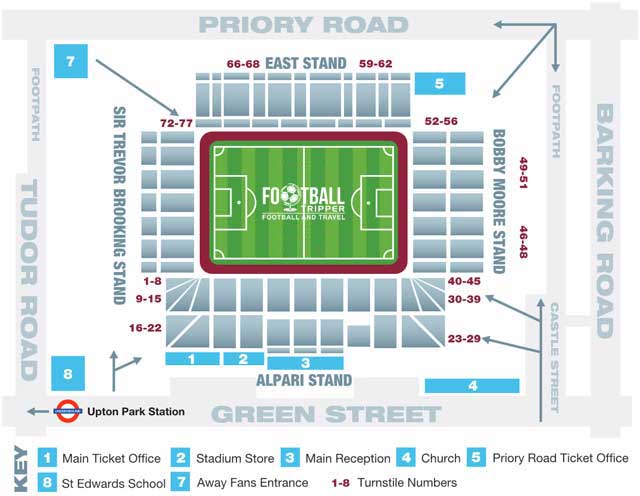 Upton Park is comprised of four sections: Sir Trevor Brooking Stand (North) which houses home and away fans, the east Stand where the changing rooms are located, Bobby Moore Stand (South) and Alpari Stand (West) which is the largest.

Traveling fans who make the trip to Upton Park are housed within the Sir Trevor Brooking Stand which was named in honour of the club icon in 2009. Situated towards the northern goal end, the stand is divided into two tiers although the visiting supporters only occupy the lower section with the standard allocation of 2,200 tickets.

The seats within the Sir Trevor Brooking Stand are comfortable enough with average amounts of leg room. The relatively steep incline across both tiers ensures fans feel close to the action on the pitch, with the biggest negative for away fans being the small size of the concourse.

This makes quickly grabbing a pint slightly harder than it should be, and going to the toilet at half-time although it’s hardly a problem endemic to West Ham.

The pubs on the roads surrounding Boleyn Ground should generally be avoided by away fans as they are often the locals of home fans. The largest of them all is the popular Boleyn Tavern, with the bars on Green Street and Barking Road also not ones you should consider.

If you stick to pubs near to the tube stations in general you can’t go too wrong safety wise. Millers Well which is a Wetherspoons pub is opposite East Ham Town Hall just off of East Ham underground station or failing this the Duke of Edinburgh near Upton Park Tube Station are two decent choices.

There is a large number of independent fast food joints between the tube stations and the ground with Green Street and Barking Road being two such roads littered with options. Always popular, there is a KFC 2 minutes north of Upton Park Tube Station as well as a Tesco.

Inside the ground, food and drink is available at slightly inflated London prices, albeit not as bad as The Emirates. As noted above it can be a bit tight for space at half-time, so maybe try and grab something before kick-off if possible.

West Ham operate a large superstore at Boleyn Ground in addition to the club’s official online store which you can use to scout your purchased before making your trip.

West Ham occasionally accept tours of 50 fans at a cost of £8.00 for season ticket members, £5.00 for children with prices increased by £2.00 and £1.00 respectively for non-members.

As tours of Upton Park seem to run sporadically rather than in set patterns it’s worth checking the official website for announcements, or perhaps phoning the club if you get a chance.

How to buy West Ham Tickets

Tickets for West Ham can be bought through the usual channels: online, telephone (0871 222 2700) and face to face at the ticket office at the stadium.

Note: Fans are occasionally able to purchase any unsold tickets on the day of the match, 2-3 hours before kick-off depending on demand/profile of the event. Of course it pays to book in advance to avoid disappointment.

How to get to Boleyn Ground

Where is Boleyn Ground?

West Ham are a famous cockney club which means they reside in the East of London, with Upton Park/Boleyn Ground being exactly 6 miles east of the center of the capital.

Parking wise it can be difficult getting off-road parking around the ground, as you’re in a densely populated urban area.

The best option for some fans appears to be Newham General Hospital which is located around 15 minutes away by foot. Parking costs around £4.00 for 6 hours which is pretty good value, although we’re not sure if the hospital strictly speaking would like football fans to occupy spaces.

London is served by a variety of large stations, and which one you arrive at depends purely on what part of the country you are travelling from.

As West Ham’s ground can’t really be reached by a reliable overground service, the station you book your train ticket for isn’t massively important. Having said, you could save a few minutes if you get a station on the Hammersmith and Circle lines, but it’s really not that beneficial.

For anyone visiting from abroad or other far-flung parts of the county you’ll be pleased to know that there are loads of airports close by. London City Airport is only 7 miles away, with Heathrow the second nearest at a distance of 14 miles away.

If you plan to make a weekend of it and take in some tourist attractions then you’ll probably want to stay more central.