Estadio Vicente Calderón was constructed in the 1960s to not only replace the dated facilities of Stadium Metropolitano (1923)  but to match the newly constructed Estadio Santiago Bernabéu. Like rival club Real Madrid, Atlético originally built the stadium with another name in mind (Estadio de Manzaneras after the nearby river) but eventually opted to rename it in honour of their then president Vicente Calderón in 1971.

Built on the banks of the river Manzaneras, fans initially objected to the location as it was deemed to be outside the city. Arguably one of the most unique stadiums in football, it even has the M-30 dual carriageway running beneath the main stand!

First opened in 1966 for a league match in October 1966 against Valencia which resulted in a 1-1, the stadium wouldn’t fully reach it’s expected 62,000 capacity until 4 years later in 1970 when additional funds could be generated to cover the unexpected costs of Europe’s first all-seater stadium.

Selected as one of the venues at the 1982 Spanish World Cup, and regular host of international matches for the Spanish national team, Vicente Calderón has been rewarded 5 star UEFA Elite Stadium since 2003, and was in fact the first Spanish ground to receive such classification.

Still, there are suggestions that Atlético are planning a move to new facilities located eastwards at the site of Estadio de la Peineta. With initial concepts only released in 2014 it will certainly be a good few years before any relocation happens.

Below is a seating plan of Atletico Madrid's Vicente Calderón: 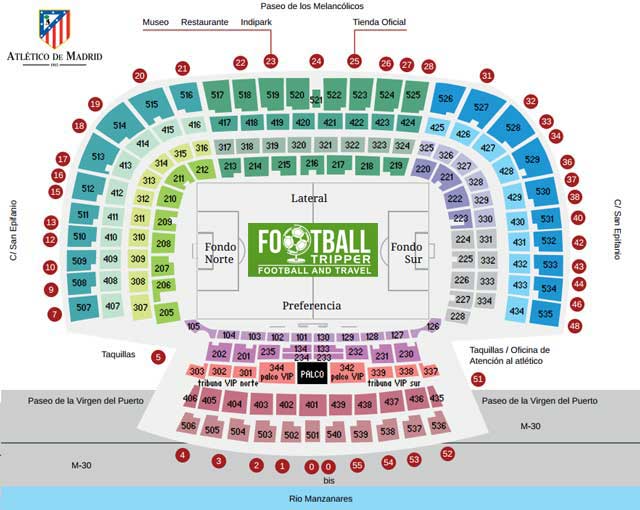 Away fans are usually housed within the upper tier of the south-east corner of Vicente Calderon, however as the standard allocation of tickets for domestic matches is so low it can be really hard to tell sometimes. Spanish football really doesn’t have the same “away day” culture as other countries such as England.

When it comes to Champions League matches the allocation is thankfully increased to a more respectable number typical of other the United Kingdom with the official ticket allocation for the semi-final against Chelsea in 2014 reported to be 3,071.

Tickets were priced between £38.00 – £79.50 for this occasion and are generally more expensive than matches of La Liga.

The centre of Madrid is chockablock with Sports Bars and Irish Pubs as shown by the map below although we only offer but a glimpse of the potential night-life the Spanish Capital has to offer.

The two bars we’ve marked near to Vicente Calderon are suitable for Atletico fans and neutrals who want to sample an authentic matchday experience whereas away fans are likely to have a better time drinking in the city centre beforehand.

Although located in a pretty unremarkable neighbourhood towards the South of the city centre, there are a few options nearby such as El Chiscón de la Ribera bar, El Rancho steak house and Parador watering hole.

Madrid being a global city and Spain having a distinctive cuisine, you’re spoilt for choice when it comes to fine dining – just not within the vicinity of the stadium.

As a result it may be advisable to get something to eat either before getting on the metro and making your way to the stadium for the match.

There are two main club shops in the city, one at the stadium itself (Opening times unknown) and one at Tres Aguas Mall which is an out of town shopping centre, south west of the city.

Anyone can take a tour of Atlético Madrid’s stadium Vicente Calderon for around €10.00 with access to the museum costing an additional €6 or €3 depending on whether you are under or over the age of 12 which is most definitely a bargain.

How to buy Atletico Madrid Tickets

Tickets to see Atlético can be purchased online, by phone +34 902 530 500, via certain cash points in the city and lastly at ticket windows outside the stadium a few days before the match begins.

For more information you can email the club at [email protected] or phone the ticket office at +34 (91) 366 4707, if you’re confident in your Spanish abilities.

How to get to Vicente Calderón

Where is Vicente Calderón?

Vicente Calderón Stadium sits on the north/eastern bank of the Manzanares River approximately 2.6km south-west of Madrid City Centre. Although walkable within 30 minutes, most fans tend to take the Metro service as outlined below.

With all of the excellent public transport options we probably wouldn’t recommend driving to the estadio yourself but Come to think of it, it may be worth driving to just so you can drive under the main stand! The address for satnav is:

The club has limited on-site parking reserved for those with VIP tickets, however it’s not clear whether or not there are any spaces available to the general public.

To find some independently run car parks head north of the river and drive along Calle de Toledo where there is the underground Garage 88 and other options.

The main train station is Madrid Atocha or Estación de Madrid Atocha which serves a number of routes across the country, making Madrid well connected nationally.

Technically closer than the Bernabéu, at just over 5 km, if you’re visiting Spain on holiday a day trip to the capital should definitely be on the cards.

If getting the metro and coming from North/City Centre you’ll want to get off at the Pirámides stop which is on metro line 5. It goes through all the main stops such as Ópera, Callao, and Gran Via and will leave you with a gentle 10 minute stroll to the ground.

The city of Madrid has the Adolfo Suárez Madrid–Barajas Airport which is the 6th largest in Europe and flies over 49 million passengers annually.

Based towards the North East of the city, the airport is approximately 15 km away from Vicente Calderón with either an EMT bus service or Metro line being your public choices upon arrival.

If you want the closest possible hotel to the stadium (God knows why you’d want to do this), then go for NH Ribera de Manzanares which can be found by following the river Northwards or the Holiday Inn Piramides which is slightly more inwards towards the east of the Estadio.

For those seeking accommodation closer to the city centre, you can’t go wrong with anything near the Plaza Mayor such as Hotel Europa, Persal and or Cortezo.