The new Estadio San Mamés is a recently constructed ground which replaced the old San Mamés in September 2013 with an increase of capacity of around 13,000 and more modern facilities. The Stadium will be publicly funded by the Basque Government, Bilbao city council and Biscay provincial council collectively.

Estadio San Mames held its first match on 16th September 2013 where Athletic Club Bilbao beat Celta Vigo 3-2, however only three quarters of the ground was ready in time for the season. Built on a plot of land adjacent to the old stadium with foundations even overlapping, San Mames of 1913, had been home to Bilbao for exactly 100 years previously, however the facilities which were rebuilt for the 1982 World Cup were now becoming dated.

Sharing not only a name but  a location with the original stadium of the club, Nuevo San Mames is the spiritual successor to the iconic Cathedral, and it has certainly become a place of worship in the short time since opening. Whilst construction of the ground began in 2010, the project proved to be an arduous journey which dated as far back to 2004 when the initial plans were unveiled.

Still, with the severe global recession of 2007-2008 and the negative impact on other team’s stadium projects such as Vicente Calderon and  Ramón Sánchez Pizjuán being thwarted by a lack of finance, it is a minor miracle that Atletic Club managed to construct anything at all. In fact, if it wasn’t for three public institutions (Basque Government, Bilbao city council and Biscay provincial council) stumping up 52.6% of the cost, the club would still be using the old San Mames arena.

To date the record attendance was set at the start of the 2015 season in August when Athletic took on SSC Napoli in a play-off match for qualification in the Champions League. Attracting 49,017 fans, the formidable atmosphere at the new stadium helped earned Los Leones earn a considerable cash windfall.

A month later on the 19th September 2014 it was announced that San Mames was chosen as one of thirteen venues for Euro 2020 which was set to be a pan-European affair. It is widely believed that San Mames will host three group stages and a round of 16 which will firmly put this stunning stadium on the map.

Below is a seating plan of Athletic Bilbao's Estadio San Mamés: 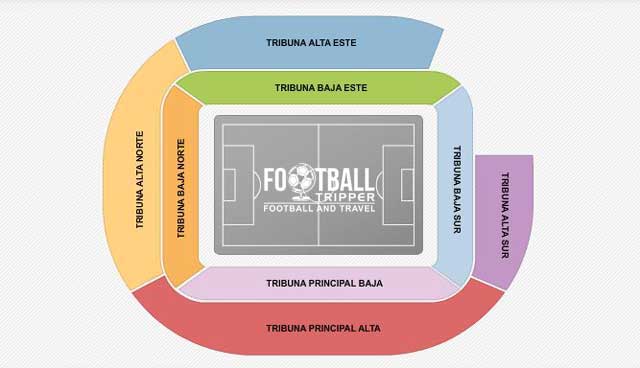 Away fans are usually housed within the missing section of the seating plan which is in the south-east corner of the stadium.

The local neighbourhood surrounding the stadium is full of independently run bars and cafes which fans like to frequent before the match. Just follow the red and white stripes to hang out with the locals at an authentic bar.

There is a strong commercial element which means there are a plethora of eating and drinking options, both before and after the match. Examples include La Cruz Blanca which does decent beer, and La Parrilla Argentina which is known for it’s steak.

If you really want to sample the better side of Basque cuisine then you’re better off heading to Casco Viejo which is the more traditional part of the city. There you can find a lot of restaurants which serve the regional cuisine such as Pinxtos (Tapas), Idiazabal sheep’s cheese, Txakoli sparkling wine and Safardotegi which is a type of basque cider.

Athletic Club  have 4 official stores around the city of Bilbao and Basque region n addition to their official online Tienda. The most popular one is of course at San Mames itself:

According to the official website, the tour will be open to visitors after phase 2 of San Mames has been completed.  If you recall the first few paragraphs which mentioned that the stadium was launched partially complete to avoid dragging it on for too long.

The old stadium contained Athletic Club Trophy cabinet and Exhibition Hall in the main grandstand, so it is likely to be a similar type of deal: Old memorabilia with trophies.

How to buy Athletic Bilbao Tickets

Tickets to see Athletic Bilbao can either be purchased online, via BKK cash machines on the day of the match or at the Taquillas (Box Office) at the stadium either a few days before the game, or for a few hours proceeding kick off.

Ticket prices vary depending on who’s playing football but a reasonable range to expect is between €28.00 – €110.00 for a top view at the sides.

How to get to Estadio San Mamés

Where is Estadio San Mamés?

Bilbao can be found in the Northern-Central part of Spain, approximately 14km south of the famous Bay of Biscay, with the Nuevo Estadio San Mamés being located 2km east of the old city centre and only a 15 minute away from the iconic Guggenheim museum.

With 13 bridges traversing the river which runs through the city, driving to San Mamés is easy with the AP-8 Motorway connecting the city to the European road network, and A-8 motorway to Northern Spain, all you have to do is look for exit 117 Bilbao and you’re sorted.

There is only room for guests of the club on matchdays which means the general public is encouraged to park elsewhere. Parkopedia is usually a decent site to visit as it lists nearby parking spots and garages.

Estación del Norte (“North Station”) known by it’s proper name as Estación de Abando Indalecio Prieto or even Bilbao-Abandoa (Prior to a 2006 name change) locally based in the Abando district of Bilbao, is the largest and best connected train station in the city.

Boasting a shopping mall, a dozen restaurants and bars, this train station not only has direct access to the metro but access to several other railway routes throughout not only the region of Basque but Spain itself.

Bilbao Airport is the main international airport in the Basque County with an estimated 4 million passengers flying either in or out of Spain to over 15 European destinations.

Located a mere 12km north of the city, the BizkaiBus line 3247 will take you to the city centre in under 20 minutes, with buses departing every half an hour or so.

There are a lot of decent hotel choices within the surrounding environs of San Mamés including the imaginatively named Hotel Estadio,the  den of iniquity Pil Pil Hostel and the more respectable Meliá Bilbao.

Nearer the city centre try something like Ercilla Hoteles, or the Hotel Ibis Bilbao Centro. Budget obliging of course.

Who plays at Estadio San Mamés?

What is the capacity of Estadio San Mamés?

As of 2023 Estadio San Mamés has an official seating capacity of 53,331 for Football matches.

When was Estadio San Mamés opened?

What is the postcode for Estadio San Mamés?

The postcode for Estadio San Mamés is 48009.

Covid Restrictions may be in place when you visit Estadio San Mamés in 2023. Please visit the official website of Athletic Bilbao for full information on changes due to the Coronavirus.