Campo de Fútbol de Mendizorroza or Estadio Mendizorroza is the home ground of Segunda División staple Deportivo Alavés. Opened way back in 1924, the 19,840 capacity ground is located in the Vitoria-Gasteiz city within the Basque Country.

The first iteration of Estadio de Mendizorrotza dates back to 1924 when it was first opened on 27th April, however the most recent version was built during the 1998/1999 season after Deportivo Alavés were promoted to the top flight of Spanish Football after an extended absence of 42 years.

Constructed on a site within Paseo Cervantes, the surrounding area has since been turned into a wider sports complex which contains municipally owned  facilities such as swimming pool and basketball courts.

Redesigned as a fully-covered, single-tiered bowl which is capable of seating 19,480 supporters, the roof incorporates a scoreboard into it which is very much reminiscent of Tottenham’s White Hart Lane.

The highest level of football played at Estadio de Mendizorrotza undoubtedly came during the 2000/2001 season when Alavés played Liverpool FC at Dortmund’s Westfalenstadion in the 2001 UEFA Cup Final.

En-route to the final Mendizorrotza hosted a diverse range of European clubs including the likes of Gaziantepspor, Kaiserslautern, the Madrid based Rayo Vallecano and the Norwegian duo of Lillestrøm and Rosenberg. The highest attendance of 17,307 which was recorded during the thrilling 3-3 draw against Internazionale in the first leg of the fourth round.

Below is a seating plan of Alavés's Estadio de Mendizorroza: 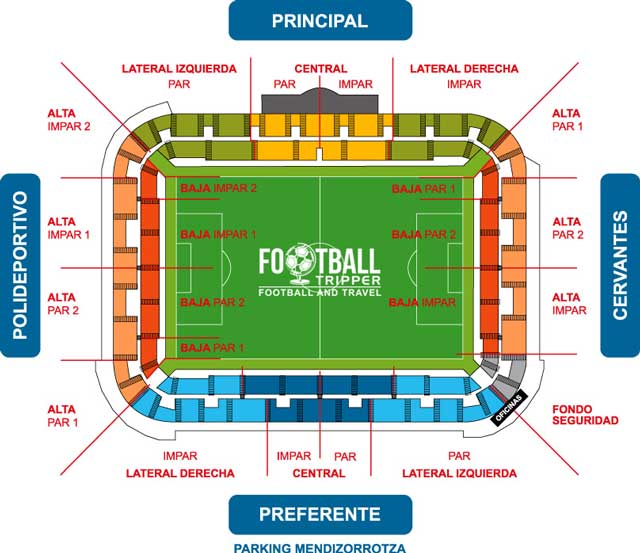