Lerkendal Stadion is a purpose built football stadium located in the city of Lerkendal in the Trondheim region. With a capacity of 21,405 it is the second largest stadium in the country, and its capacity is more than twice as large as 8 of the stadiums in the Tippeligaen. The ground first opened in 1947 and was last renovated in 2002.

Lerkendal Stadion first opened on 10th August 1947, a few years after the end of the Second World War as the city of Trondheim’s main sports stadium. Municipally owned, the stadium originally featured an athletics track around the perimeter of the pitch, however it was built over during the large-scale renovation which occurred at the turn of the millennium.

The ground was originally shared by SK Freidig and FK Kvik, and it wasn’t until 1957 that present day tenant Rosenborg BK moved in. The stadium developed  slowly over the course of the 20th century, with the construction of a fully-covered grandstand in 1962, and floodlights in 1968. The stadium’s capacity peaked during the 1980s with the final game of the 1985 season against Lillestrøm SK attracting a record crowd of 28,569.

After Rosenborg qualified tor the 1995/1996 Champions League, the club constructed a new northern stand in order to satisfy UEFA stadium regulations which no longer permitted standing terraces. Costing 32 million, the new stand debuted in the 1996 season which marked Rosenborg’s greatest ever performance in Europe by reach the quarter finals against Juventus, after qualifying from a group which contained Porto, AC Milan and IFK Göteborg.

Between 2000 and 2002 Lerkendal Stadion underwent a major renovation which saw the construction of three new stands to join the one which opened in 1996. Built on top of the athletics track which essentially removed it, the stadium was reconfigured as a dedicated football stadium. As a way of compensation the city of Tondheimspent 32 million upgrading Øya Stadionas the city’s main athletics venue.

As for the future of Lerkendal Stadium, it appears as if any future renovations are contingent on Trondheim being selected as a host city of a major tournament. Plans for an upgraded 30,000 capacity venue have doing the rounds since Euro 2008, and more recently Euro 2016, however both Nordic bids have failed. Rosenborg are reluctant to fund further expansions themselves due to declining attendances. 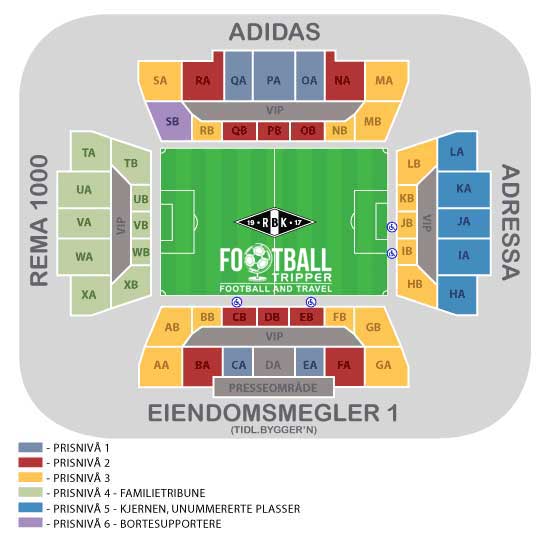 Rosenborg BK have a club shop at the stadium in addition to their own online store.

On matchdays the fan shop opens from 10.00 am until kick-off and then for 30 minutes after the full time whistle.

It doesn’t seem as if you can take tours of Lerkendal Stadium which is certainly a bit of a shame.

How to buy Rosenborg Tickets

Tickets to see Rosenborg BK play at home can be purchased online from the official website and from the box office at the stadium which opens from 12.00 pm on matchdays.

How to get to Lerkendal Stadion

Rosenborg BK’s stadium is located in the Lerkendal district of Trondheim approximately 2.5 km south of the city centre around the northern bank of Nidelva River.

There is a fairly large car park located behind the main stand however the exact matchday parking arrangements are unclear.

From Trondheim Station you can catch an overground service to Lerkendal Station which is right outside the stadium.

Trondheim Airport is situated less than 20 km east of the city centre and is served by many international airlines and routes. Upon landing you can catch a train from the dedicated airport station into the city centre.

Within the wider sports park of Lerkendal there is the Scandic Hotel Lerkendal which towers over the stadium. Within the city centre there is the likes of Best Wester Chesterfield, Comfort Hotel Park and a Radisson Blu Royal Garden Hotel.

Who plays at Lerkendal Stadion?

Norwegian side Rosenborg play their home matches at Lerkendal Stadion.

What is the capacity of Lerkendal Stadion?

As of 2022 Lerkendal Stadion has an official seating capacity of 21,405 for Football matches.

When was Lerkendal Stadion opened?

Lerkendal Stadion officially opened in 1947 and is home to Rosenborg

What is the postcode for Lerkendal Stadion?

The postcode for Lerkendal Stadion is 7031.

Covid Restrictions may be in place when you visit Lerkendal Stadion in 2022. Please visit the official website of Rosenborg for full information on changes due to the Coronavirus.